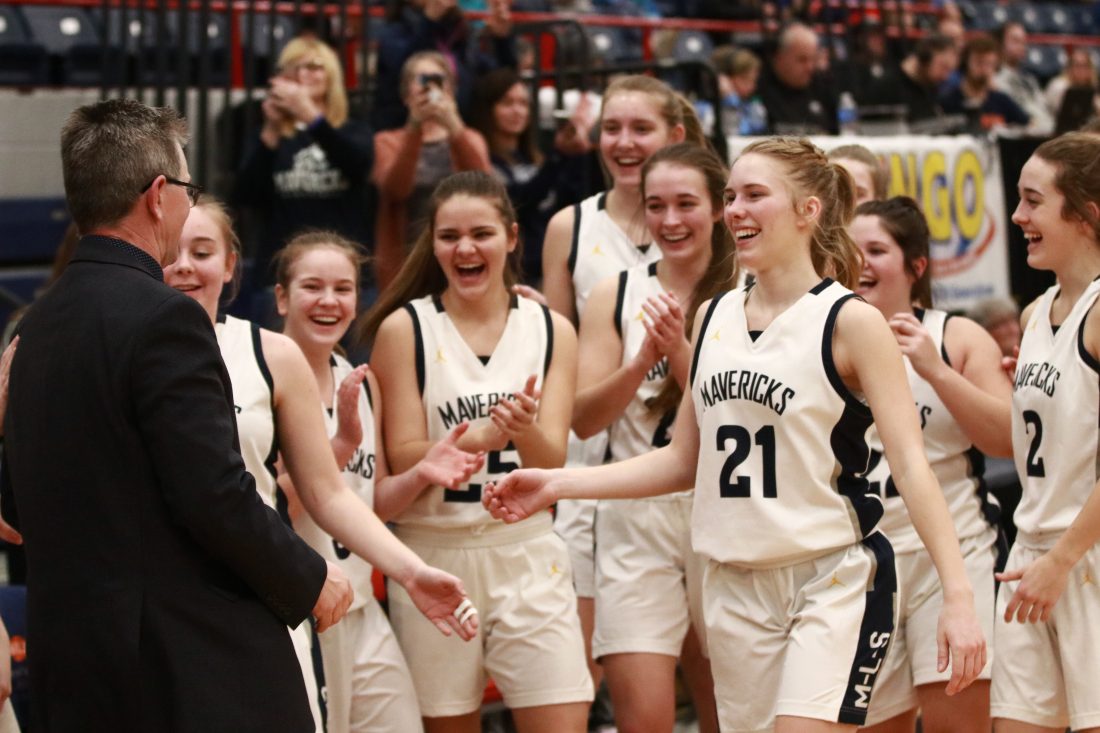 Feeding the post became the name of the game.

The Mohall/Lansford/Sherwood girls basketball team’s robust paint presence helped the Mavericks capture the District 12 Tournament title on Saturday night. No. 1-seeded MLS (21-1) used a second-half surge in its 50-37 win over No. 2-seeded Our Redeemer’s (15-7) at the Minot Municipal Auditorium.

“It’s kind of a culmination of the year,” MLS head coach Wayne Brackenbury said. “You work for these things. The kids have put in the time. For my seniors, it’s their third championship game. They’ve won two out of three. I told them in the locker room, ‘If you can win two out of three championships when your career is all said and done, that’s pretty good.'”

Although the Mavericks earned a double-digit victory in their season’s most important game to date, the path to the championship became a bit bumpy. Early on, the Knights proved their mettle through stellar outside shooting.

ORCS senior guard Hailey Roberts made two 3-pointers in the first quarter and finished with a team-high 17 points. The Mavericks and Knights battled to a 14-14 tie after one quarter.

With MLS leading 25-24 in the final seconds of the second quarter, senior forward Janie Savelkoul energized the Mavericks’ bench. As the clock ticked down, Savelkoul took a few steps past half-court and sank a buzzer-beater.

“She did everything right,” Brackenbury said about Savelkoul’s heave. “You want to keep it in the middle of the floor to give yourself a straight-on shot. That’s our ‘pop shot,’ we call it. We finish every practice every Wednesday with a half-court shot. A little practice doesn’t hurt.”

After the theatrics subsided, Brackenbury urged the Mavericks to work the ball inside the painted area. MLS freshman center Allison Undlin established herself and engineered the Mavericks’ offense.

“If we can let the posts touch it and kick it back out, then everybody has the green light,” Brackenbury said. “The posts need to touch the ball almost every time down the floor. Otherwise, you get to the point where you’re just firing shots up after one pass and two passes. Then, guess what? You’re going back and playing defense all the time. You don’t want to do that.”

Undlin showed off her range in the third quarter and buried a 3-pointer in the left corner. The Mavericks’ floor spacing proved vital in the second half.

“We really wanted to just push, work hard and have our eyes on the prize,” Undlin said. “District champions.”

The Mavericks’ aggressive style kept the Knights in check. Although ORCS put together a gritty last-ditch effort in the final minutes, MLS dribbled out the clock for the victory.

“There are always ups and downs,” Undlin said. “If you come out as a team, you can do anything.”

After the game, ORCS head coach Scott Peterson gave a holistic overview of the Knights’ performance.

“I felt our defensive intensity was awesome tonight,” Peterson said. “They beat us up on the boards a little bit. That’s what I think we’re going to take out of this. Even though we’re smaller, we have to rebound. I thought we did a decent job. We got defensive stops, but then they got the rebounds.”

Both teams will participate in the Class B Region 6 Tournament at the Auditorium. ORCS will face District 11 No. 3-seeded Westhope/Newburg at 4:30 p.m. on Feb. 24, while the Mavericks will square off against District 11 No. 4-seeded Bottineau at 6 p.m. that evening.

DLB junior center Brooklyn Benno scored a game-high 24 points for the Lakers. The Panthers will face the other Panthers, District 11 No. 2-seeded Rugby, at 7:30 p.m. on Feb. 24.

Surrey junior guard Katie Aberle finished with a game-high 22 points. The Lions will tangle with District 11 No. 1-seeded Velva at 3 p.m. on Feb. 24.