Minotauros brush back Bruins, race to the playoffs heating up 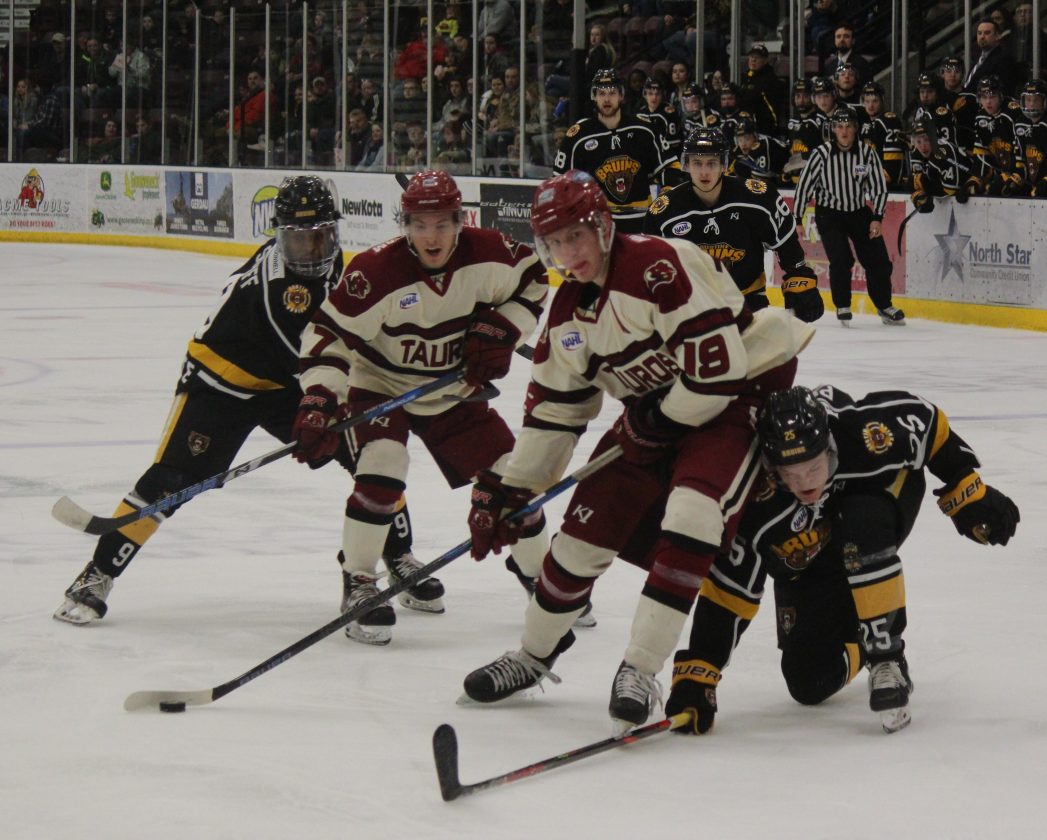 Through 40 games, a pair of Central Division foes — the Minot Minotauros and Austin Bruins — held identical records at 22-12-6 (50 points). A tight divisional table also had the Bismarck Bobcats sitting on 50 points in a three-way tie for second place before Saturday’s games.

The Bobcats beat the division-leading Aberdeen Wings 3-1 to keep their spot, and the Minotauros kept pace in the race for home-ice advantage in the first round of the NAHL playoffs.

Minot scratched out a 5-2 win, which included two empty-net goals, Saturday evening over the Bruins at Maysa Arena.

“Kind of a playoff-type game and obviously the 5-2 score really isn’t indicative of the type of game it was,” Minotauros head coach Marty Murray said. “It was right down to the wire. We found a way.”

A rather uneventful first period produced a goal with 1:49 left before the break. After the Minotauros wasted its first power play, a sudden 2-on-1 opportunity surfaced.

Cody Sherman looked over his option with the puck and decided his best bet was to shoot. He was correct.

Sherman’s second goal in his ninth game with the Minotauros put Minot up 1-0 going to the locker room.

“We always talk to our guys about the first two or last two minutes of a period,” Murray said. “To get (goals) at the end of the first and second periods were big. It gave us a lead going into the period breaks, which is huge for confidence.”

The Bruins capitalized on their first power-play opportunity to even the score at 1-1. Josef Mysak pounded in a rebound at the side of the net.

Minot regained the lead with 96 seconds left in the second period. Stationed in front of the net, opportunist Kevin Ness redirected a shot in from the right circle by defenseman Will Crull.

“Crull made a great play, and I kind of just tapped it,” Ness said. “Right place, right time kind of thing.”

Minot’s Dan Russell netted what turned out to be a crucial insurance goal with 11 minutes to go in regulation. From the slot, he picked out the top right corner over the shoulder of Bruins goaltender Brett Miller.

Five minutes later, Mysak struck again with a wrap-around goal for his second tally of the game, 3-2.

Last-ditch desperation eventually set in for Bruins as they pulled Miller out of his net with a little over a minute remaining.

Minot made them pay not once, but twice. Andranik Armstrong-Kingkade and Cade Stibbe picked up the freebie empty-net goals.

For Armstrong-Kingkade, it was his team-leading 24th goal of the season.

Minot goaltender Ben Garrity made 24 saves with the Minotauros outshooting the Bruins 27-26.

“Every night is going to be a battle,” Ness said. “So, we are going to bring it every night, and hopefully the results will come our way.”

The Minotauros travel to South Dakota next weekend for two crucial road games against the Aberdeen Wings. Puck drop at 7:15 p.m. on Friday and Saturday.