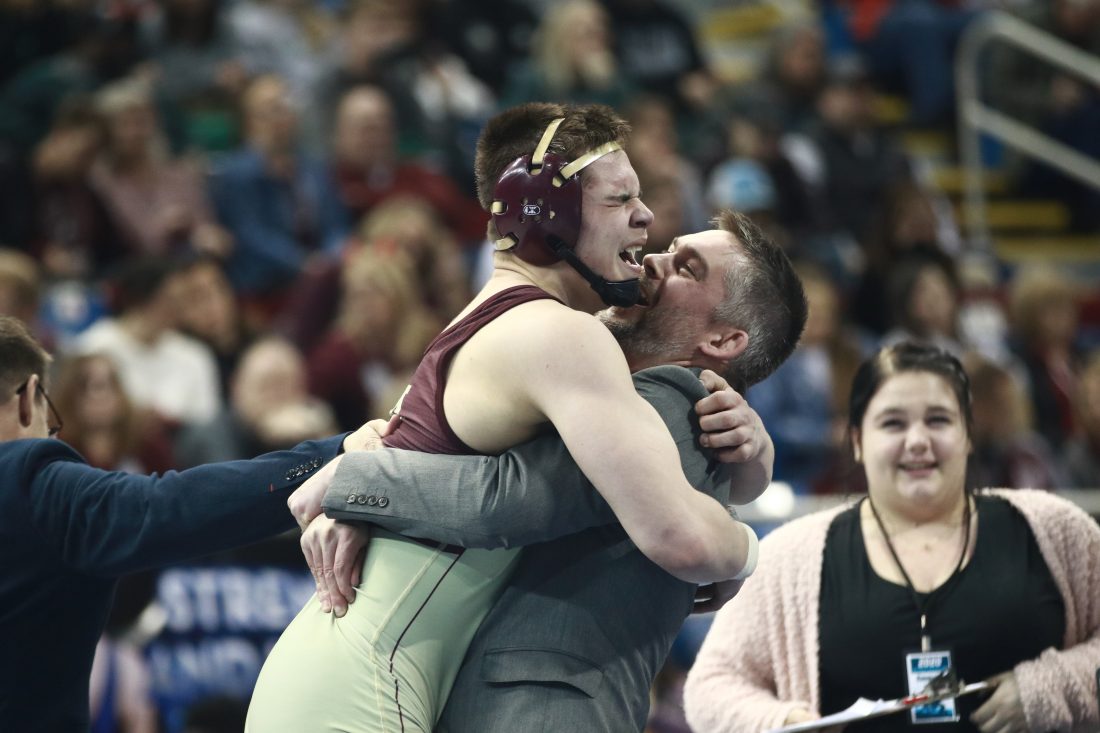 FARGO — Before Jacob Carmichael began his Class A Individual Tournament championship match on Saturday, the Minot High School senior morphed into a ball of energy.

The No. 2 seed bounced up and down like the Energizer Bunny — a force of perpetual motion with no intentions of slowing down. In the middle of his 195-pound bout against West Fargo Sheyenne senior Shane Kennedy, Carmichael’s buoyant attitude took a hit.

“I ended up hitting my head on the concrete,” Carmichael said. “For a little while, I was a little out of it. Then, I went back to reality. I was like, ‘I can win this match. Let’s get back out there and use this energy.'”

After persevering through adversity and pain, the Minot State commit earned an 11-9 sudden victory in his final high school match.

Carmichael built a healthy lead before the injury struck. He scored two takedowns in the first period and held a 4-2 advantage at the end of the round.

After recording an escape and another takedown, Carmichael’s lead grew to 7-2. Despite sustaining the injury, Carmichael kept his focus.

Hindsight is always 20/20, but his time off the mat may have been just what the doctor ordered.

“It was scary,” Minot head coach Justin Racine said. “I knew that the nerves had gotten to him. It was so early in the match… I could tell that he had just shut down a little bit. We’ve all been there when the nerves get to you. He gutted it out, and that’s a huge performance for him.”

Up 7-3 at the end of two periods, Carmichael saw his lead dwindle in the third. Kennedy won the period by a count of 6-2 after recording an escape, tallying two takedowns and receiving one point via a stalling penalty.

A late escape from Carmichael pushed the score to 9-9 and sent the match into overtime. With a sudden victory at stake, Carmichael picked up Kennedy’s right leg and hit the mat with authority.

That feat of strength clinched the victory. After recording the final takedown, Carmichael turned to the crowd and beat his chest several times.

“I didn’t believe it,” Carmichael said. “It felt like a dream. I didn’t know whether to cry, scream or jump around. It was amazing, man.”

The hard-earned sudden victory can be traced back to the summer. After the match, Racine lauded Carmichael’s offseason efforts.

“He took second last year and put it as a goal to be a state champion,” Racine said. “He put a lot of work in during the summer. He and Kelby (Armstrong) put the most work in during the offseason. It shows. Those two guys put in more work than anybody, and it showed on the mat.”

“Ever since I was young, coach always told me to trust the process,” Carmichael said. “I followed what he did. I put in the effort in the offseason, and it got me a state championship.”

Throughout the three-day tournament, Carmichael made it a point to hype up his teammates. Whether the Magi won or lost, he quickly provided an encouraging word to his wrestling brethren.

In a serendipitous moment, Carmichael’s win cemented an important milestone for the Magi. His victory gave Minot an edge in the individual team standings and helped the Magi leapfrog Bismarck Century in the second-place race.

Minot finished with 151 points, while the Patriots mustered 150.5 points.

“I’m feeling good,” Carmichael said. “Now, I’ve got it. I want to thank my family, teammates and coaches who got me here. It’s awesome.”