Majettes basketball stuns No. 2 Legacy in an instant classic 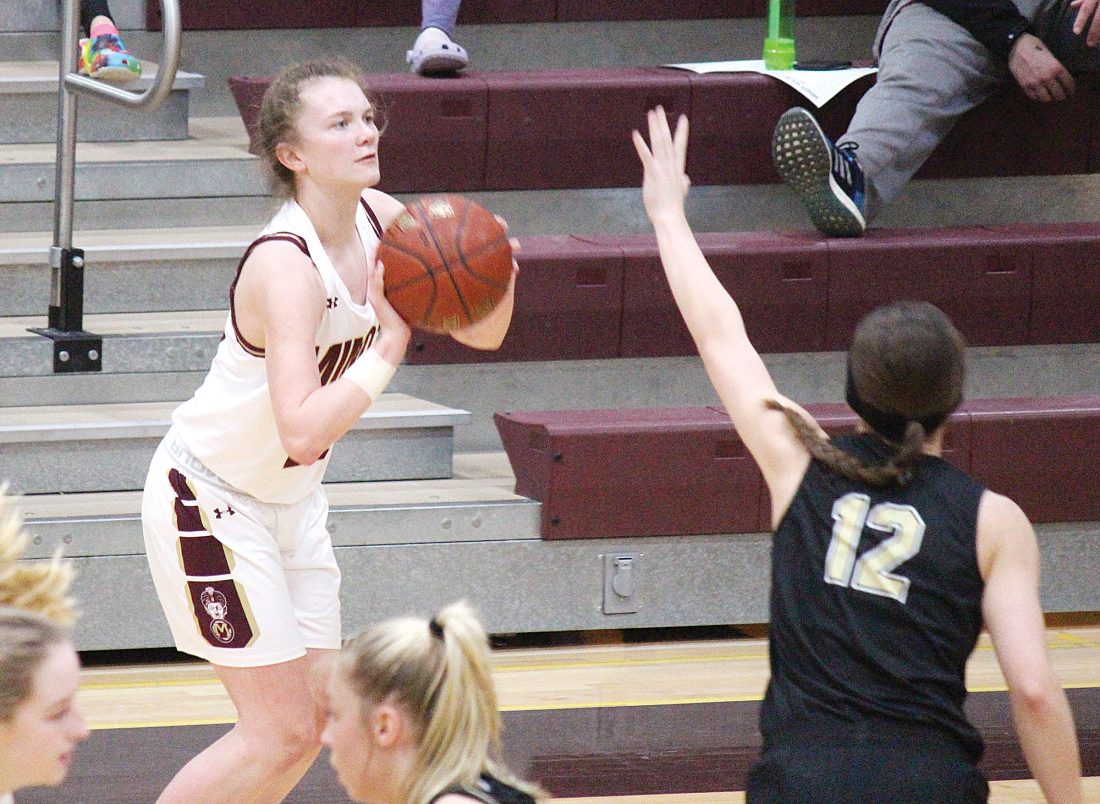 Weight of the game on her shoulders, Minot High senior Becca Tschetter stepped to the free-throw line. The Majettes trailed 52-51 with seven seconds remaining.

Trying to ice Tschetter before the front end of the one-and-one bonus free throws, Legacy called a timeout.

“Honestly, I was glad they took the timeout,” Tschetter said. “It gave me time to breathe and think about what I was going to do. The mechanics of the shot and everything.”

Cool, calm and collected, Tschetter sunk both free throws. Legacy raced up the floor and got two shots off at the rim, but neither fell.

“We needed the kids to start to believe,” MHS head coach Jason Schwarz said. “That’s one of the things we put on the back of their practice jerseys, so they saw it every day. We proved it right away that we were believing and fighting hard.”

The Majettes held the Sabers scoreless for the first 4:34 of the contest. But didn’t exactly take full advantage by only building up a 4-0 lead.

Legacy took control at 18-9, but the shooting of eighth-grader Avery Lunde and the post play of senior Allie Nelson clawed Minot back within a point.

“I think our sense of urgency and our intensity was unmatched,” Nelson said. “We were going for every ball, and we were just playing the hardest that we could.”

The Sabers still took a 27-21 lead into the break. Legacy’s Jaiden Baker and Arianna Berryhill continued to cause problems by driving into the lane. They combined for 19 points.

Nearly five minutes into the second half, both teams had only scored two points in the frame.

The Majettes used an effective 2-3 zone to stifle the Sabers. Legacy struggled to knock down any semi-open shots from behind the arc.

“The defense was awesome,” Schwarz said. “We go into every game wanting to play man-to-man. We weren’t doing all that bad, but we slipped into a zone, and we never came out of it until the very end… I’m comfortable with us playing man or zone. We are good at both.”

Tschetter sunk a triple with 10:44 remaining in the second half to even the score at 33-33. She was starting to heat up.

“I was just calling for the ball when Allie (Nelson) was getting tied up down low,” Tschetter said. “I made myself available for her and knocked them down when they needed to be.”

Both teams couldn’t be separated by more than four points the rest of the way. The intensity was only fueled by an electric environment inside the Minot High gymnasium.

Minot had a 45-42 lead with 3:11 remaining, but Alexis Dressler came to the Sabers’ aid. She buried multiple mid-range jumpers to keep the pressure on the Majettes.

With Legacy up 49-48, Tschetter hit another clutch 3-pointer — this one from the right corner — to give the Majettes the lead again with under 45 seconds to play.

Dressler had the answer. She drove to the rim, got fouled and made the layup. The three-point play gave Legacy the lead back with 27.5 seconds left. Dressler finished with a team-high 16 points.

Instead of spotting up another triple, Tschetter got aggressive and drove to the basket on the Majettes’ final possession. The senior picked up the foul and put herself on the line with the game on the line.

“I was thinking about how I do this every day in practice,” Tschetter said. “I’ve done it a million times. Why not just sink them now in this game?”

The Majettes wanted Tschetter to be in this position.

“There is no one else I would want shooting the ball in that moment,” said Nelson, who scored a game-high 17 points and grabbed nine rebounds. “I’m so proud of her. I knew with her going to the line that she would knock down two big ones for us.”