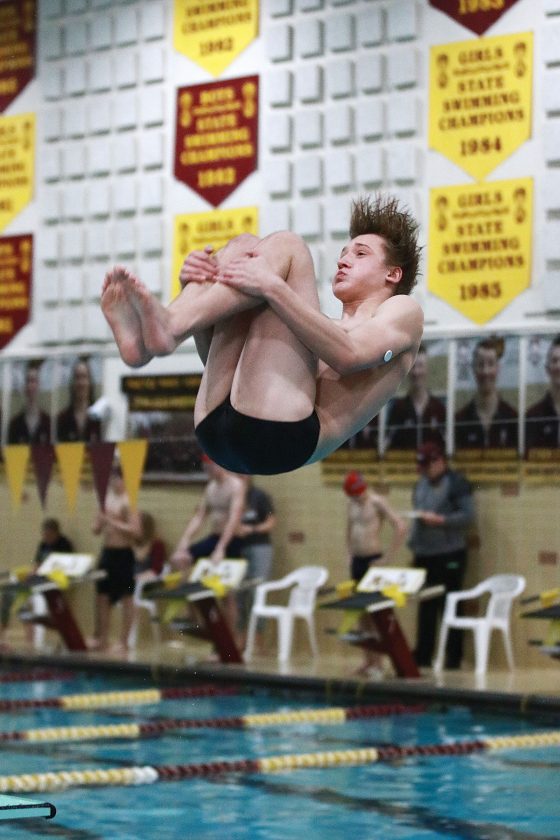 Jimmy Lafakis/MDN Minot senior Layton King completes his dive during the 1-meter diving event in Thursday's dual meet against Century in Minot. The Magicians captured a 128-57 win over the Patriots.

Familiarity can breed contempt, but it also offers advantages.

The Minot High School boys swimming and diving team added another chapter to its WDA rivalry with the Bismarck Century Patriots on Thursday night. The Magi rode a strong mid-meet stretch to the 128-57 dual victory.

“When there’s a guy from another team that’s swimming in the lane next to them at about the same time, they’re not nervous to get up and race,” Minot head coach Jake Solper said about the Magi. “The same would be true for the Century Patriots. They’re a team that has had a lot of success. They’ve got a great team culture, and they know how to get up and race as well.”

Dominic Yoder (2:01.94) earned a win for Minot in the 200-yard individual medley. Yoder dropped exactly one second off his qualifying time.

The Patriots responded with a win in the 50-yard freestyle. Will Dohrmann (22.77) secured the narrow win over Spaulding (23.00).

“It was kind of a good mixture,” Solper said. “Both teams had some success in multiple areas. It was just an enjoyable meet to watch.”

Minot’s William Walker-Rozo edged out Dohrmann (56.39) in the 100-yard butterfly. Walker-Rozo’s final time of 55.48 gave him the advantage.

Spaulding and Birnbaum squared off in the 100-yard freestyle. In the end, Spaulding (50.59) earned the close victory over Birnbaum (50.69).

“We have some definite advantages in our pool,” Solper said. “We’re pretty used to all the walls, the depth and the blocks. Things like that. There were a lot of great races.”

“We didn’t see many guys go really far backwards,” Solper said. “I think that’s a really positive thing. That can happen if we’ve been training just a little bit too hard. You teeter on that fine point of training at peak level and over-training. We really try our best not to ever overdo it.”

“I think what was even more impressive than what happened in the racing lanes was what happened over on the diving boards,” Solper said.

Minot’s Layton King saw an opportunity in the 1-meter diving event and seized it. King posted a final score of 273.40, an improvement of 28.65 points over his entry score.

When King came out of the water, the Minot crowd gave him a standing ovation. King took first place.

“Everything clicked today,” King said. “Like it should. I had a good day, I guess.”

Swimmers and divers alike also showed respect to King on his memorable day.

“It pushes me a lot more,” King said about the encouragement he received. “It makes me feel a lot more confident.”

Next up, Minot will travel to the Mandan Invite for an 11 a.m. meet on Saturday. The invite will take place at the Mandan Aquatics Center.

“I think our team did very well today,” King said. “I’m proud of all the other divers and swimmers.”