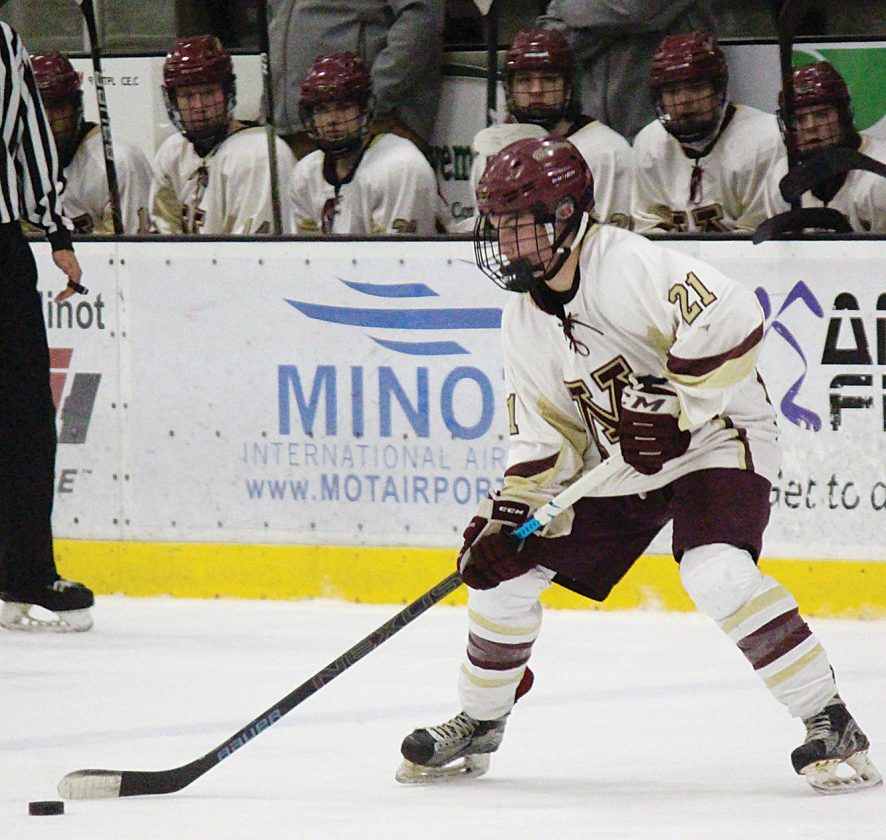 The Minot High School boys hockey team was less than two minutes away from cleaning out its locker room this week.

Instead, crucial goals by Aiden Morelli and Isaiah Thongphet lifted Minot from its near season-ending predicament at the West Region Tournament.

“I knew we had it,” Morelli said. “After we tied it up, we got a lot of confidence back. So, once it went into overtime, I think we knew that we were going to win that game.”

The top-seeded Magi (18-6-0) managed to escape with a 3-2 overtime win over Mandan in a state qualifier contest.

Surviving such a close call so the program could return to the state tournament for a ninth time in the last 10 years was an eye-opening and humbling experience.

The Magi, who won eight out of their last nine games entering the West Region Tournament, weren’t invincible.

“We have seen a refocus these last couple of days at practice,” MHS co-head coach John Grubb said. “We have been talking about earning it all year, and they had to earn it. I think we are battle-prepared for this weekend.”

The Magi locker room inside Maysa Arena was still a bustling place on Tuesday afternoon, as players and coaches prepared for what lies ahead. The past is now irrelevant.

Three wins over the next three days at Scheels Arena in Fargo would bring home Minot’s first state championship since the unforgettable 2014-15 campaign.

When Minot won the state title in 2015, the Magi entered the state tournament as the West Region No. 3 seed. They will have the same seed marking before their school name this time around.

Good omen or merely a coincidence, Minot’s goal of winning another state title hasn’t wavered after the regional tournament scare.

“One of our goals was to win the West Region regular-season title, and we did that,” MHS co-head coach Jason Bennett said. “We swept Bismarck High and Bismarck Century in the regular season, and that’s something that hasn’t been done in a number of years. We are still fairly young. Our seniors have been great leaders, and we are excited for state. We are excited moving forward. The program is in a good position.”

Morelli, a middle schooler at the time, was in attendance at Scheels Arena that evening, cheering on the Magi’s comeback from the stands.

“It was pretty awesome to see them win that game,” he said. “Then, to watch them win (the state title) on TV the next day was pretty cool too… Seeing them win in 2015 makes you want to do it yourself.”

Luck, Murphy and defenseman Riley Opperude each have a team-high 15 assists on the season.

Between the pipes, MHS junior goaltender Tre Sortland has been a part of six shutouts this season while bolstering a 2.52 goals against average and an 89.2 save percentage.

Sortland, Luck and Opperude were named to the West Region All-Conference Team.

“We’ve had pretty good practices this week, so I think we are ready to go,” Luck said. “We have been preparing and thinking about this game all week. The first priority is this Fargo South game.”

The Bruins have outscored their opponents 102-30 this season.

Goaltender Zach Sandy has posted four shutouts in the Bruins’ last eight games. His 1.17 goals against average and 95.1 save percentage is the best in the state for goalies who have played in more than five games.

“They probably have the best goalie in the state,” Bennett said. “But we have a darn good goalie ourselves and have three lines that can put the puck in the back of the net. We just have to play our game. Hopefully, we can get to three. Three goals, that’s kind of what we like to score. We are hoping that’s enough. But, if we have to get to five, we will try to do that.”

Puck drop at the Scheels Arena will be approximately 2:30 p.m. this evening. The winner advances to state semifinals on Friday to face either Bismarck Century or Fargo Davies.

“Anything can happen in playoff hockey,” Morelli said. “It’s like the regular season doesn’t even matter.”

Our age of superstition