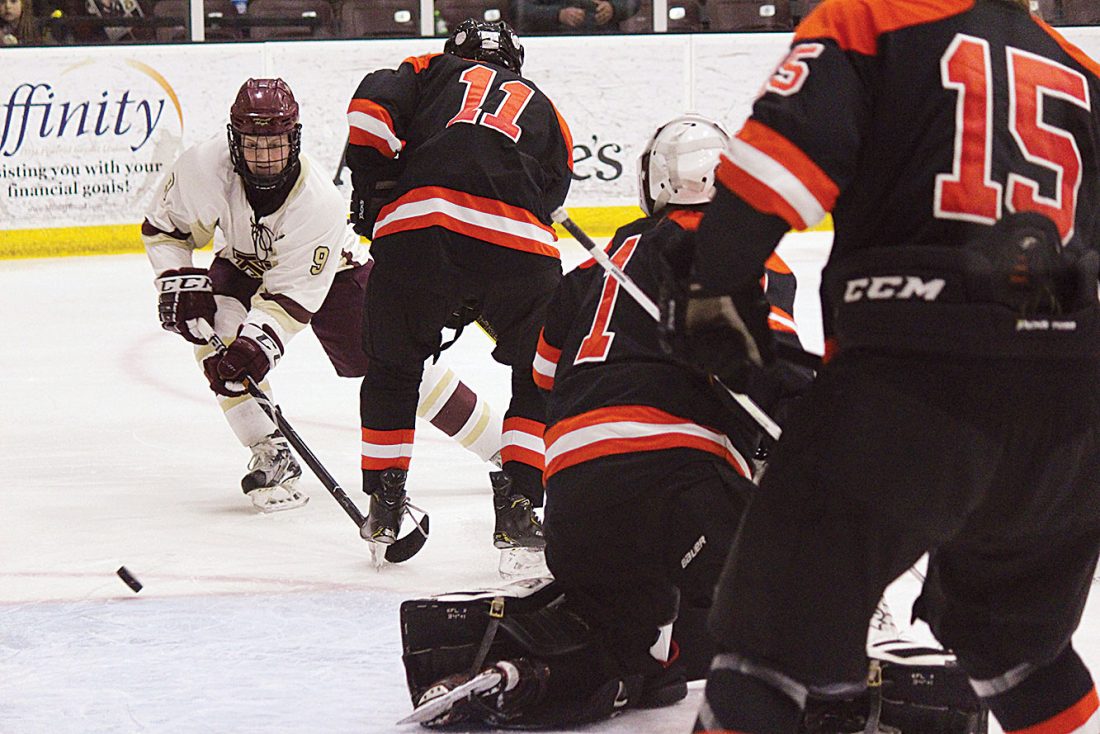 With the No. 1 seed in the West Region Tournament already locked up, the Minot High School boys hockey team was only playing for pride Tuesday on senior night.

That’s all the Magicians needed.

“It’s nice to win the (WDA) outright,” MHS co-head coach Jason Bennett said. “Williston is a team we could see down the road, so you obviously don’t want to lose to a team and give them confidence next week at regionals.”

Two seniors linked up for Minot’s first goal five minutes into the game.

After MHS junior goaltender Tre Sortland made a breakaway save with his blocker, the Magi went on a quick counter-attack.

Senior Payton Philion skated past Williston’s backline and slipped the puck over to fellow senior Jack Plemel for an easy tap-in goal into a wide-open net.

A rather clean first period with only one penalty called was not a sign for what was coming.

Frequent visits to the penalty box for both teams in the second period caused drastic momentum shifts.

“Both teams were physical and tried to gain that edge physically,” Bennett said. “It was a tight-checking game, and calls were made.”

In total, 21 penalty minutes were issued in the 17-minute period. That produced four power-play goals.

The Coyotes took advantage first with two goals coming off a 5-minute major penalty given to Minot skater Jayden Luck for boarding.

“There wasn’t much flow in the second period,” Bennett said. “Momentum swung both ways. They got penalties, we got penalties. You always like to see 5-on-5 hockey, but that’s part of the game. We each committed fouls we shouldn’t have, and each team took advantage of it.”

Minot and Williston then traded goals, separated by 15 seconds, with roughly seven minutes left in the period. Finding the back of the net was Minot’s Zachary Diehl and Williston’s Anthony Hickel.

A rebound goal buried by senior Nicholas Murphy with 5:03 left in the middle frame tied the score at 3-3.

With 3.4 seconds remaining, Aiden Morelli fired in a power-play tally directly off a faceoff. Minot had regained the lead, 4-3, going into the second intermission.

“All three of the (senior) forwards scored tonight, and Josh Drady also had a pretty good game as well,” Bennett said. “It’s good to see them contribute on senior night. It makes it extra special, and winning as a team is special too.”

Minot High closes out the regular season at home on Thursday with a nonconference game against Watford City. Puck drop scheduled for 5 p.m.