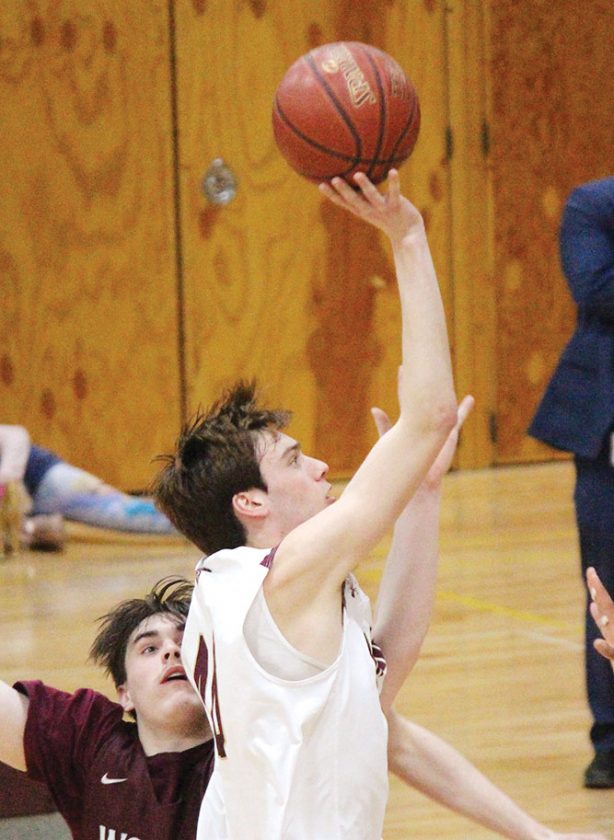 With the regular season winding down, no win is a sure thing. Teams aren’t going to roll over without putting up a fight.

“You hope you don’t,” MHS head coach Dean Winczewski said about the possibility of overlooking an opponent. “We played really well down there (in Watford City), and we were able to build off a lot of good stuff. I don’t think our defensive intensity was good for the most part. But, the second half, our kids came out and made plays.”

MHS senior guard Jaxon Gunville saw his first 3-pointer attempt rattled in and out to start the game. Unfazed, he sunk his next two with ease.

Watford City 5-foot-3 guard Britton Cranston showed off his range with a straightaway 3-pointer made a couple of feet in front of the Magicians’ center court logo.

Minot tried to keep pulling away, but Watford City continued to find gaps in the Magi’s defense to exploit.

“Our concern most of the time is if we are going to guard,” Winczewski said. “When we are good, we guard. When we struggle, we don’t. Our mentality is defending and rebounding, at least placing a value or importance on it. When we do that, we are pretty good. The problem is, we don’t do it all the time.”

Minot continued to hit from distance at a high percentage and eventually got its posts going with Easton Larson and Caden Johnson. Minot made 12 3-pointers in the contest.

“We started out a little slow, and didn’t have the best defense,” Larson said. “We started to tighten up at the end and were hitting the glass. We are a pretty good team when we play solid defense.”

“I thought we were really unselfish and balanced,” Winczewski said. “Our posts got the ball early and often, which was a tremendous start for us. Easton (Larson) and Caden (Johnson) are capable of scoring and doing good things. They did a good job on the glass as well because we attacked. It’s hard to get people boxed out when you are attacking. Big steps forward for us, I thought.”

Gunville, who is averaging 25.6 points per game, moved into 10th place all-time for the most points scored in a single season at Minot High. He is currently on pace (486 points in 19 games) to surpass the all-time record set during the 1990-91 season by Bart Manson (604 points in 25 games).

Gunville’s five made 3-pointers on Thursday also placed him one triple shy of tying Peyton Lamoureux’s school record for most 3-pointers made in a single season (85).

That record could easily fall this evening, as the Magi have a quick turnaround with a road game in Dickinson at 8:30 p.m.

Minot will close out the regular season on Tuesday (Feb. 25) with a rivalry showdown against Bismarck Century. Tipoff set for 7:30 p.m. in the Magic City.