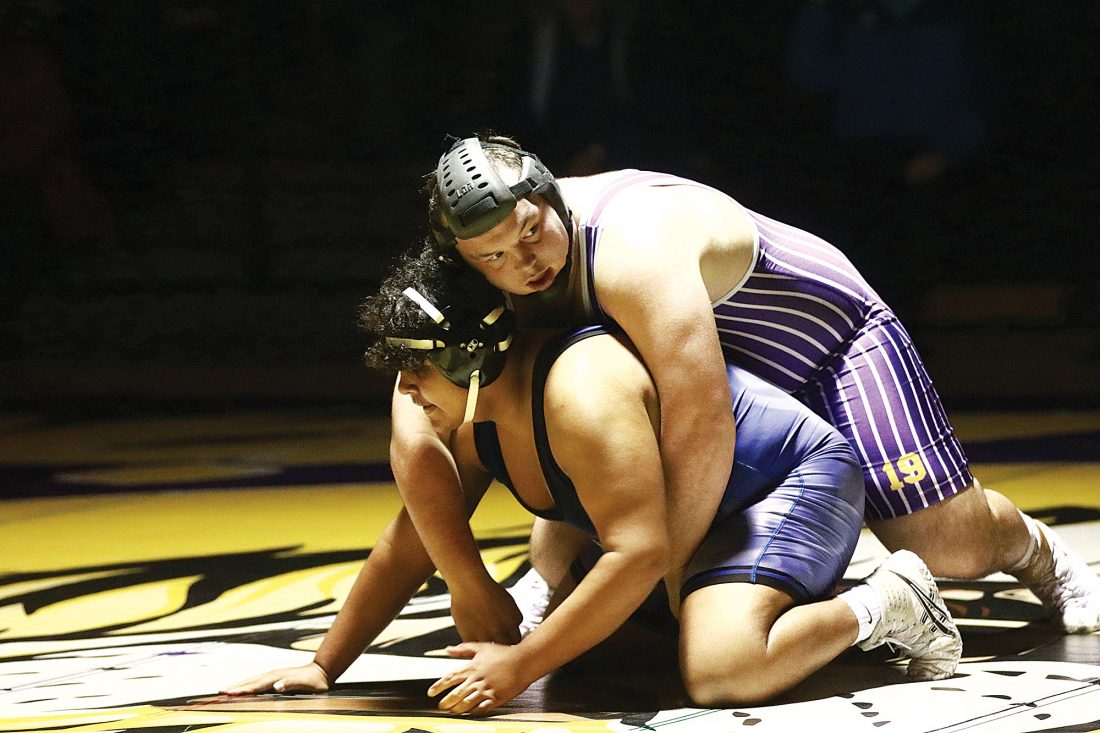 Jimmy Lafakis/MDN Bishop Ryan senior Keegan Henjum tangles with Williams County's Luis Borja during a match earlier this season. Henjum will wrestle as the No. 1 seed in the Class B's 285-pound weight class during this weekend's state tournament in Fargo.

FARGO — After showcasing their talents over the last three months, North Dakota’s premier high school wrestlers will test their mettle on the biggest stage.

The Class A and Class B wrestling state tournament begins today in Fargo. Here’s a glance at the local competitors:

The Minot High School wrestling team enters the Class A dual tournament as the West Region’s No. 2 seed. The Magicians will square off against a talented Fargo Davies team at 1:30 p.m. this afternoon.

The Magi will counter with an upperclassmen-led group. After finishing sixth individually and third as a team last year, Minot has something to prove.

“We’re built throughout,” Minot head coach Justin Racine said. “We’re going to need a full team production to get our goals that we set at the beginning of the year. We want to be a top-two team in the state. That’s our goal at the duals and in the individual (tournament).”

A pair of Minot State wrestling commits also bring experience to the mat. Senior Jacob Carmichael enters today’s action as the No. 2 seed at 195, while senior Kelby Armstrong will wrestle as the No. 3 seed at 132.

As a junior, Armstrong earned the No. 1 seed at 113 last year and finished in second place. Then-junior Carmichael took home a second-place finish at 182 last season.

“We expect to be toward the top every single year,” Racine said. “That’s my expectation as a head coach, and that comes with being a Magi. I think they all understand that. Hopefully, they live up to it.”

“The last couple of years, Bishop Ryan has kind of had our number going into the (regional) tournament,” Velva head coach Chad Barstad said. “Being able to walk away with a championship, I think we’re all pretty happy with that.”

The Aggies earned the No. 3 seed in the Dual Tournament and will meet Hettinger-Scranton at 11 a.m. this morning.

All of Velva’s wrestlers are seeded individually No. 7 or better.

“I think we’re peaking at the right time,” Barstad said. “We were able to get some of our lower weights to where they need to be at this point in the season.”

Sophomore Colin Dean will wrestle at 106 and has locked up Velva’s best individual seed. Dean did not participate in last year’s state tournament, but will enter this year’s event as the No. 2 seed.

Another junior, Gunnar Mogen, enters the fray as the No. 5 seed at 126. Mogen earned a second-place finish at 113 last year.

Ryan enters the state tournament in an intriguing position. The Lions are unseeded and will face No. 1 Lisbon at 11 a.m. in the team dual portion.

After finishing third at the Class B Individual Tournament, two Ryan seniors enter today’s action as No. 1 seeds. St. Cloud State commit Corbin Okeson will wrestle at 182, while senior Keegan Henjum comes in at 285.

Okeson finished second at 182 last year and Henjum placed sixth at 285. None of Ryan’s six remaining wrestlers are seeded.

“We have a proud wrestling tradition here,” Ryan head coach Brock Nagel said. “The guys are quite proud to continue it on. We think we have a realistic shot of placing in the dual portion of the tournament. Our season goal to start off was to be in the top four. We’ll see what happens, but we like our chances.”

Nagel was encouraged by the Lions’ recent efforts.

“All year, they’ve had the attitude where they will get after it,” he said. “They will be aggressive every single match. I was a little worried. Sometimes in the postseason, guys get tight and get scared to lose. Our guys didn’t show that. They stayed aggressive and wrestled the style that they know, so that was nice to see.”

Des Lacs-Burlington will not compete in the dual tournament, but the Lakers bring one of the state’s top wrestlers to the Fargodome. After defeating Havey/Wells County’s Bailey Lawson in a 7-3 decision at 185 last season, DLB senior Coy Spooner captured his first state championship.

Four other Lakers join undefeated Spooner (40-0) in the individual portion. Three of those wrestlers are seeded.

“We’ve had our challenges,” DLB head coach Kellan Zietz said. “The guys who have been dedicated are in a great position heading into state. Regionals was an important stepping stone for our five young men who qualified. All five have bigger goals moving forward to the state tournament. We just need to take it one match at a time and trust the work we’ve put in to this point.”