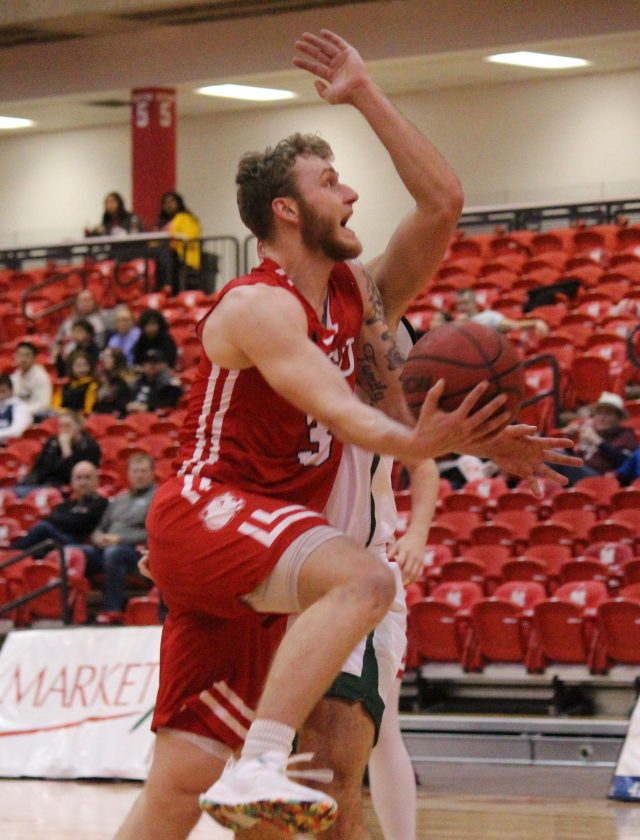 The senior night heroics, however, weren’t enough to prevent Bemidji State from edging away in the final minutes for a 73-65 road win.

“We battled hard,” Beisch said. “But it came down to them making a couple more plays than us.”

With under a minute and a half remaining, MSU pulled within a point at 64-63 after Rothstein sunk a 3-pointer from right in front of his bench.

From that point on, and much to the dismay of the MSU supporters, Bemidji State’s final nine points came from the free-throw line.

Questioning the officiating down the stretch was obligatory.

After being in the moment and displaying fiery emotions on the sideline during the game, a more subdued MSU head coach Matt Murken expressed his thoughts on the matter after the game.

“It’s tough to say, but I thought those guys did a good job,” Murken said about the officials. “I thought there were some plays where there was some contact that we didn’t get. But, it’s so tough to see what happens out there. You would just like to see if one team is going to shoot free throws on contact, you’d like to see the other team shoot it (as well).”

Any and all frustrations aside, MSU was unable to hit timely shots when needed. Meanwhile, Bemidji State did.

“Give them credit for hitting some uncontested shots late in the shot clock,” Murken said. “In a game that is so close, the battle for possessions is the offensive rebounds and turnovers. Those are key, and they beat us in both of those categories. They had one more rebound and we had two more turnovers, so they got three more shots at the basket.”

Beisch had 19 first-half points on his way to tying his career-best of 30. He shot 9-for-22 and only made two 3-pointers. A bittersweet display in his final game in Minot.

“Every day coming to practice to be with the team and the coaches,” Beisch said was his favorite memory inside the MSU Dome. “Minot State helped me a lot since I’ve been here. I love all the coaches and my teammates, for sure.”

Kody Dwyer was a rebound shy of a double-double with 10 points. Max Cody had an off night, shooting 3-for-10 to net 9 points.

“We really battled,” Murken said. “But, (Bemidji) made enough of those plays to be able to pull it out.”

Minot State closes out the regular season next weekend on the road at Minnesota State Moorhead (Feb. 21) and Northern State (Feb. 22).