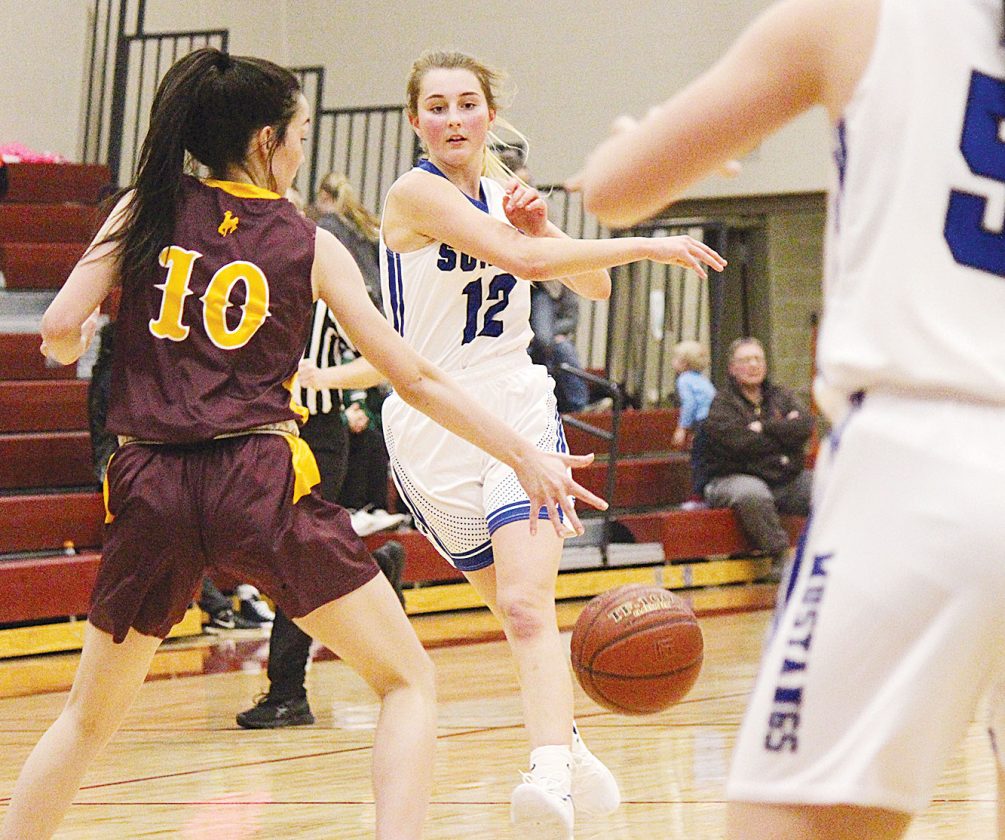 Alex Eisen/MDN Surrey junior guard Katie Aberle (12) makes a bounce pass up the court Monday evening against Powers Lake in the first round of the Nedrose Invitational girls basketball tournament.

The opening game of the week-long Nedrose Invitational girls basketball tournament pitted a pair of 1-1 teams against each other — the Surrey Mustangs and Powers Lake Ranchers.

Only one Class B squad could advance to the winner’s side of the bracket and bolster a winning record in the process.

Surrey fended off a late surge from Powers Lake for a 44-40 neutral site victory Monday evening in Nedrose.

“It was a game of runs for sure,” Surrey head coach Ron Aberle said. “We started off well, and our press worked well in spots. But, we just had too many turnovers. We have to cut down on our turnovers.”

After holding a slim 9-8 lead after the first quarter, Surrey (2-1) turned to its full-court press to ratchet up the pressure. More turnovers followed.

Mustangs’ 5-foot-11 junior guard Katie Aberle also started to heat up. She was making her presence felt down low in the post, in transition and hit a long two-point jumper to close out the half.

Surrey led 23-17 at the break with a short-handed roster of only eight girls.

“We were a little out of sorts tonight because some of our team is up in Glenburn playing a JV tournament,” Ron Aberle said. “And one of our starters was sick. So, we had some girls out there who haven’t played together very much.”

Katie Aberle started the second half with another made jumper, and a 3-pointer made later by her freshman teammate DeAnna Heinze pushed the Mustangs’ lead out to 11 points at 30-19.

The Ranchers (1-2) wouldn’t go away and started to chip away.

Freshman Savanna Fredrickson drained a 3-pointer and added a free throw before the end of the third quarter to get the deficit down to three, 32-29.

“We were a little slow and sluggish,” Ron Aberle said. “There were definitely some girls who weren’t here tonight that I could have used. But, for the rest of the tournament, we will have everybody here. I’ll have a little more bench to work with.”

Powers Lake briefly took the lead at 34-32 following a 3-pointer made by Camryn Rystedt, and then again at 37-36 off another triple by Fredrickson coming from the corner.

Following a fastbreak layup by Heinze, the Surrey’s full-court press worked its magic not once, but twice. Both Katie Aberle and Heinze forced back-to-back steals that turned into quick layups.

In a hurry, Surrey found itself leading again at 42-37.

Fredrickson, who finished with a team-high 22 points, made her third 3-pointer with 2:05 remaining to get the Ranchers within a basket.

The Mustangs, however, got the last bucket of the game on a contested layup converted by Heinze, who finished with 13 points.

Katie Aberle and Heinze combined for 36 of Surrey’s 44 points.

“We had a good spurt in the fourth quarter where we got some energy,” Ron Aberle said. “Basically, it was our full-court press that won this for us.”

Surrey advances to the semifinals of the Nedrose Invitational against the Minot High junior varsity team at 6 p.m. on Friday. Powers Lake drops to the consolation side of the bracket and will get Rolette/Wolford at 3 p.m. on Friday.

Two more first-round games will be played this evening in Nedrose. Our Redeemer’s faces Lewis & Clark-North Shore Plaza at 6 p.m., and Lewis & Clark-Berthold takes on hosts Nedrose at 7:30 p.m.