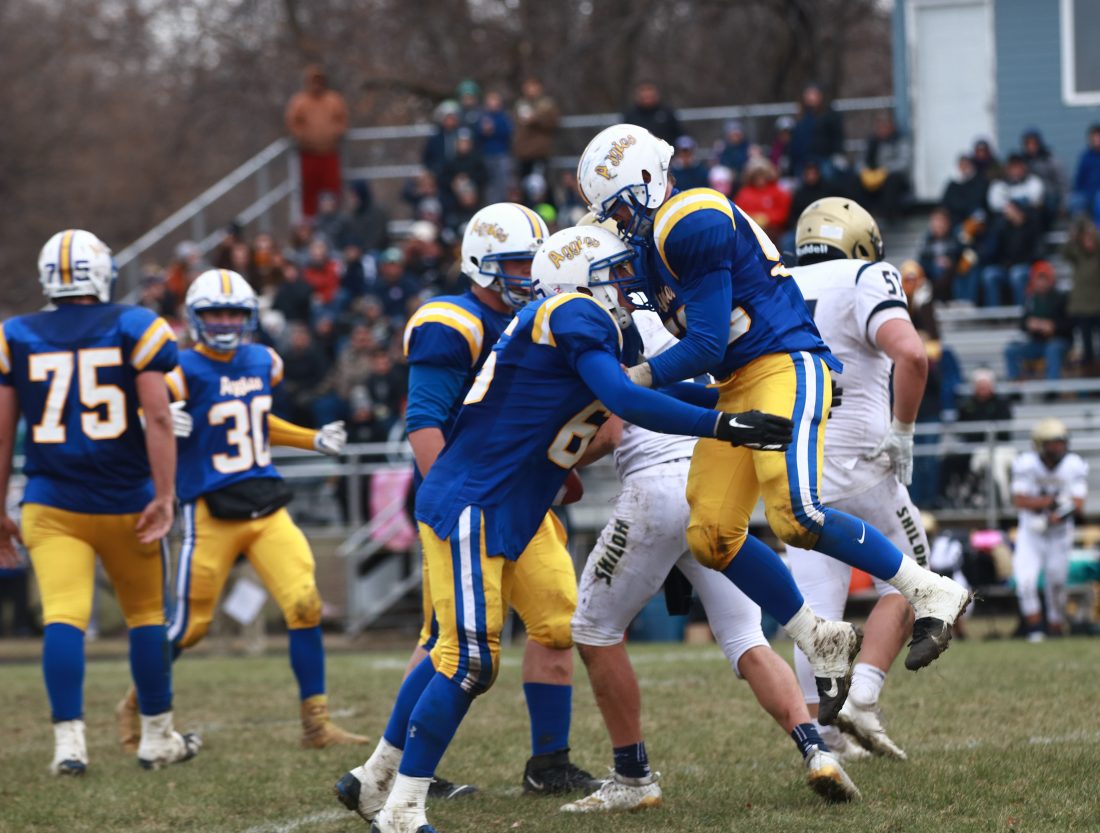 VELVA — On a day where Region 3 No. 1 Velva’s typically electric offense did not match its usual output, the Aggies’ defense held firm.

Velva (10-0) outlasted Region 4 No. 2 Shiloh Christian (9-2) in Saturday’s brisk fall weather, earning a 14-6 victory in the quarterfinals of Class A football playoffs.

Although Velva’s offense wasn’t firing on all cylinders, key plays from a trio of juniors — Jersey Selzler, Gage Florence and Adam Schepp — answered the bell.

“We’ve battled all year long,” Velva head coach Larry Sandy said. “(Shiloh Christian) is a big, aggressive team, an athletic team. They were able to take away parts of our game. We had to scramble and try to find some things that we could do.”

Neither team scratched in the first frame. In the second quarter, Selzler found Schepp for a 15-yard touchdown reception on a critical fourth down.

Junior defensive lineman Jerry Jespersen sacked Shiloh Christian senior quarterback Jaden Mitzel for a second-quarter safety. The Aggies took a slim 8-0 lead into the half, but those points proved to be more than enough.

“We survived at this time of year,” Sandy said. “Ultimately, that is what it’s all about. Surviving for another week. That’s what we did.”

Not willing to settle for the slim lead, Selzler and Florence linked up for a 92-yard touchdown pass with 6:30 remaining in the third quarter. Florence cut upfield and juked several Skyhawks before bursting ahead of the secondary.

“I was supposed to swing out of the backfield,” Florence said. “I was kind of a checkdown route. We got a linebacker in the middle between me and (Selzler), and he chose Jersey. Jersey flipped it out to me, and I guess I did the rest.”

The Skyhawks would not go down without a fight, however. A methodical third-quarter drive led to Mitzel finding paydirt on a one-yard sneak. The ensuing two-point conversion failed, but Shiloh Christian had points on the board.

Both defenses made plays in the fourth quarter, but Selzler iced the game with a late interception in the secondary. His athletic grab ended all hopes of a comeback during the two-minute drill.

The Aggies knelt out the clock and celebrated in a postgame huddle.

“We’re a tough family,” Selzler said. “We like to stick together in these tough situations. We know that we’re family, even though we’re yelling at each other. We were getting on each other, but we know it’s nothing personal. We all want the same thing in the end. A championship.”

While the Skyhawks stayed close all afternoon, they failed to find offensive consistency.

“We’ve been in a lot of tough games,” Shiloh Christian head coach Funnon Barker said. “Our kids have really stood tall. They’ve made a lot of adjustments and finished four quarters, but (Velva) is a good football team. They’re one of the best programs in the state in Class A.”

Velva will host Region 3 No. 2 Bishop Ryan (10-1) at 1 p.m. on Nov. 9. The semifinal contest will mark the teams’ second meeting of the season, as the Aggies defeated the Lions 32-24 back on Sept. 20. The winner this time around will get to play for a state championship.