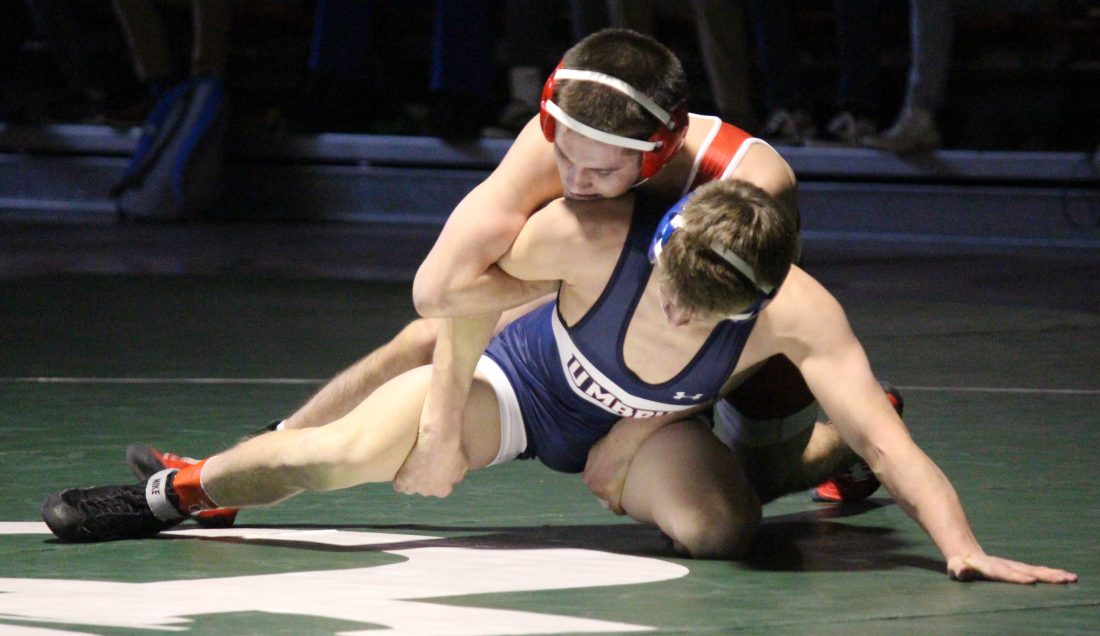 Wrestling his first varsity match as a starter for the Minot State Beavers, redshirt freshman Joseph “Joey” Lopez found himself in a deep 12-0 hole after the first period.

Things weren’t looking good, as U-Mary’s Austin Eichmann had nearly pinned Lopez twice. The Marauders were on the verge of taking their first lead Sunday evening in a non-conference rivalry tilt.

But sometimes all it takes is one quality shot to turn everything around. Lopez seized the moment halfway through the second period.

“I set him up and hit him with my move,” Lopez said. “I like to come heavy on his head and bring him to me. The moment I do that, a lot of times, I like to reach. That’s when I hooked his arm, threw my leg inside and brought his elbow to his hip. Pancake from there.”

After a lengthy struggle to avoid getting pinned, Eichmann eventually gave in.

The gutsy comeback from Lopez granted Minot State six points, which proved to be pivotal, as the Beavers (1-0) narrowly hung on to beat the Marauders (1-1) by three points, 19-16.

“We knew bonus points were going to be big,” MSU head coach Evan Forde said. “I told the team before the dual that this could very easily split five matches to five, and it did. So, the pin came in huge.”

The Beavers started strong in the lower weight classes with Dean Arevalo picking up a 15-9 decision at 125 and Oscar Nellis securing a major decision win, 11-2, at 133.

“I pushed the pace,” Nellis said. “I know I’m in really good shape, and as a team we go really hard. I knew I could gas that kid. I felt like as a team we gassed them.”

MSU sophomore Shadi Mitwalli used takedown after takedown to outlast Devin Steidler at 149 to give the Beavers a 10-3 lead.

The once raucous crowd inside the Minot State Dome was now hushed. It practically stayed that way as Lopez took to the mat and got man-handled early on at 174.

“Gave up a double takedown and some stupid points in the beginning,” Lopez said. “But, I knew he was going to gas out. We definitely worked harder than (U-Mary). The second period when we came out, I just felt his strength go away.”

Lopez regrouped and ignited the MSU supporters once again with his unexpected pin at 4:52 to erase a 12-0 deficit.

“This man right here, Joey Lopez, with a beautiful inside trip,” Nellis said. “The ball started rolling from there, and we caught the momentum.”

Next on the mat at 184 was MSU senior Keegan Berry, who limited U-Mary standout Phillip Springsteen to a single point.

“(Berry) has had some shoulder problems lately,” Forde said. “But he beat a returning All-American. That was a really big win.”

With two matches left, the Marauders found themselves down 19-10. They needed to find their own pin. It never came.

However, U-Mary did win the last two matches with a 4-0 and 4-3 decision to close the deficit down to 19-16. Not enough to overcome the pin by Lopez.

“It was just amazing,” he said. “The crowd was screaming. My adrenaline was flying. I’m hyped. My son is in the crowd, and he was dancing. I love it.”

MSU returns to the mat after Thanksgiving on Dec. 6 at home against Upper Iowa.