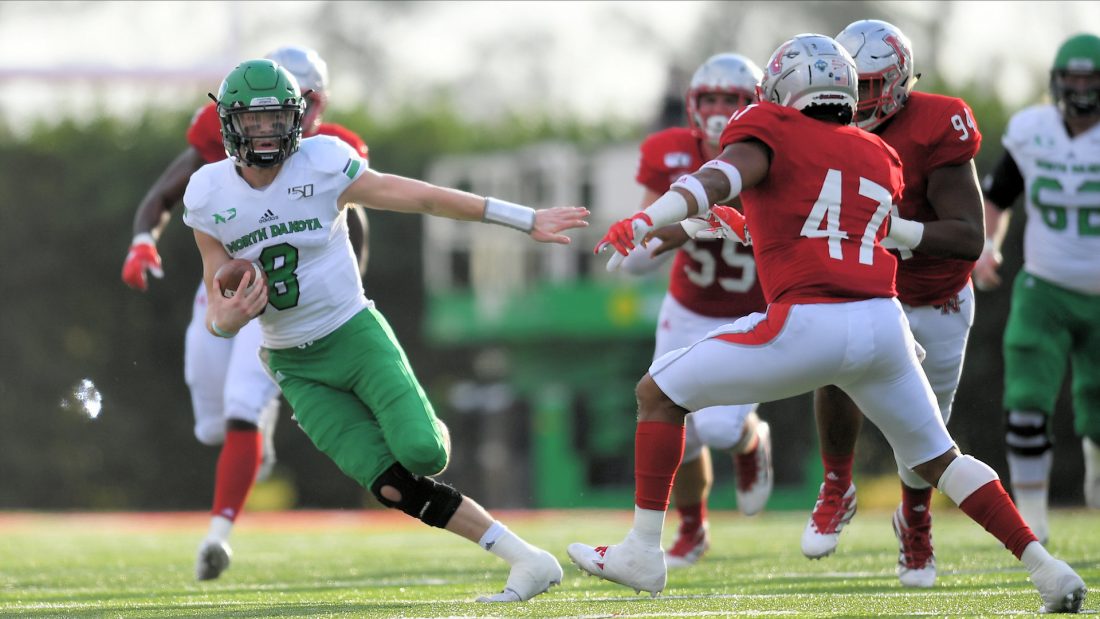 THIBODAUX, La. — When the University of North Dakota football team was at its worst this season, the Fighting Hawks struggled to stop the run and adapt to challenging road environments.

When the Hawks were at their best, UND was riding a new-look, first-year offense to thrilling efforts at the Alerus Center.

On Saturday, Nov. 30, the former was at the forefront in the bayou.

No. 19 Nicholls State racked up a 316-44 edge in rushing yards in decisively beating No. 24 UND 24-6 at John L. Guidry Stadium in the first round of the FCS playoffs.

“It doesn’t change how I feel about our football team. I think our guys work hard and do a lot of good things, but we just wanted a different result.”

UND, which dropped to 7-5 and 1-5 on the road this season, failed to win its first FCS playoff game in its second try. Nicholls State (9-4), winners of five straight, will now play at No. 1 North Dakota State in next weekend’s second round.

“I thought we were lining up okay, after the snap, we weren’t fitting like we’re used to,” UND defensive end Mason Bennett said. “We were fighting our butts off, but unfortunately, it just didn’t work out.”

It was the first time this season UND failed to score a touchdown. Senior quarterback Nate Ketteringham finished with 269 passing yards, with 121 of those going to Travis Toivonen.

Ketteringham, who had an interception and a fumble, finished as UND’s leading rusher, carrying seven times for 20 yards.

The key play for Nicholls came after UND cut the Colonels lead to 10-6 midway through the third quarter.

On Nicholls’ next drive, quarterback Chase Fourcade hit on his longest play of the day. Fourcade used play-action, then found Dixon for a 45-yard touchdown pass on a deep ball for a 17-6 lead with 4:22 remaining.

As Nicholls was attempting to ice the game midway through the fourth quarter, UND cornerback Evan Holm forced and recovered a fumble to give UND new life.

The Hawks, however, went three-and-out and Schweigert elected to punt from the UND 38 on third-and-6 rather than going for it on fourth down with 6:24 left in the game.

“It was a little too long of yardage and it was time to get a stop,” Schweigert said. “As I look back, we should’ve gone for it. It’s always easier to look back at the end.”

“You want to move on to as far as you can,” Bennett said. “The goal is to get in the tournament, then make a statement. Unfortunately, today wasn’t our day.”

UND’s previous low rushing total this year was 60 yards against Montana State. UND hasn’t ran for fewer than 44 yards since running for only four yards against North Dakota State in 2015.