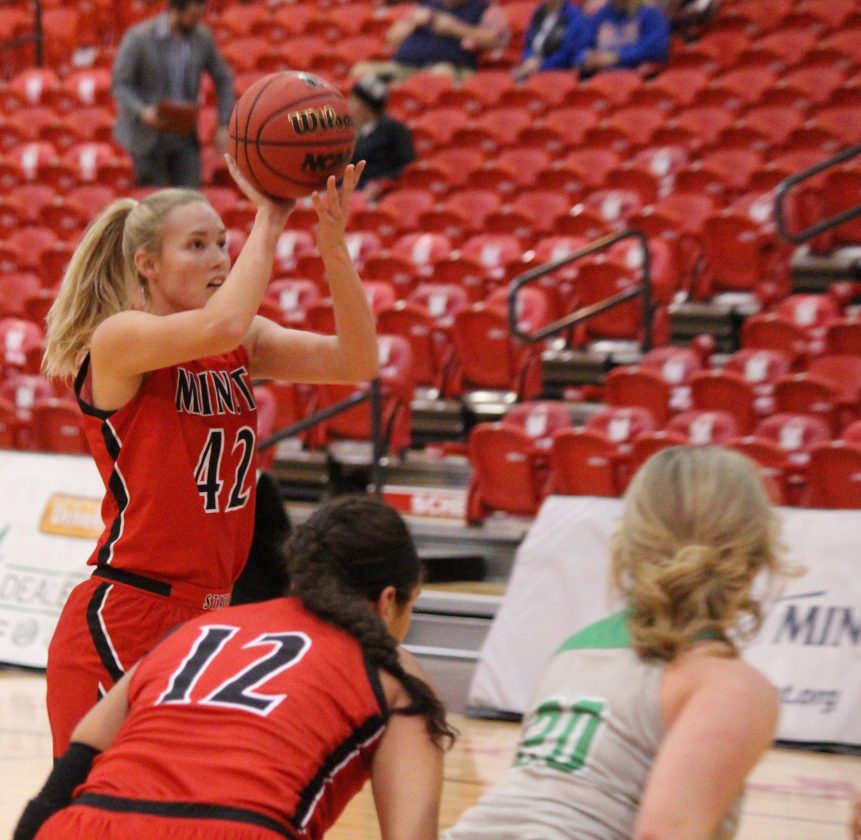 The Beavers (3-1) cruised to an 85-38 home victory against the winless Centurions (0-4) — competing with a small roster of only seven players.

MSU senior forward Reina Strand made the most of her extended minutes by posting her first collegiate double-double with 16 points and 10 rebounds. Both outputs were career-highs.

“I thought (Strand) was our best player on the floor today,” MSU head coach Mark Graupe said. “Usually, we can find one post that is on each night between Haley (Hildenbrand), Anna (Counts) and Reina (Strand). I’m just really happy for Reina because she is just a class person — the nicest person you will meet.”

Shooting woes plagued both teams early on, which allowed the Centurions to stick around for a little bit and even hold an 11-8 lead with a little under three minutes left in the first quarter.

“Not starting the usual starters and have a different team out there, so it took us a while to figure out how to mesh with each other,” Strand said. “By the third and fourth quarter, we had figured things out.”

The Beavers went on a mini-run to close out the opening frame with regular starter Calli Delsman providing seven points to give MSU a 19-14 lead.

MSU’s leading scorer Mariah Payne (16.5 points per game) sat the entire game out and cheered her teammates on from the bench.

“We didn’t play Mariah at all, ‘Why?,'” Graupe said rhetorically. “If she would have got hurt, I should be fired… So, we played the girls that usually don’t get a lot of minutes to get their feet wet.”

The Beavers’ defense held the Centurions scoreless for the first seven and a half minutes of the second quarter. The scoring drought was ended on a 3-pointer by Hanna Hayes, but MSU had pulled away to hold a 35-17 advantage.

Despite shooting 38.7% from the floor in the first half, MSU led by 16 points at halftime, 37-21. Also, unfortunately, Sanchez suffered a right ankle injury in the middle of the second quarter.

“I heard Raegan (Sanchez) say it’s just a sprain,” Graupe said. “We will have to play it by ear if she plays Tuesday, but we will definitely try to have her ready for U-Mary.”

The Beavers continued to pick apart the Centurions’ 2-3 and 2-2-1 zone in the second half, including an 11-0 run to start the third quarter.

“We just said we weren’t playing tight enough and doing a terrible job switching,” Graupe said. “We should be aggressive on our switches, and that’s something we talked about at halftime.”

Stand’s best sequence of the game came in the fourth quarter when she pulled down a couple of offensive rebounds before finishing off a three-point play.

“Opportunities like this don’t happen all the time,” Strand said. “I needed to go out there and play as hard as I could. That’s really all I had going in my mind. I just wanted to give my best.”

Strand was subbed out later in the fourth quarter for Minot High alumna Brenna Tschetter, who eventually scored her first collegiate points after missing her first seven shots across three games.

“Sometimes you just got to warm-up a little bit,” Tschetter joked. “But it was fun. My teammates are so supportive, and we are all about building each other up.”

Ceremoniously, the Beavers’ bench erupted when Tschetter converted a simple layup for her first career points.

“My teammates are the best part of the game,” Tschetter said. “We are so close. The pace is a lot more intense, obviously from high school and taking a year off made the transition a little harder. But, I’ve been adjusting and getting better every day in practice. I’m just really enjoying the friendships I’m making with my teammates.”

In six minutes of garbage time action, Tschetter picked up a pair of buckets, six rebounds, two assists and a block.

MSU freshman guard Breianna Smestad also had a strong showing with a career-best 14 points on 6-for-10 shooting and dished out four assists.

Mashaya Alden led Yellowstone Christian College with 14 points. The Centurions shot 11-for-50 (22%) from the field, with seven out of the 11 made baskets being 3-pointers.

MSU finished with a 49.3 shooting percentage, dominated the rebounding battle (53-17) and racked up 46 bench points.

The Beavers are home again Tuesday against Valley City State. Tipoff at 5:30 p.m. with the men’s team to follow at 7:30 p.m.