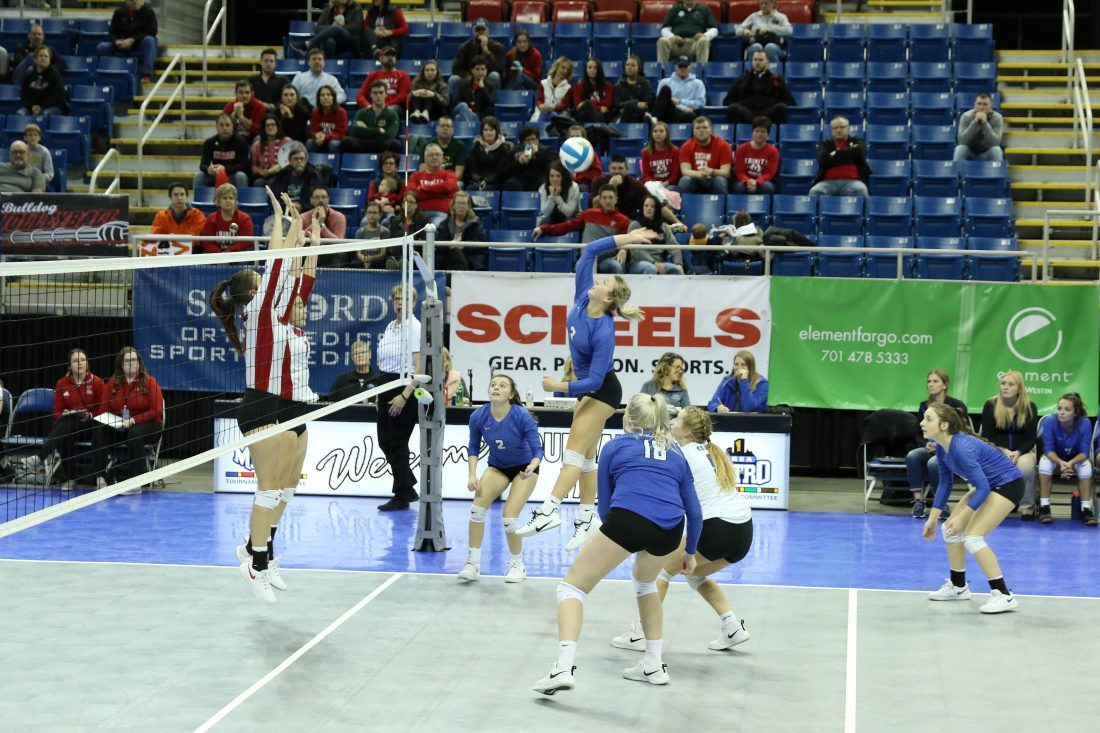 Al Christianson/Special to the MDN Stanley junior outside hitter Raygen Lee jumps up for the ball during Saturday's seventh-place match against Dickinson Trinity. The Titans defeated the Blue Jays by set scores of 26-24, 25-16, 25-18.

FARGO — At the beginning of the season, the Stanley volleyball players didn’t know if they could make it this far.

“They learned in small increments to trust each other,” Johnson said of the Blue Jays. “I don’t think they believed they were talented enough to win games for a lot of this season. Slowly, they started to believe they were good enough and started putting things together.”

Stanley caused trouble for the Titans, but the Trinity group found the necessary rebuttals. The first set featured a plethora of back-and-forth play, but the Titans closed it out with some critical points.

The contest featured a sublime duel at the net between Stanley senior middle hitter Jossi Meyer and Trinity junior outside hitter Abbey Kubas. Kubas posted 12 kills, while Meyer bested her foe with 14.

“I’m definitely going to miss playing with them,” Meyer said of her teammates. “This team is really special. We made it to state for our first time. We all worked really hard and went out there. It was super-fun.”

Trinity’s strong net play dictated the final two sets. The Blue Jays’ 56 digs served as a testament to their grit, but the Titans’ offense proved to be too much to handle.

After the match, Johnson reflected on Stanley’s progress.

“It’s amazing,” she said. “We told them going into today, ‘No matter what happens, we are putting another number on our wall in the gym. There’s 100 teams at home watching that would do anything to be playing in this match this morning.’ It is an honor to be here.”