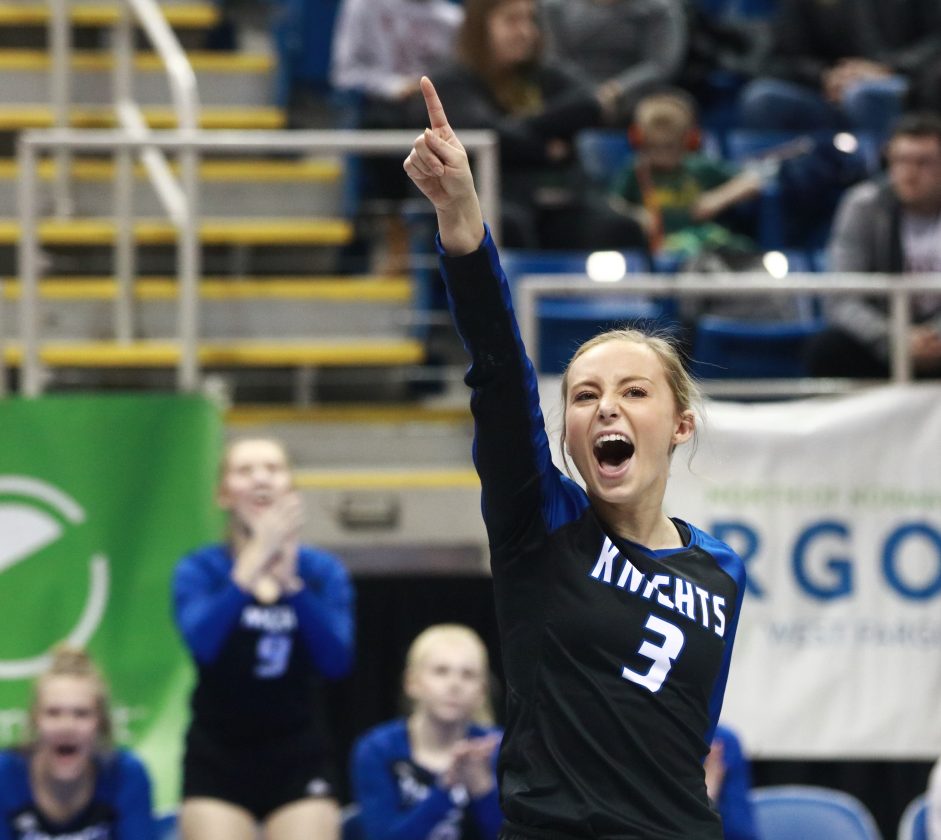 Jimmy Lafakis/MDN ORCS sophomore defensive specialist Kendal Braun gestures after scoring a point in the first set of Saturday's third-place match against Oak Grove. The Grovers defeated the Knights by set scores of 26-28, 23-25, 25-17, 25-15, 15-13.

FARGO — The Oak Grove Grovers wanted to give their hometown fans a show.

Playing just three miles away from their school, the No. 5-seeded Grovers (30-5-3) came all the way back for a five-set victory against No. 2-seeded Our Redeemer’s (40-5-2) during Saturday’s Class B state tournament third-place game at the Fargodome.

“Volleyball is a game of momentum and errors,” ORCS head coach Kara Nunziato said. “I think you saw that tonight. It was a roller-coaster ride from start to finish. The crowd was amazing and both fan sections were awesome.”

The Grovers pushed the Knights to the brink in each of the first two sets. Although ORCS used stout defense to fend off Oak Grove’s hitters, the Grovers’ defense persisted.

“We’re very evenly matched,” Nunziato said. “The whole environment was awesome. It’s a privilege to be one of the few schools who get to experience it.”

After the Grovers seized momentum in the third set, the hometown team found a different gear in the fourth frame. Their strong play pushed the Knights to their first five-set match of the season.

“They had a really scrappy defense,” ORCS senior libero Tea Boeckel said of the Grovers. “They had hitters who could go both across and (down) the line, so it was hard to defend.”

The foes traded blows in the final set. Neither squad gained a major advantage.

“I wanted to leave it all on the floor,” Folden said. “I feel like I did that.”

“I’m just really proud of this team,” Nunziato said. “They have completely upped the ante for next year’s team. The type of leadership and unity says a lot. We hope to carry that into next year’s season.”