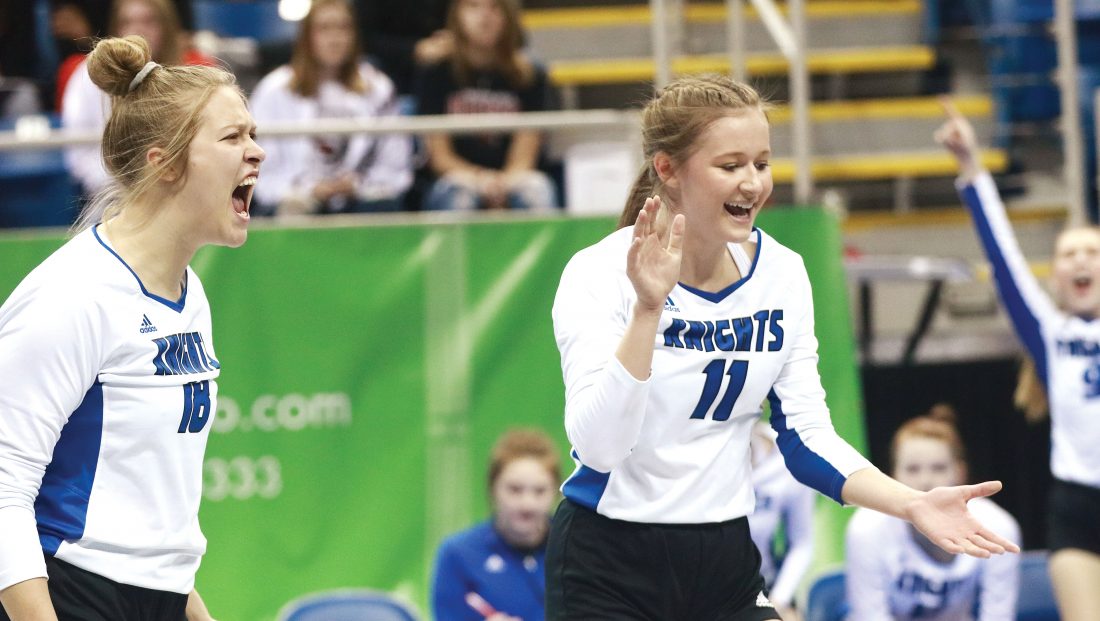 “We have some dynamic playmakers,” LAEM head coach Rich Olson said. “We’ve had some girls step up. We’ve got some young girls out there and we’ve got seniors out there. We’ve just come together as a team. Everyone has accepted their roles. We’ve just gotten better, and that’s what I am most proud of.”

With LAEM up 10-6 in the first set, the Knights called for a timeout. The Cardinals boosted their lead to 17-7 before closing out their first 25-14 set victory.

“I thought we really served tough and played pretty well in serve-receive,” Olson said. “Our Redeemer’s is a fantastic serving team. If we let them get on a roll like how they have throughout the season, it was going to be really tough on us. We really put an emphasis on doing well in serve-receive, and I thought our girls stepped up and did that tonight.”

Olson’s assessment about the Cardinals’ serving proved to be accurate — LAEM tallied six aces to the Knights’ one. The Knights battled early in the second set, but the Cardinals fended off any comeback hopes.

“Even though we lost at the wrong time, we have a lot to be proud of,” ORCS head coach Kara Nunziato said. “This team has grown tremendously. We have a lot of young players, and the seniors have done a lot to get those younger players ready for big moments that got us here.”

Senior setter Calyn Crockett wanted in on the Cardinals’ double-double brigade as well. Crockett tied Ronnigen with 16 digs and handed out a match-high 30 assists.

“I thought we did really well defensively and in serve-receive,” Nunziato said. “I think where we lost momentum was being able to translate that into consistent offensive runs. Tonight, Langdon played a phenomenal match.”

“They had a big block and big swings,” Boeckel said of the Cardinals. “It was hard to play defense. They were a really scrappy team. They’re really good.”

The Knights have been a top-four team at the state tournament in five out of the last six seasons.