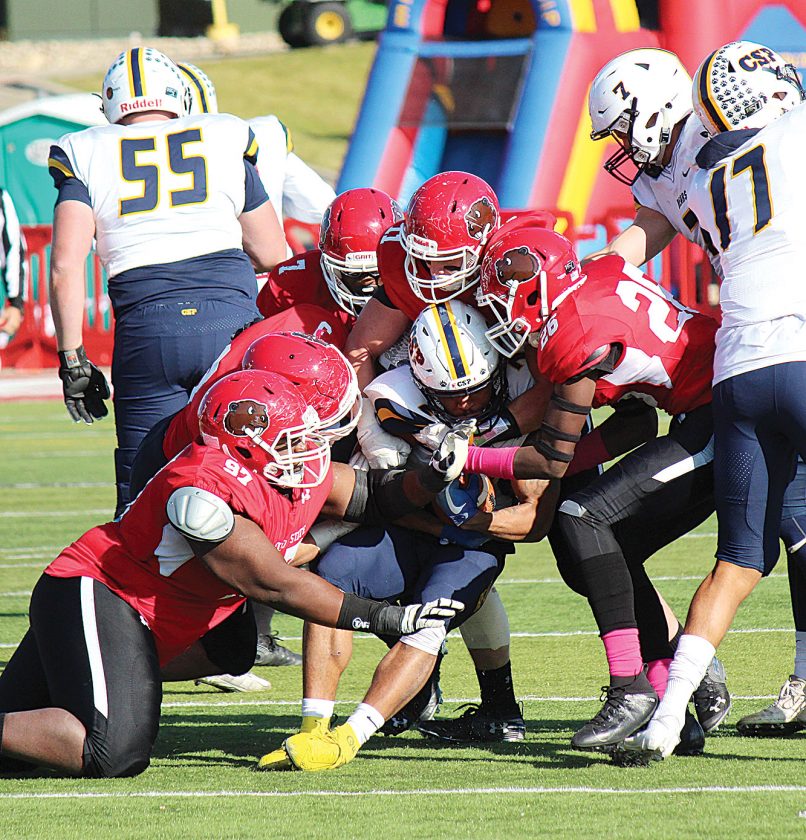 Alex Eisen/MDN Five Minot State defenders converge for a group tackle on a Concordia-St. Paul running back earlier this season at Herb Parker Stadium in Minot.

The recruiting trail for the Minnesota State Moorhead football team has made frequent stops in North Dakota over the years.

Plucking some of the best high school players in the state and moving them to Minnesota has been a priority for Moorhead head coach Steve Laqua and his coaching staff.

Laqua, a native of Cavalier, has roots in North Dakota as an ex-North Dakota State student-athlete and coach, plus being the former head coach of the Fargo Shanley High School program.

The Dragons bolster 38 players from North Dakota, including redshirts, on its roster. Nine of them are projected to crack the starting lineup across both sides of the ball this afternoon against Minot State.

For a bulk of these players, coming back to Minot represents a homecoming game of sorts. A chance for friends and family in the surrounding area to see them in action once again.

Vedaa is tied for third on the team with 49 total tackles. He also has two forced fumbles and a sack on the season.

Marquart is Moorhead’s second-leading receiver with 33 catches for 275 yards and two touchdowns.

“I think they have more skilled players than big players, so they have to throw the ball to have a little bit more success,” Minot State head coach Mike Aldrich said. “You can see when they are facing adversity, that’s what they will end up going to. I think the good thing for us is we match up a little bit better with speed than we do with big, power type teams.”

The Beavers (3-5) have their own local contingent, headlined by junior starting quarterback Ben Bolinske.

The former Minot High Magician and University of North Dakota transfer was held in check last week against Augustana — as were all the Beavers in a lopsided 51-6 defeat.

Bolinske has shown flashes of brilliance with a three-touchdown passing performance against U-Mary or rushing for three touchdowns against Concordia-St. Paul.

Another interesting side note, MSU is 3-0 when Bolinske doesn’t throw an interception and 0-5 when he does. The importance of ball security exemplified, or perhaps just a weird coincidence.

“Offensively, we really couldn’t get into a rhythm,” Aldrich said about last week’s defeat. “We weren’t able to do the things on offense that we needed to do to try and control a football game.”

A sturdy and dependable offense line has kept Bolinske upright, for the most part, this season.

The starting unit of Eric Besalda, Andrew Ruelas, Donovan Moore, Parker Franzen and Sebastian Gutierrez are quietly putting together an impressive season. They have only allowed five sacks (tied for seventh-best in Division II), and the team as a whole has only been called for 37 penalties (ninth-best in Division II).

This week the MSU offensive line will have to slow down Moorhead junior defensive tackle Jordan Magnuson, who recorded a career-high 14 tackles (six for loss) and three sacks in a 23-14 win over Southwest Minnesota State last week.

Also, not to be overlooked when observing the trenches is the resurgence of the running game, which was basically non-existent a season ago.

With three games left in the regular season, MSU has 1,279 rushing yards with freshman Ali Mohamed leading the way with 578. Last year, the Beavers rushed for 1,264 yards with converted wide receiver Lane Torgerson carrying for a team-high 524 yards.

“This year, we have finally established some other (offensive threats),” Aldrich said. “As far as offensive weapons, (Lavante Bushnell) is probably our biggest threat down the field.”

Lastly, two other Minot State notes for this afternoon: Bushnell needs one touchdown reception to break the Division II school record, and earning a fourth win this year would also mark the winningest season in Division II history for the program.

Kickoff in the second to last home game of the regular season at Herb Parker Stadium is set for 2 p.m.