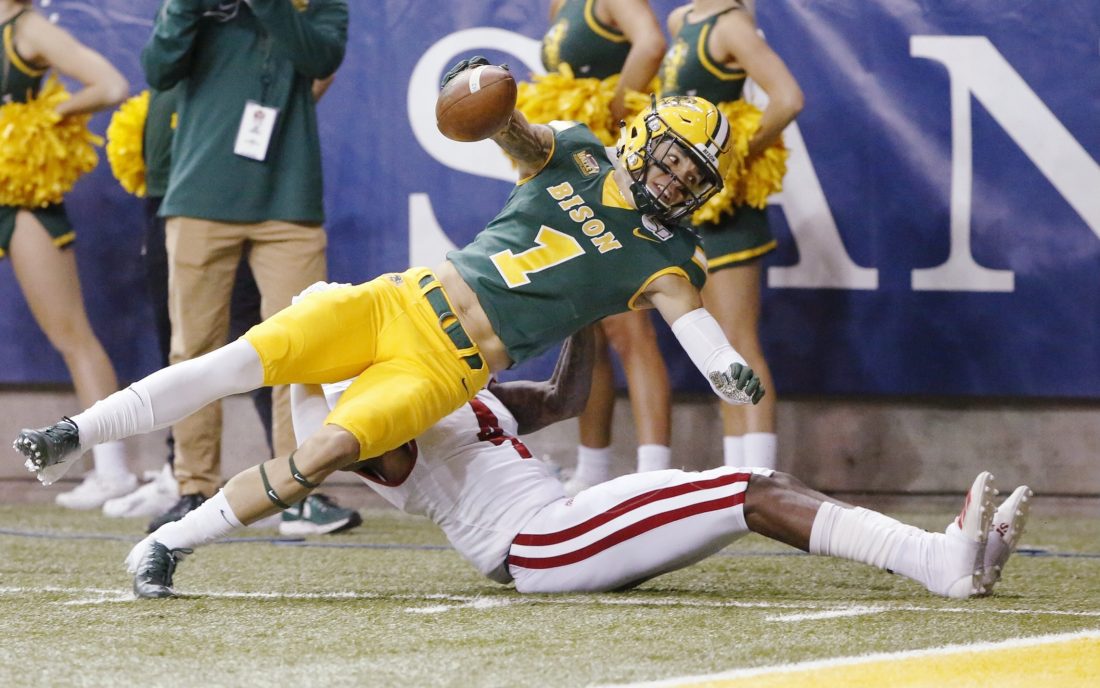 The No. 1-ranked Bison gained 700 yards of offense, including 400 in the first half, to fuel a 49-14 victory against the University of South Dakota before 17,844 fans on senior day at Gate City Bank Field at the Fargodome.

The Bison (11-0, 7-0 MVFC) extended their winning streak to 32 consecutive games and clinched their ninth consecutive MVFC championship. They won the league title outright and earned the automatic bid from the conference for the Division I FCS playoffs. NDSU closes out the regular season Saturday, Nov. 23, at Southern Illinois.

“It’s really cool,” said Bison senior safety James Hendricks. “We’ve had so many good players come through in the last nine years. To keep this tradition going is our No. 1 goal for the year.”

The Bison finished with 700 yards on 70 plays against the Coyotes, setting an NDSU record for yards in a game during the Division I era. It’s the third-most yards gained in a game in program history.

“They are a really good football team” South Dakota head coach Bob Nielson said. “We struggled all year defensively and obviously they took major advantage of that today.”

The Bison scored two touchdowns in the third quarter to build a 35-point lead. Freshman fullback Hunter Luepke scored on a 7-yard touchdown run that gave NDSU a 35-7 lead with 12 minutes, 13 seconds to play in the third. Senior running back Ty Brooks added a 4-yard scoring run to give the Bison a 42-7 lead with 6:58 to play in the quarter.

Brooks rushed for 104 yards and two touchdowns on 10 attempts to lead the Bison in rushing.

“I knew Ty was going to have a great game at breakfast today,” Bison head coach Matt Entz said of Brooks, one of the team’s 14 seniors. “He was on Cloud 9.”

Bison quarterback Trey Lance was lifted from the game after that scoring drive. The redshirt freshman completed 12 of 15 passes for 249 yards and two touchdowns in less than three quarters. Lance also rushed for 47 yards and five attempts.

The Bison erupted for 422 yards in the first half, scoring touchdowns on their first four possessions. The scoring drives covered 84, 58, 90 and 90 yards.

Bison sophomore wide receiver Christian Watson played a key role in the early success. His 41-yard reception set up a 2-yard Brooks touchdown run that gave NDSU a 7-0 lead with 9:22 to play in the first quarter.

“The whole goal today was to win a conference championship,” Brooks said.

The 6-foot-3, 196-pound Watson added a 24-yard run on his team’s third drive. That helped lead to a Ben Ellefson 32-yard touchdown catch from Lance that gave the Bison a 21-0 lead with 14:53 to play in the second quarter.

Watson capped his big opening half with a 43-yard touchdown catch that gave the Bison a 28-0 lead with 7:50 to play in the second quarter. Watson had three catches for 94 yards and a score and three rushes for 32 yards through the first two quarters.

Bison running back Adam Cofield had a 7-yard run that staked the Bison to a 14-0 lead with 4:33 to play in the first quarter. NDSU rushed for 179 yards on 23 attempts in the first half.

Lance had a big opening half, completing 11 of 13 passes for 243 yards and two touchdowns. The 6-foot-3, 221-pound Lance also rushed for 21 yards on four carries through two quarters.

Luepke capped the scoring for the Bison with a 3-yard touchdown catch from junior quarter Zeb Noland to build a 49-7 lead with 14:56 in the fourth quarter.

The Bison played without starting linebackers Jabril Cox and Aarron Mercadel. Entz said he expects both could return to the lineup next weekend. NDSU moved safeties Michael Tutsie and James Kaczor to outside linebacker to fill the void of those two injuries.

“They’d like to be known as the honey badgers from here on out,” Entz joked.

The Bison held South Dakota to a season-low 245 yards with their new-look defense. NDSU has a chance to complete an undefeated regular season with a win at Southern Illinois.

“We set out a goal to go undefeated this regular season and that’s right in front of us,” Hendricks said.