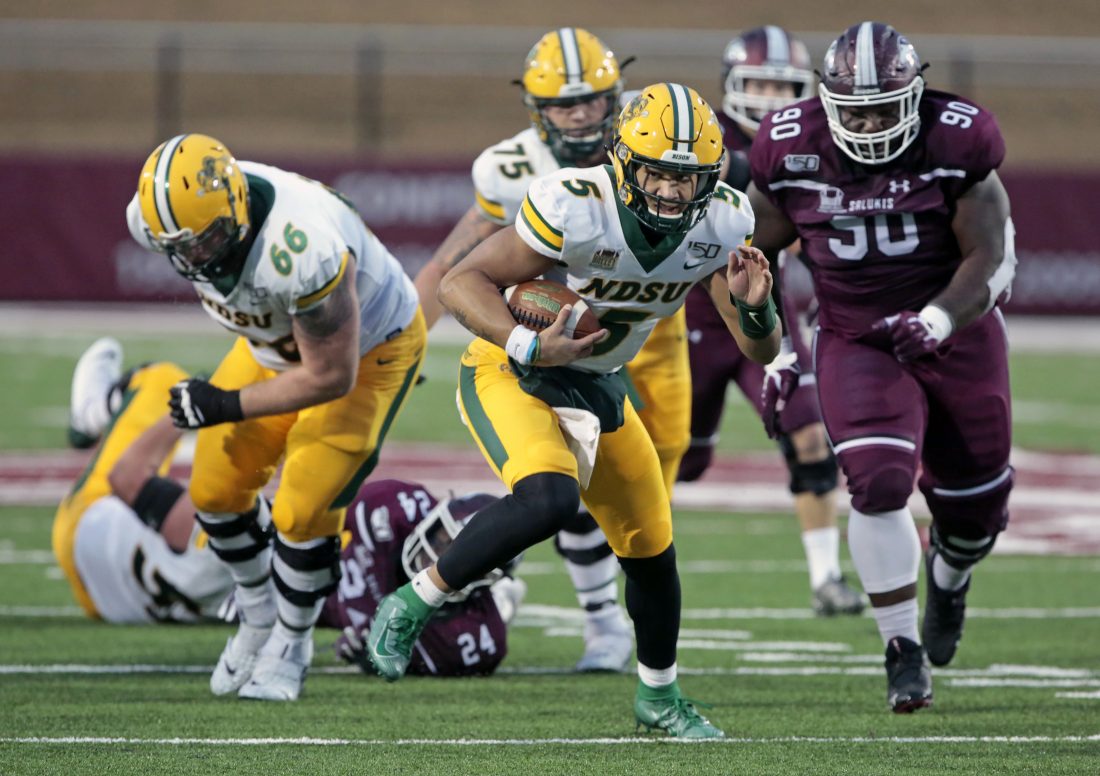 The Bison overcame a sluggish first half with a powerful final two quarters to defeat Southern Illinois 21-7 at Saluki Stadium before 5,423 fans on a cold, damp afternoon in Missouri Valley Football Conference play.

“I haven’t put a whole lot of thought into it. My No. 1 goal is 1-0 every week,” Bison head coach Matt Entz said. “Every team has setbacks here and there. Streaks don’t win national championships. Streaks don’t get kids to graduate. We’ve got good people in our program and we’re going to continue to coach them.”

Entz was a Bison assistant coach during the 2012-2014, including time as the defensive coordinator.

“I probably thought more about it the first go around because I was more concerned then about screwing it up as a coordinator,” Entz said.

The Bison are slated to earn a first-round bye in the FCS playoffs after completing a perfect regular season, a goal the players set before the season started. This marked the first time NDSU has gone 12-0 in a regular season.

“It’s pretty remarkable,” said Bison senior safety James Hendricks. “Being 12-0 is a goal that we set out for, but it’s something that you’ve got to take one week at a time. That’s why I’m so proud of these guys.”

Southern Illinois (7-5, 5-3 MVFC) had its five-game winning streak snapped. The Salukis will wait to see if they earned an at-large berth for the FCS playoffs.

“I’m proud of our football team, proud of our program,” Southern Illinois head coach Nick Hill said. “We just didn’t make those six or eight plays you need to make to beat a football team like North Dakota State when they play such a clean level of football.”

The Bison didn’t start to gain separation from the Salukis until after halftime.

NDSU scored touchdowns on sustained drives the first two times it had the ball in the second half. The Bison gained some breathing room on a 34-yard touchdown run by Trey Lance on third-and-7 early in the fourth quarter. That made it 21-7 with 11 minutes, 36 seconds remaining.

“We wanted to go out and finish this thing the right way,” said Lance, who completed 13 of 23 passes for 146 yards.

The Bison took an early lead, parlaying their opening possession into a touchdown. NDSU converted three times on third down to keep the drive alive. True freshman running back Kobe Johnson capped the march with a 44-yard scoring burst that gave the Bison a 7-0 lead with 9:59 to play in the first quarter.

Williams rushed for 117 yards and a score on 23 carries to lead the Southern Illinois offense. Senior running back D.J. Davis added 70 yards on 13 attempts. The 6-foot-1, 239-pound Williams had 66 yards at halftime.

“The biggest thing as a defense is we need to tackle better,” Hendricks said. “We hit every fit. We were in the right spots every single time, but that’s a credit to (Williams) and (Davis), those guys are really good football players.”

The Bison had a chance to score late in the second half. NDSU had the ball at the SIU 28-yard line with three seconds to play. Lance fired a pass that wide receiver Jimmy Kepouros caught near the sideline in the end zone, but Kepouros couldn’t get a foot down. The game remained tied at 7-7 heading into halftime.

The Bison had 211 yards on 34 plays in the first half, but couldn’t score any points before halftime after that game-opening drive.

That changed on NDSU’s first drive of the third quarter. Taking over at their own 26-yard line after SIU misfired on a 44-yard field goal attempt, Lance led the Bison on a 10-play drive that took over five minutes. An 11-yard pass on third-and-7 to wide receiver Christian Watson was the big play with running back Adam Cofield covering the final 8 yards with a run up the middle for the touchdown.

“I wasn’t going to panic,” Entz said. “I thought we were better than what we had played and it showed in the second half.”

The Bison are slated to next play Saturday, Dec. 7, in the second round of the FCS playoffs with a chance to make history.

“Thirty-three straight has not been talked about once this whole year,” Hendricks said. “We’ve just got to keep it going forward.”