MSU WBB forces many miscues in 70-57 win over VCSU 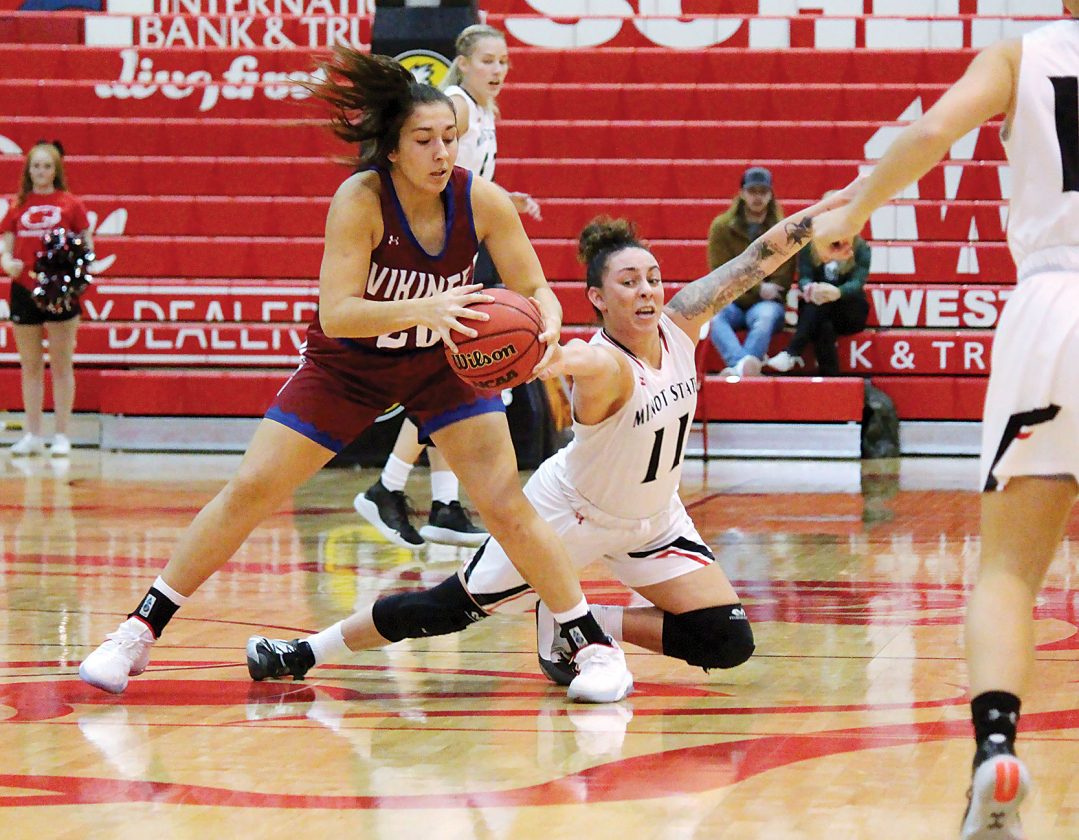 Putting the pressure on, the Minot State women’s basketball team forced Valley City State into 30 turnovers to win its final non-conference game of the season, 70-57, Tuesday evening inside the Minot State Dome.

The Beavers (3-1) had their own struggles but still managed to come away with their third consecutive victory.

“My assistant coach Ryan (Clark) said it best, ‘We play in spurts,'” MSU head coach Mark Graupe said. “We don’t play a total of 40 minutes. We will look fine and then have lapses of — I don’t know if it’s concentration or just not being focused.”

MSU’s high-pressing man-to-man defense forced a handful of miscues from the Vikings’ defense.

“I thought we caused their turnovers,” Graupe said. “But, if you look at our 12 (turnovers) in the first half, unforced. It wasn’t because of their pressure at all. They weren’t getting after us defensively.”

Despite a poor shooting performance, VCSU (2-4) only trailed by four points at the end of the first quarter and then 13 points by halftime, 33-20.

MSU committed 11 fouls in the first half with Anna Counts (3), Bethany Theodore (2) and Mariah Payne (2) each picking up multiple violations.

Theodore and Payne each picked up their third personal foul less than two minutes into the third quarter.

“Playing to the refs is an important thing,” Theodore said. “At times, we are getting consecutive fouls on the same things. We have to read the refs and understanding that. They are the ones controlling the fouls.”

Miscommunication and lack of awareness on an in-bounds play by the Beavers saw Graupe get the most animated on the sidelines.

“They were taking the ball out underneath and we had three white jerseys floating around the top of the key, and not even looking back,” Graupe said. “We thought they were shooting free throws or something. We are unfocused, not concentrating. And boom, they make a three-point play. You can’t have that.”

Breaking down VCSU’s 2-3 zone, Mariah Payne drained a couple of triples on her way to a game-high 20 points. Counts ended up fouling out with 10 points, seven rebounds and four blocks. Reina Strand chipped in with 10 points, as well.

Theodore also fouled out with 7 points.

Relentless MSU ball pressure throughout the evening was provided by Theodore, Danielle Rizzari and Raegan Sanchez.

“It doesn’t wear us out,” Sanchez said. “We have been conditioning for this, and I think we have enough guard play that we do really well when we pressure the ball.”

VCSU was led in scoring by Alexis Bentz with 15 points.

“We have to go back to practice and work on the fundamentals,” Sanchez said. “I think we will figure it out in practice.”

The Beavers open NSIC play on Saturday against rival U-Mary at the Minot State Dome. Tipoff at 3:30 p.m. with the men to follow.

“If we play like tonight, it’s not going to be fun Saturday,” Graupe said. “We need three straight great days of practice to get ready.”