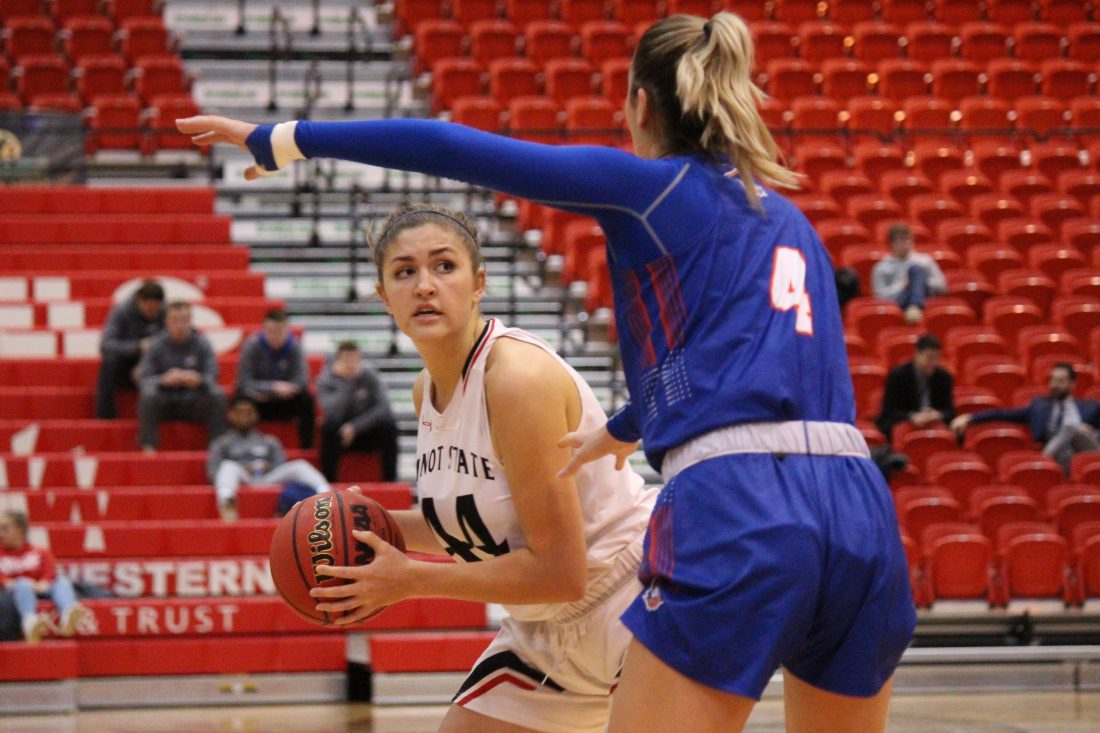 After holding the Marauders to a season-low 19 points in the first half, the Minot State women’s basketball team was in a prime position to beat the University of Mary for the first time since 2017.

Then came the third quarter.

The Marauders (7-3, 1-0 NSIC) finally got Minot native and defending NSIC Player of the Year, Cassie Askvig, going offensively and the Beavers (3-2, 0-1 NSIC) couldn’t keep up.

U-Mary won its fourth straight rivalry showdown over Minot State with a 66-50 road win Saturday inside the MSU Dome.

“There is a saying in basketball that your gameplan can only last so long,” MSU head coach Mark Graupe said. “They started scoring on us, and we weren’t scoring. We just get so deflated.”

Both teams started slow with the score knotted up at 4-4 entering the first media timeout.

The offensive rhythm was lacking at both ends with missed shots from close range and 21 combined turnovers in the first half. U-Mary only shot 30.4% from the floor in the first 20 minutes with Askvig being held to 2 points on 1-for-5 shooting.

“Defensively, we really scouted them,” MSU guard Mariah Payne said. “That showed in the first half. And, it showed in the second half that we came out and didn’t stick to what we were told to do.”

MSU led 25-19 at halftime. Graupe thought the cushion should have been more than half a dozen.

“We should have been up by double-digits,” he said. “Very disheartening to only be up six. We missed bunnies galore.”

The Marauders buried back-to-back 3-pointers by Lauren Rotunda and Macy Williams, and Askvig added a layup to give U-Mary a 27-25 lead less than two minutes into the third quarter.

Askvig went on to score 10 points in the quarter and ended up with a game-high 19 points and 10 rebounds.

The Beavers’ offense had also lost its creativity. The ball kept ending up in the hands of Payne. The senior guard, with limited options, had to keep forcing up shots. She finished 4-for-17 with a team-high 14 points.

“What I saw tonight, that I also see in practice, is when things don’t get right for us offensively, all we do is give it to Mariah (Payne) and count on her to create — do everything,” Graupe said. “Too many people hung their heads, and they just give it to Mariah and get out of the way. That puts too much pressure on Mariah.”

Payne added: “Our offense comes from our defense. If we are going to go out there and not stick to (the scouting report), then, yeah, that’s going to reflect in our offense.”

The Marauders used a 7-0 run to start the fourth quarter, which deflated any chance the Beavers had at making a comeback.

MSU trailed by double-digits for the entirety of the fourth quarter, and eventually fell 66-50.

“I just want to play well,” Graupe said. “When are we going to put a full 40 minutes together? We haven’t all year, and that’s kind of scary.”

Along with Payne, Haley Hildenbrand and Bethany Theodore also finished in double figures with 10 points each.

“Yeah, this one does sting more,” Payne said. “What stings the most is that in the first half, we played so well.”