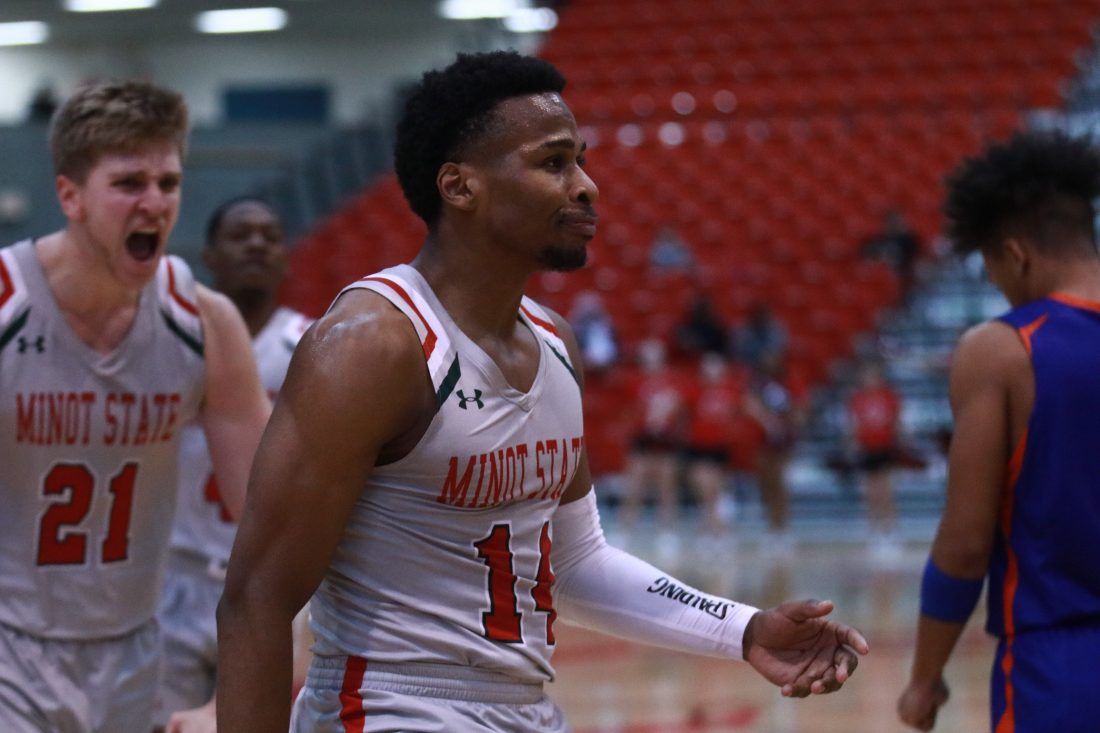 Jimmy Lafakis/MDN MSU junior guard Duane Goodman Jr. reacts after scoring a basket in the second half of Saturday night's game against U-Mary at the MSU Dome. The Marauders earned a 56-53 victory over the Beavers.

The University of Mary Marauders survived a rock fight.

The Beavers increased that margin to 24-18 before the intermission and hit their stride after a rough start to the second half. Back-to-back three-pointers from junior guard Max Cody and Beisch forced a U-Mary timeout with 12:06 to play.

Then, the Marauders found a jolt. U-Mary hit key shots down the stretch, and its defense stifled the Beavers.

“The biggest thing we’ve got to learn is when teams change up how they’re guarding things, we’ve got to execute well out of that,” MSU head coach Matt Murken said. “We’ve got to be able to execute well on the fly offensively, continue to keep the ball moving and work for great shots. They gave us a little bit of trouble, and it always seemed like we had one guy not quite back to the right spot out there offensively. It kind of stagnated the ball for us and forced us into some tough shots.”

In the final moments, Cody dribbled down the court and tossed up a deep shot. After it went around the rim and out, U-Mary’s final free throws pushed the score to 56-53.

Beisch had the hot hand all night, but his last-ditch half-court heave came up short. The Marauders celebrated on the court, knowing they handed their rival their first loss of the season.

“I thought they did a good job of trying to take the ball out of Max (Cody) and Kyle (Beisch’s) hands off ball screens and leaving two guys on them,” Murken said of the Marauders’ defense. “They were giving them a lot of attention. Some of our guys didn’t space well out of that. That frustrated Max sometimes and forced him into four turnovers, which is a lot for him.”

“We’ve got some pretty good shooters that weren’t making shots out there,” Murken said. “We’ve got to get them out there ready to shoot.”

MSU will travel to face Minnesota Duluth (5-1) in its next contest on Dec. 6. The Beavers and Bulldogs will tipoff at 7:30 p.m.