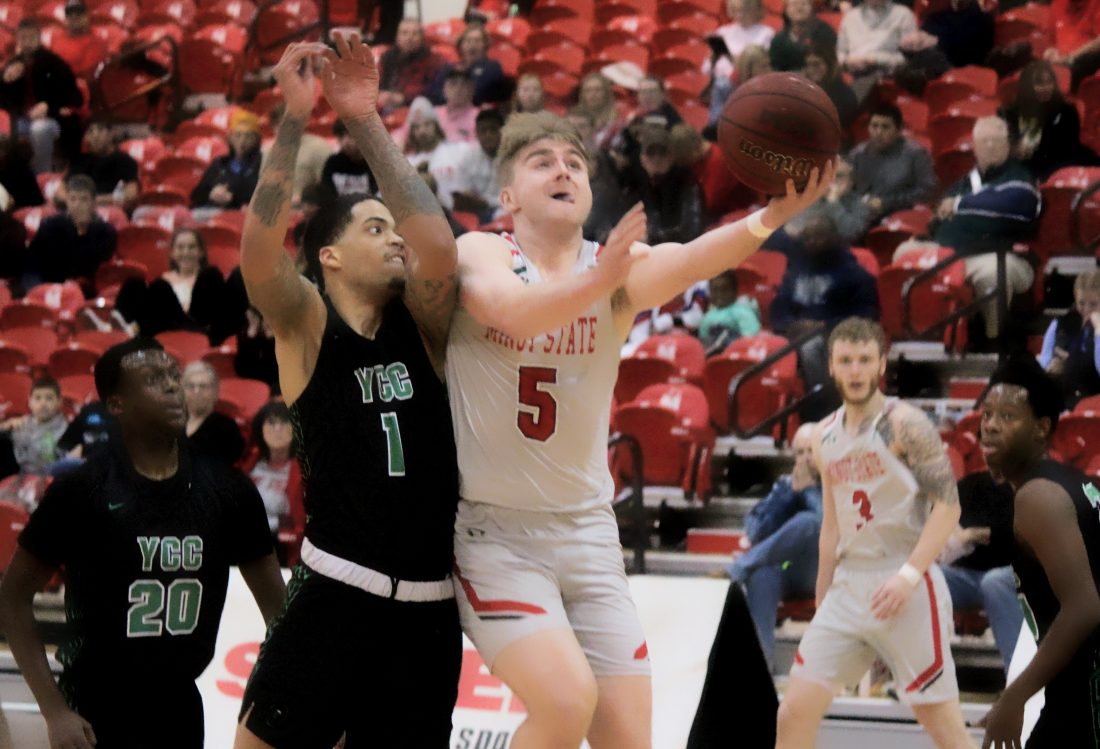 Alex Eisen/MDN Minot State junior guard Max Cody (5) gets to the rim for a layup Saturday evening against Yellowstone Christian College inside the MSU Dome. The Beavers won 92-40.

Redshirt freshman Logan Lamoureux, a Newburg native, added a little extra flair in scoring his first points as a Beaver. With the clock winding down at the end of the first half Saturday evening inside the Minot State Dome, Lamoureux came up clutch.

“I went in for a rebound and got the rebound,” Lamoureux recalled. “I took a dribble, turned and looked up to check the clock. I saw one second. So, I kind of just threw it up, and it went in.”

The Minot State bench cleared out quickly and mobbed Lamoureux as the Beavers rushed off to the locker room for halftime.

MSU went off for a season-best 52 points in the first half en route to a lopsided 92-40 win over winless Yellowstone Christian College (0-6). The Beavers improved their flawless record to 5-0.

“Playing a team that we should take care of business against, and we were able to get out early,” MSU head coach Matt Murken said. “I really liked some of the things we were executing. We tried to do some situational things throughout the game, even though we were ahead by quite a bit, and I also liked how we executed some of those things.”

“I think I played solid,” Cucovic said. “My teammates trusted me. They hit me when I was wide-open, and I hit them when they were wide-open. We were knocking down shots.”

Per usual, there is always room for improvement.

“Honestly, we could have played better,” Cucovic said. “The score in this game wasn’t as important to us. We had different line-ups in, and everybody shared the ball. We are glad in that aspect, but we can always get better.”

“Those two guys average about 40 points combined,” Murken said. “They really didn’t get anything easy, and their other guys struggled to score as well. We usually go into a game with one or two things that we want to take away, and I thought we did a pretty good job of that.”

Playing time was limited for MSU’s regular starters. Murken went to his bench early and often.

“The best thing was the ability to play some of the other guys a lot of minutes,” Murken said. “These are guys that show up every day trying to make our program better. We are going to need these guys. If you are on the roster, then we are expecting you to be making plays and helping us win basketball games. They have been doing that in practice, but it’s a little more fun to see them do it in games.”

“They need to get out there to get their feet wet a little bit and work through some things,” Murken said. “Learn on the fly, and I think they were able to do that a little bit tonight.”

The Beavers and their early-season unblemished record welcome Valley City State to the MSU Dome next on Tuesday at 7:30 p.m. The women’s team will take to the court first at 5:30 p.m. for the start of the doubleheader.