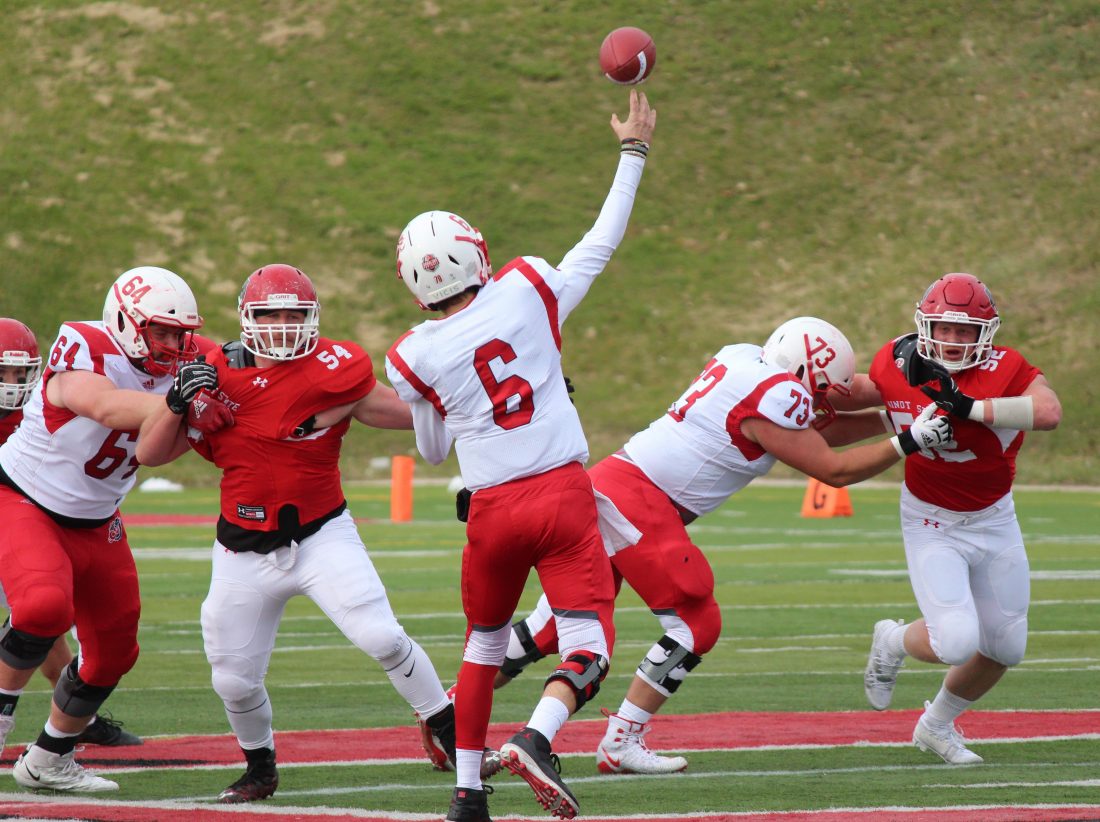 With nothing left to play for, Minot State junior quarterback Ben Bolinske dropped back and threw an interception into the hands of Minnesota State Moorhead defensive back Deiondre Taylor.

Rubbing salt into the wound, Taylor returned the ball to the end zone for a pick-six with only two seconds remaining in the Northern Sun Intercollegiate Conference contest.

The Dragons (5-4) inflated the final score to 49-20 and, bizarrely, kept the Beavers (3-6) perfect on the season (3-0) when Bolinske doesn’t throw an interception since MSU’s final offensive play on Saturday was the Beavers’ only turnover of the game.

Nonetheless, the late interception in garbage time was more or less just a sucker punch — the outcome of the game was decided long before then. MSU allowed Moorhead to pull away in the first half with a nickel-and-dime passing attack that tore the Beavers apart.

“We have to communicate and make sure we have the right coverages, fill in the gaps on defense,” MSU sophomore defensive lineman Logan Krueger said. “We have to go to the film and see what we have to work on. Communication was key today. We need to get back to that and let each other know what we are doing.”

Moorhead junior quarterback Jakup Sinani shredded the Minot State defense with quick passes underneath, simple slants or infuriating out routes to the sideline.

The Beavers had no answer.

Sinani was an impressive 40-for-51 through the air for a school-record 513 passing yards and four touchdowns.

This was Sinani’s first game action since a Week 3 injury.

“I don’t know if I can say enough good things about how (Sinani) played,” MSUM head coach Steve Laqua said in a Moorhead press release. “To be able to come back after six weeks and not be rusty says a lot about the type of engagement he had.”

Most of the Dragons’ damage came in the first half, where they put up 406 yards of offense (356 passing yards) to take a 35-7 lead into halftime.

“Coming into (the game), we pretty confident in ourselves,” Krueger said. “But, I mean, now we know what we have to improve on going into next week. We have to get back to the basics.”

Minot State’s lone score in the first half came courtesy of a 33-yard touchdown run by freshman Ali Mohamed. The Beavers found themselves with the excellent field position after a big kickoff return by Lavante Bushnell.

Moorhead made sure to kick the ball away from Bushnell after that return. MSU started to receive a bunch of squib kicks.

Bushnell was in the spotlight once again with 4:50 left in the third quarter. The senior receiver caught his 18th career touchdown pass to break the MSU Division II school record for the most touchdown receptions.

“I guess it’s a good feeling to break the record, but not the loss,” said Bushnell, who finished with four catches for 45 yards. “That was a game we could have won right there. That was a game that I know my team is better than that team. We let this one slip from us.”

Latrell McCutcheon forced a fumble on Moorhead’s next offensive play after Bushnell’s touchdown. The Beavers got the ball back on the Dragons’ 21-yard line but ended up settling for a 23-yard field goal by JoseLuis Moreno, 35-17.

“Our third quarter was really big,” Krueger said. “The offense scored, and we got that turnover right away. We kept the positivity up and still celebrated when we made big plays. We didn’t keep our heads down. If someone was down, we picked them up. This was just one game. We will fix the things we have to fix.”

MSU’s attempt at a historic comeback was effectively thwarted on a 73-yard touchdown reception from Sinani to Richter with 1:44 left in the third quarter.

Moreno added one more field goal from 25 yards in the fourth quarter, and Taylor capped a busy day with his pick-six in the final moments. Taylor was buzzing around the field all afternoon with a game-high 13 tackles (two for a loss).

Moorhead’s defense held MSU to 292 total yards with an average of four yards per play. Mohamed was the Beavers’ most productive weapon with 109 rushing yards on 17 carries, plus one catch for 18 yards.

MSU junior running back Isaiah Hall made three catches for 36 yards. Bolinske was 10-for-28 throwing for 122 passing yards.

With a lethal passing attack, Moorhead only rushed for 68 yards — making it the first time MSU has held an opponent under 100 yards rushing in a game this season.

“I never look at the scoreboard, I just play for all my brothers,” Bushnell said. “It doesn’t matter what is on the scoreboard. We keep playing for each other.”

Minot State heads to St. Cloud State next week on Saturday (Nov. 9) for its final road game of the season. The Beavers close out the regular season at home against Bemidji State on Nov. 16.