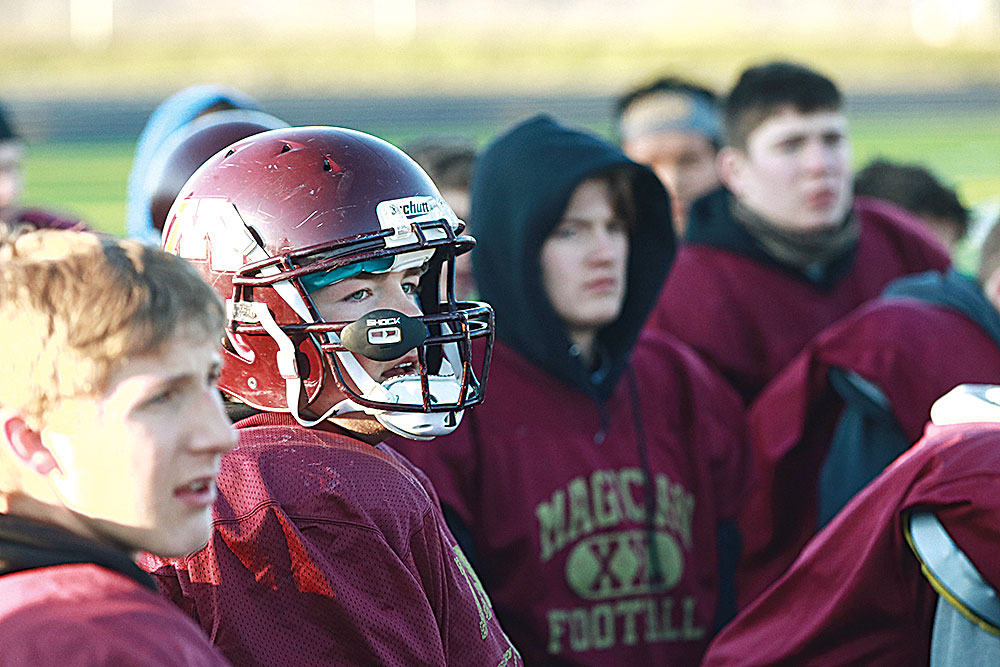 Jimmy Lafakis/MDN Sophomore offensive/defensive lineman Kaleb Spitzer listens to Minot coaches during a huddle at a practice. The Magicians will face the West Fargo Sheyenne Mustangs in a Class AAA playoff game at 7 p.m. this evening in West Fargo.

The Mustangs (8-1) already defeated the Magicians (5-4) once this season, a 28-14 victory back on Sept. 6. Now, Sheyenne looks to defend its home turf once more as the East Region No. 1 seed in the first round of the Class AAA playoffs.

As the senior quarterback for the West Region No. 4-seeded Magi, Gunville grasped the lessons he learned from the teams’ last contest. Although he ran for a touchdown and threw for another, Sheyenne snagged two interceptions.

“From a quarterback’s point of view, you kind of know where they are going to go based on where they went in the first game,” Gunville said. “You can learn the coverages off the mistakes you made in the first game. One of the (interceptions) was in the red zone throwing late across the middle on a dig route. The safety undercut it, and I have to make sure that he’s not there.”

The Magi earned the West Region’s last playoff spot after capturing a 27-0 victory over Legacy on Oct. 19 and a 41-0 win in Williston on Oct. 25.

While the Magi have improved both on the ground and through the air this season, their defense will be tested. After blanking their previous two opponents, the Magi will need to fend off Sheyenne’s triple option attack.

“We are very pleased with how our depth chart and our scout team guys are doing their best to help mimic their offense,” Minot head coach Barry Holmen said. “It’s hard to do. Whatever you do in practice, when it hits you in the game, it’s way faster. That’s partly why playing them already helps us a little bit.”

“They execute their stuff very well,” Holmen said. “We need to be better at attacking offensively. The first game, we didn’t finish a couple of times. We had the ball down in the red zone and didn’t score any points. We left a couple of chances out there early in the game.”

Sheyenne’s only loss came against Fargo Shanley on Oct. 4. Although the Deacons took the 40-24 victory, the Mustangs surrendered just 14 points in each of their first four contests.

“We know their personnel, what they are going to do and where they are going to go,” Minot senior offensive/defensive lineman Dylan Vigested said. “We can gameplan on how they are going to block it. Last time against Sheyenne, we didn’t run like we have the last couple of weeks. This game, I feel like we can run.”

The Magi will also emphasize pocket protections. Although the Mustangs boast a stout defense, opponents have struggled to sack Gunville all season.

“It’s a sigh of relief when I get to drop back and I know that the (offensive line) has got me,” Gunville said. “I know they will keep me safe. They form a pocket, so I can step up and make my reads and throws without having to worry about the edge pressure and inside pressure. I know they’ve got me.”

While Vigested protects Gunville, he will also perform double duty. He will help anchor a defensive line engineered to combat the Mustangs’ emphasis on misdirection and lead blocking.

“We’ve stepped up our defense this week,” Vigested said. “We’ve changed a lot of stuff up where it’s ‘Hey, you have to stop this.’ If we all do what we do and don’t try to do other people’s jobs, we will be fine. We are making sure we’ve got some people watching the dive. We’ve got people on the edge making sure the quarterback can’t keep it. We’ve got people rallying to the pitch, just in case that happens.”

Minot leads the teams’ all-time series 2-1, with both wins coming in the playoffs (2015, 2017). After their recent two-game winning streak, the Magi might be peaking at the right time to face their formidable opponent at 7 p.m.

“I think our guys have a mindset of having nothing to lose,” Holmen said. “We are the underdog. No one expects us to come home with a win, so why not shock a few people?”