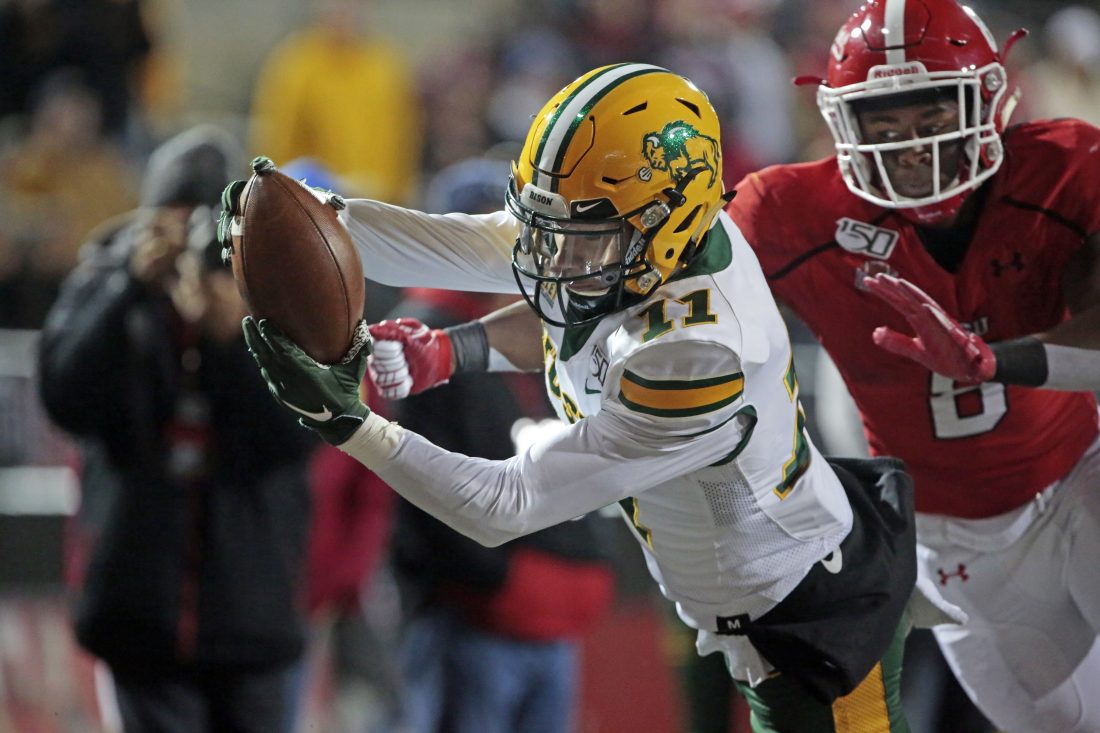 YOUNGSTOWN, Ohio — There was no need for the North Dakota State football fans to bite their fingernails at Stambaugh Stadium this time.

The No. 1-ranked Bison erupted for 42 points in the first half Saturday, Nov. 2, to cruise to a victory in a stadium that previously provided close calls in their past two trips to the facility. NDSU used that high-octane first half to fuel a 56-17 victory in Missouri Valley Football Conference play before 11,102 fans.

“Our guys were not going to come out and be flat and that was our challenge to them,” Bison head coach Matt Entz said. “I didn’t want to see us come out here and wait to play well. I wanted us to play well immediately. … It’s become the expectation and I don’t want to see start slow.”

The No. 1-ranked Bison (9-0, 5-0 MVFC) remained unbeaten and ran their winning streak to 30 consecutive games.

“I’m very surprised at how we played,” said Youngstown State head coach Bo Pelini, whose team dropped to 5-4 overall and 1-4 in the MVFC. “I’m not going to get into specifics, but they exposed us in a couple areas that they were smart to expose us in. They are a better football team than us right now. That’s obvious.”

In 2017, the Bison earned a 27-24 overtime victory against the Penguins. In 2015, the Bison needed 17 unanswered points in the fourth quarter for a 27-24 victory at Stambaugh. Those late-game heroics were not needed Saturday.

“They always come out and play us hard,” said Bison junior linebacker Jabril Cox, who had seven tackles. “We just wanted to have some spark and energy to stop that from happening.”

The Bison scored 21 points in both the first and second quarters. True freshman running back Kobe Johnson capped the big first half with a 94-yard touchdown return that gave the Bison a 42-7 lead with 42 seconds to play until halftime.

“As soon as I made the catch, I saw the hole,” Johnson said. “I trusted (my teammates) 100 percent to move them off the hash, I trusted my speed and just rolling.”

Bison quarterback Trey Lance completed 7 of 9 passes for 160 yards and three touchdowns by halftime. The 6-foot-3, 221-pound freshman also rushed for 32 yards and a touchdown through the first two quarters.

“We needed to show up with some energy today and I think we did,” Entz said. “We played really well early.”

The Bison built a 35-0 lead after running back Dimitri Williams scored on a 4-yard touchdown run with 2:35 to play in the second quarter. Bison tight end Josh Babicz had two catches for 12 yards and two scores in the first half. Babicz’s second TD catch covered 6 yards and gave the Bison a 28-0 lead with 9:17 to play until halftime.

The Bison were just as explosive in the opening quarter.

Lance scored on a 9-yard run that gave the Bison a 7-0 lead with 10:42 to play in the first quarter. That score was set up after long snapper Ross Kennelly recovered a Penguins fumble on a punt return that was caused by a hard-charging Cox.

“The energy was crazy on the sideline,” Cox said of the turnover that was converted into points.

The Bison took a 14-0 lead after Lance connected with wide receiver Christian Watson on a 69-yard scoring strike with 5:22 to play in the first. Lance added a 6-yard touchdown pass to Babicz that gave NDSU a 21-0 lead with 1:09 to play in the opening quarter.

NDSU continued with the explosive plays in the second half. Johnson motored for a 75-yard touchdown run that gave the Bison a 49-10 lead with 6:20 to play in the third quarter. Williams added a 30-yard touchdown for a 56-10 lead with 13:49 remaining in the fourth quarter.

Johnson rushed for 103 yards and a touchdown on six attempts after not playing the previous week against South Dakota State.

“We get him a crack and he can take it the distance,” Entz said. “His skill levels are going to continue to help us win ballgames.”

“It makes you sick. We saw right there in front of our sideline,” Entz said. “My thoughts go out to him. He’s an unbelievable competitor and a young man we’ve had to deal with for the few years.”

The Penguins used three quarterbacks in the game, including true freshman Mark Waid, who rushed for a team-high 79 yards and a touchdown on eight attempts. Waid also completed 5 of 10 passes for 51 yards.

“We have a lot of work to do as a team,” Waid said. “We need to bounce back. One game at a time. South Dakota is our main focus. We’re going to learn from this game, fix our mistakes and we’ll be ready to go.”