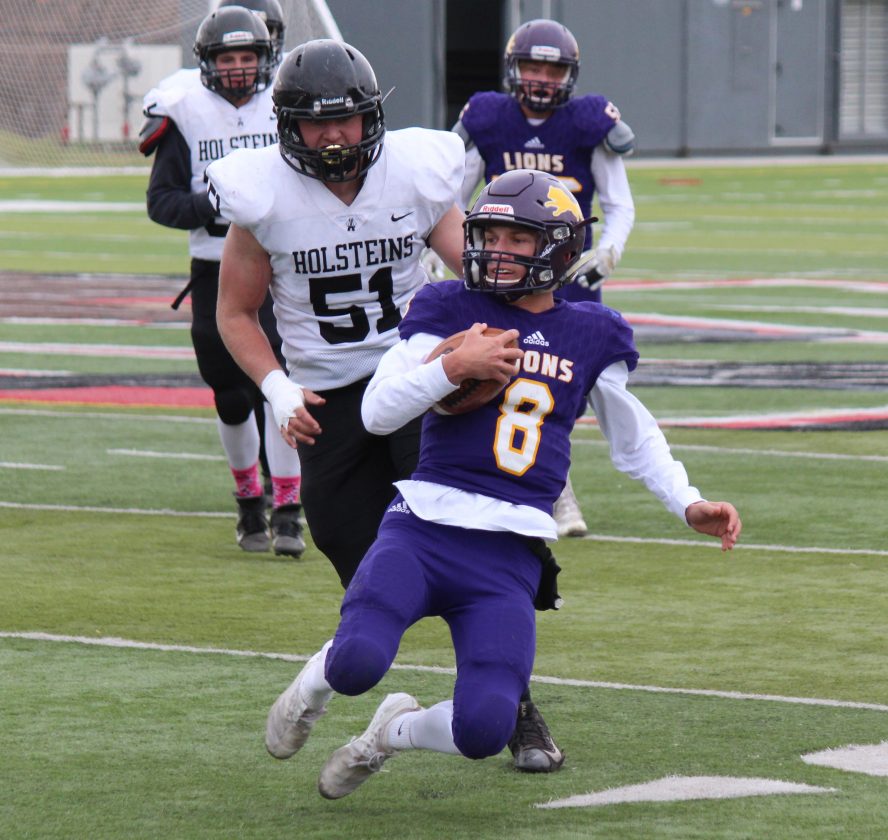 “Feels great, we finally got that playoff win,” Ryan head coach Roger Coleman said. “The game plan going in was to see if we could dominate upfront and see if they could match our tempo and physicality.”

Playing into the wind to start the game, Coleman put the ball in the hands of junior running back Jaxon Feller on the first eight plays from the line of scrimmage.

While the opening drive eventually ended with a turnover on downs in the red zone, the tone had been set.

The New Salem Holsteins (7-3) also had a first-quarter drive stopped in the red zone, much ado to a Kersey Harris sack.

Ryan broke the game open at the start of the second quarter by scoring three touchdowns in three minutes — now playing with the wind at the Lions’ backs.

Logan Merck got the offense going with a 48-yard catch and run for the first touchdown of the contest.

“North Dakota wind can do some crazy things,” Coleman said. “We have a great quarterback and skill guys, so we are tough to match up with. We saw that they didn’t want a high safety to help them out, so they wanted to play cover zero. It’s one-on-one, we took our best matchups and the quarterback did his job.”

New Salem fumbled the ball back to Ryan on its next offensive play, and Merck ran the same route to the other side of the field to get the Lions down to the 5-yard line.

Jaxon Feller finished off the quick scoring drive with his first of three rushing touchdowns.

“We have a great line up front, got to give all the credit to them,” Feller said. “Probably one of the best lines in the state.”

Hitting the repeat button, the Holsteins fumbled away its next offensive possession on a sizeable run. Bryson Elm recovered the football and brought the Lions back into New Salem territory.

Feller did the rest with a 20-yard touchdown run.

Increasing the lead to 28-0 going into halftime, Sanders hit Merck streaking up the middle of the field for a 63-yard touchdown strike.

New Salem’s Grant Gerving and Ryan’s Jaeger Lundeen traded interceptions at the end of the first half.

“I threw some good balls, threw some bad balls — had two interceptions — but my teammates were there for me,” Sanders said.

Feller broke the plane of the end zone for a third time with 3:38 remaining in the third quarter. Sophomore kicker Bram Johannsen missed his only extra point on five attempts, 34-0.

The Lions advance to the Class A quarterfinals against Bowman County (8-1) next Saturday, Nov. 2. Bowman County beat Kenmare/Bowbells/Burke Central 52-0 in the first round.

Ryan will have to travel to Bowman County next week.

“There are eight teams left after today,” Coleman said. “We are pumped for that, and that excitement will keep us going. We just have to have a great week of practice and try to get into the semifinals.”