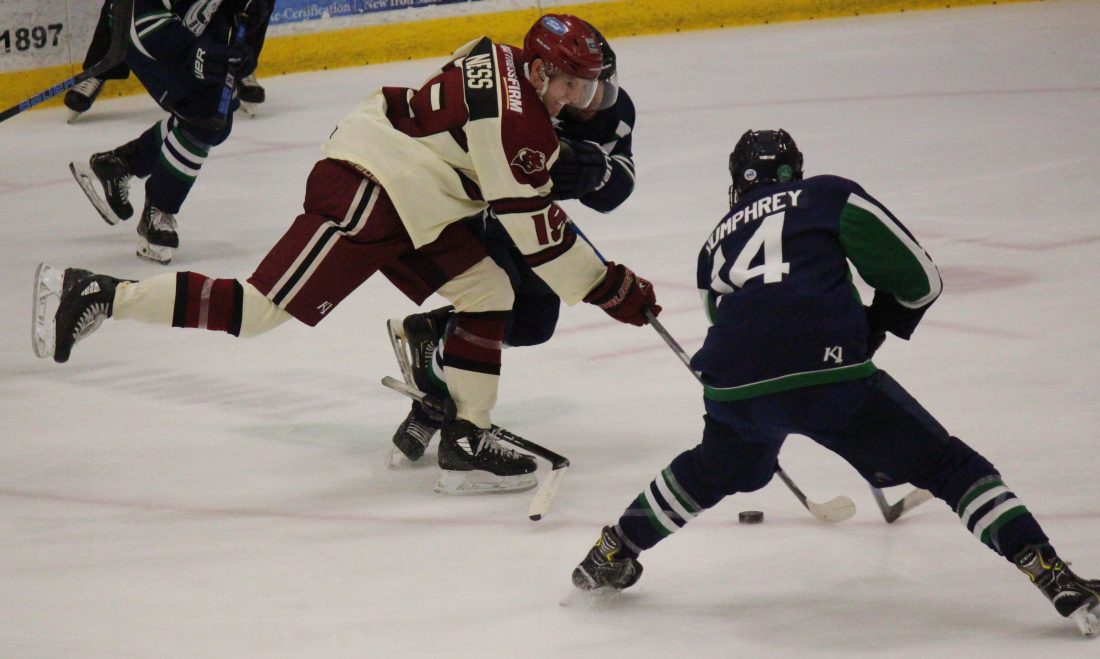 Alex Eisen/MDN Minotauros forward Kevin Ness (19) attempts to get a shot off against the St. Cloud Blizzard Saturday evening at Maysa Arena.

Every time the Minot Minotauros scored in the first two periods, the St. Cloud Blizzard responded right away.

The Minotauros finally broke the deadlock with two third-period goals to earn a 5-3 victory Saturday night at Maysa Arena.

“We addressed it after the second period; three times we scored and the next shift or the shift after they scored,” Minotauros head coach Marty Murray said. “That just can’t happen.”

Both teams scored in the first period by utilizing the real estate behind the net.

Minot (7-1-2) stuck first on a puck shot off the end glass by Wilhelm Wassberg that bounced back behind Blizzard goaltender Britt League. Jack Westlund poached in the awkward ricochet.

“How you respond after a goal, for or against, (is important),” Murray said. “We didn’t do that well tonight.”

The score remained tied at 1-1 until 19 seconds ticked off in the second period.

Minot’s leading goal-scorer Andranik Armstrong-Kingkade batted down a shot/pass in front of the net and caught League out of position for a simple finish into a wide-open net.

“(Armstrong-Kingkade) is a guy that’s zero-maintenance from a coaching standpoint,” Murray said. “He works his tail off every day and has created a lot of success for himself just because of his work ethic.”

The Blizzard (3-6-2) were back even roughly two minutes later. Luke Aquaro buried a rebound goal off an initial shot by Brady Bjork.

Trading goals for a third time, Armstrong-Kingkade netted his second goal of the period on a power play — his eighth goal in 10 games this season — before the Blizzard had the quick answer less than a minute later.

Former Minotauro Ryan Green knotted the score at 3-3 heading into the third period. Assists went to Bud Winter and Ben Ward, who was given a 10-minute penalty a couple of minutes later for unsportsmanlike conduct.

“We probably gave up three or four goals this weekend where we left a guy unattended in front of the net,” Murray said. “We have to protect our house and work from there. We got spread out a little bit and left good players in open areas to shoot.”

A tired Blizzard line got burnt for the Minotauros’ fourth goal. Brennan Couet picked out Kyler Kleven streaking to the net. With traffic in front, Kleven snuck the puck through.

Instead of St. Cloud responding right away again, the Minotauros doubled up with a goal from Isak Dahlin two minutes later, 5-3.

That held up to be the final goal of the night as the Minotauros couldn’t find an empty-net goal to match Friday’s scoreline of 6-3.