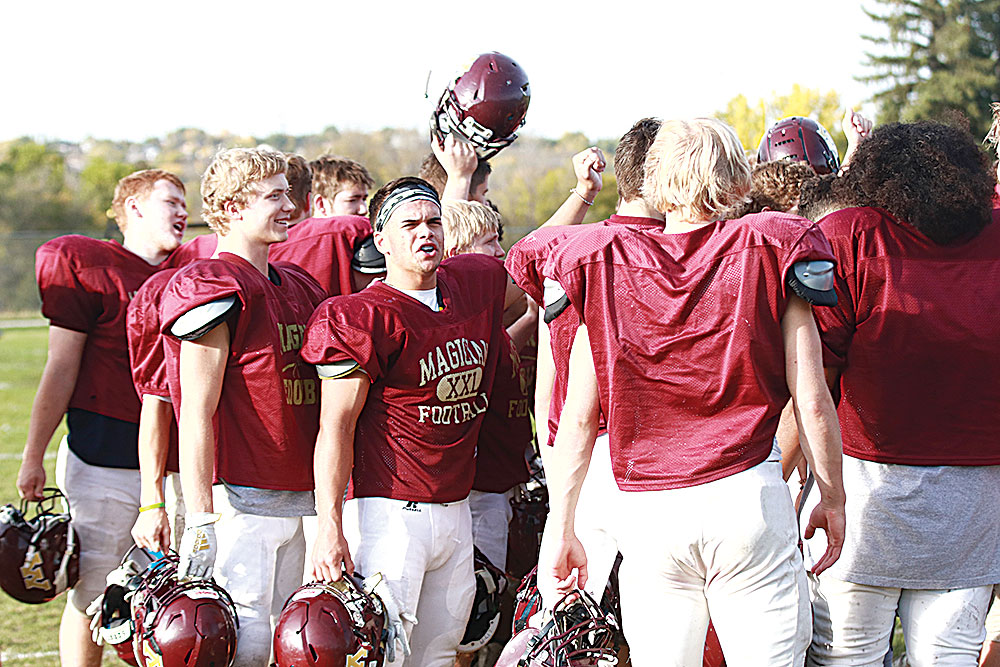 Jimmy Lafakis/MDN The Minot High School football team huddles after a practice. The Magicians will square off against Bismarck High in Bismarck at 7 p.m. this evening.

Those are just a few items on the laundry list of challenges that await the Minot High School football team as they match up with Bismarck High.

The contest between the Magicians (3-3, 2-2 WDA) and the Demons (3-3, 3-1 WDA) is scheduled for 7 p.m. this evening at the Bismarck Community Bowl. However, the game could be postponed until Monday, Oct. 14, due to weather concerns. A final decision will be made this morning.

Snow and treacherous winds loom, but the contest presents a significant chance for the Magi to gain ground in the WDA standings. Minot, Bismarck High, Legacy (3-1) and Mandan (2-2) are fighting for potential playoff positions.

Last season, the Demons earned a 42-7 win over the Magi in Minot. They went on to win the Class AAA state championship 21-16 over Bismarck Century.

Bismarck High earned a 38-21 win in Dickinson last week. Overall, the Demons have scored 153 points and have allowed 158.

“We recognize the quality of the team,” Holmen said. “We also recognize it’s a great opportunity. It’s a chance for us to lift our game. We’ve got to learn how to win big games with this bunch of guys, and this is a big game. I think our kids understand the importance of playing as a unit.”

Minot will enter the game on the heels of a 21-13 win in Jamestown. Minot senior quarterback Jaxon Gunville found senior wide receiver Logan Fisher for a 60-yard passing touchdown in the fourth quarter.

This week is a new test. Moreover, it marks a rivalry matchup at a critical juncture.

“We really want to win this one,” Fisher said. “We haven’t beaten Bismarck High in a while, and I feel like this is a good chance where we can beat them.”

Fisher’s assertion is accurate — the Magi have not defeated the Demons since 2014. Minot earned a 22-7 victory over Bismarck High in the Class AAA state semifinals.

Although the pressure of making the playoffs is mounting, the Magi kept a light mood at practice this week. After Minot’s junior varsity team defeated the Demons 26-8 on Monday, Holmen congratulated senior wide receiver/defensive back Harrison Shanklin on a critical special teams tackle.

The head coach affectionately referred to Shanklin as “Shank the Tank,” which caused the Magi to cheer in unison.

“It’s always fun,” Fisher said. “We’re always laughing, always having a good time with them. Once it’s over, I’m going to miss it.”