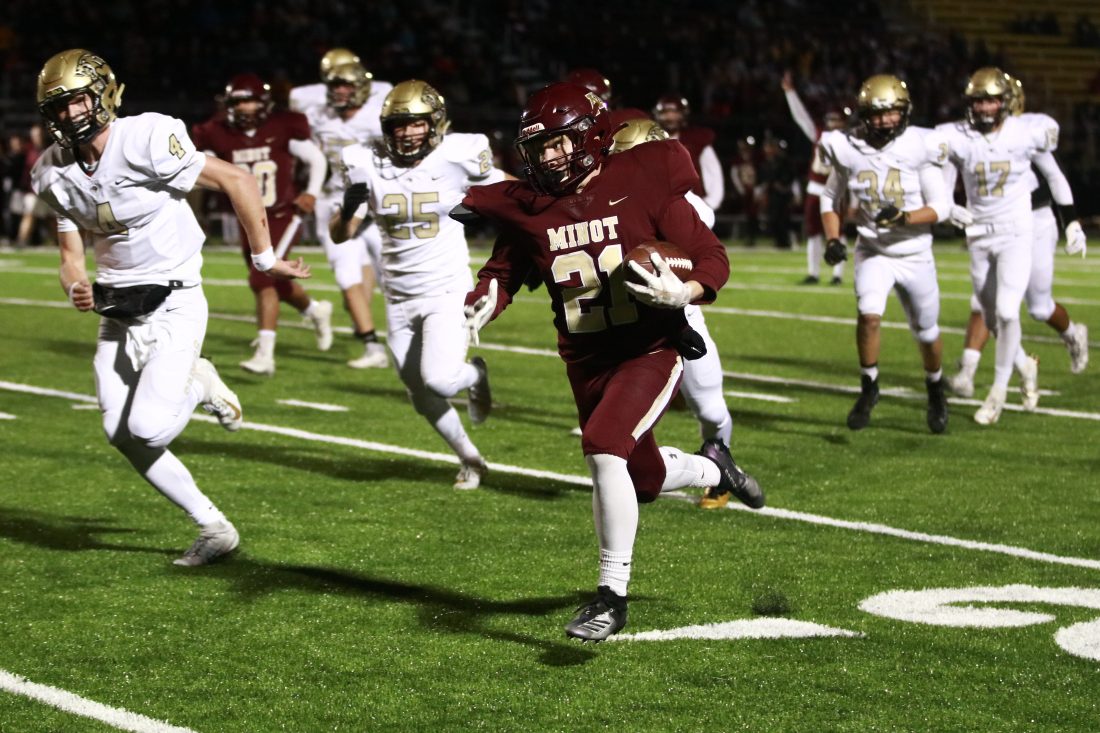 Jimmy Lafakis/MDN Minot High junior running back Chase Burke sprints past Legacy defenders to score a touchdown in the first quarter of Saturday night’s game at Duane Carlson Stadium. The Magicians earned a 27-0 victory over the Sabers in Minot.

When a group of Minot High School football seniors gathered at Kroll’s Diner on Saturday morning, they discussed their plan of action.

After the Magicians (4-4, 3-3 WDA) devoured French toast and pancakes, they defeated Legacy (4-4, 3-3 WDA) 27-0 in a Class AAA game at Duane Carlson Stadium on Saturday evening.

“This morning, we had our team walkthrough and eight or nine of us wanted to get together,” senior tight end Quaid Frantsvog said. “You know how big this (Legacy) game is. We sat down and talked about what we were going to do. It worked out.”

Minot’s win keeps the team in the playoff hunt, and the Magi now own a tiebreaker over Legacy. In order to earn their first-ever win on the new “Magic Carpet” turf at Duane Carlson Stadium, the Magi stepped up their game.

Minot head coach Barry Holmen said the Magi put together most complete performance of the season on senior night. The offense chipped away at the Legacy defense, and the defensive efforts shut down the Sabers’ threats.

“For the first time this season, we played a four-quarter game with great intensity,” Holmen said. “We matched the physical play of their guys. They are big up front and we matched it.”

The Magi’s running attack was especially effective, as all four of their touchdowns came on the ground. Junior running back Chase Burke set the tone with a 31-yard touchdown run in the first quarter.

After senior quarterback Jaxon Gunville punched in a one-yard touchdown run in the second quarter, Minot took a 14-0 lead into halftime.

“Shout-out to our boys up front,” Gunville said. “They created holes and lanes for us to run through all night.”

Gunville found paydirt on another one-yard touchdown run late in the third quarter, creating even more distance between the teams. Legacy was unable to find an offensive rhythm in the fourth frame.

With 16 seconds left, junior Ethan Johnson cashed in on a 10-yard run. After Minot took a knee, the final score held at 27-0.

“It wasn’t perfect,” Holmen said. “We are far from perfect. But it was a good fight. We established the line of scrimmage. We were able to run the ball pretty well. Pretty soon, they had eight in the box.”

The contest featured some chippiness, as Legacy was assessed multiple penalties in the second half. In the battle of emotions, Minot won out.

The Magi avenged last season’s 35-27 loss to the Sabers.

“They kind of took it to us last year,” Gunville said. “To hold them to zero, that’s amazing. It just felt great.”

“We’re peaking at the right time,” Frantsvog said. “If you look at Williston’s record, you might say we could take it easy. But we can’t take it easy. They’ve competed with some really good teams this year. Hopefully, we just win to keep playing.”