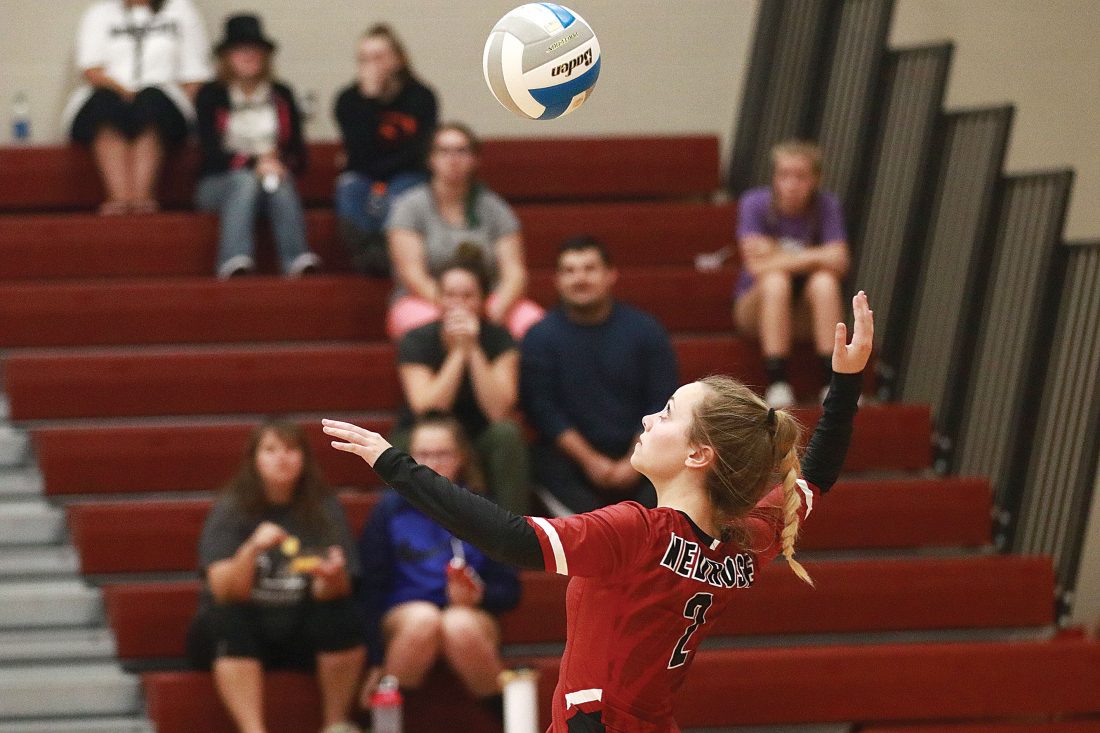 Raquel Maldonado knew the Nedrose Cardinals were tired. The Nedrose volleyball team had battled at last Saturday’s Glenburn Invitational, and the Cardinals came into Monday night’s contest on short rest.

Berthold took control of the Class B Region 6 match early on. Although the Cardinals continuously fought back, they struggled to find initial answers.

“Lewis & Clark did a nice job tonight,” Maldonado said. “We just had to come back, fighting stronger. I think us going five sets, a lot of times, is typical of us. It just seems to be that when we go five sets, we can pull it out.”

In their second match of the season, the Cardinals established a trend of earning five-set road victories. Nedrose defeated South Prairie 3-2 back on Sept. 5.

Monday’s opening two stanzas played out like a game of cat-and-mouse. The Bombers stayed ahead and the Cardinals chased.

The tides started to shift in the third set, as Nedrose opened up a 12-7 lead. The Bombers responded with a timeout.

Maldonado stressed some key reminders to the Cardinals.

“Communicate and move their feet on the floor,” she said. “Move to get the pass, so that they can get the set and get the kill. In that order.”

This time, Berthold started to chase, but fell. The Nedrose faithful flexed their muscles in the student section as two blocks helped the Cardinals clinch the victory.

The Cardinals stormed out to a 6-2 lead in the fourth set off the strength of some shrewd serving. They continued to push ahead, winning the set 25-21.

“It was a little stressful,” Nedrose senior outside hitter Kali Koetter said. “We go through these roller coasters, so we’re up and down and up and down. Trying to get ourselves to stay up is a challenge, but we stayed up pretty well this game.”

With the fifth set tied at 10-10, Nedrose found a way to defend home court. The Cardinals ripped off five straight points to earn the 15-10 set victory.

“We tell each other, ‘We beat them one time, we can do it again,'” Koetter said. “Just until we get to that last set. Then, we really try to push through.”

“It’s definitely a tough loss,” Berthold head coach Katlyn Sandy said. “We learned if they don’t communicate, that’s how it is going to go. If the girls shut down and stop talking, this is the kind of the turnout they are going to get. They always need to make sure that they are in communication with each other and moving.”

Next up, Nedrose will travel to Rugby this evening. Berthold will head to South Prairie on Sept. 19, and both contests are set for 7 p.m. start times.

“I’m really proud of the team for pushing through,” Koetter said.