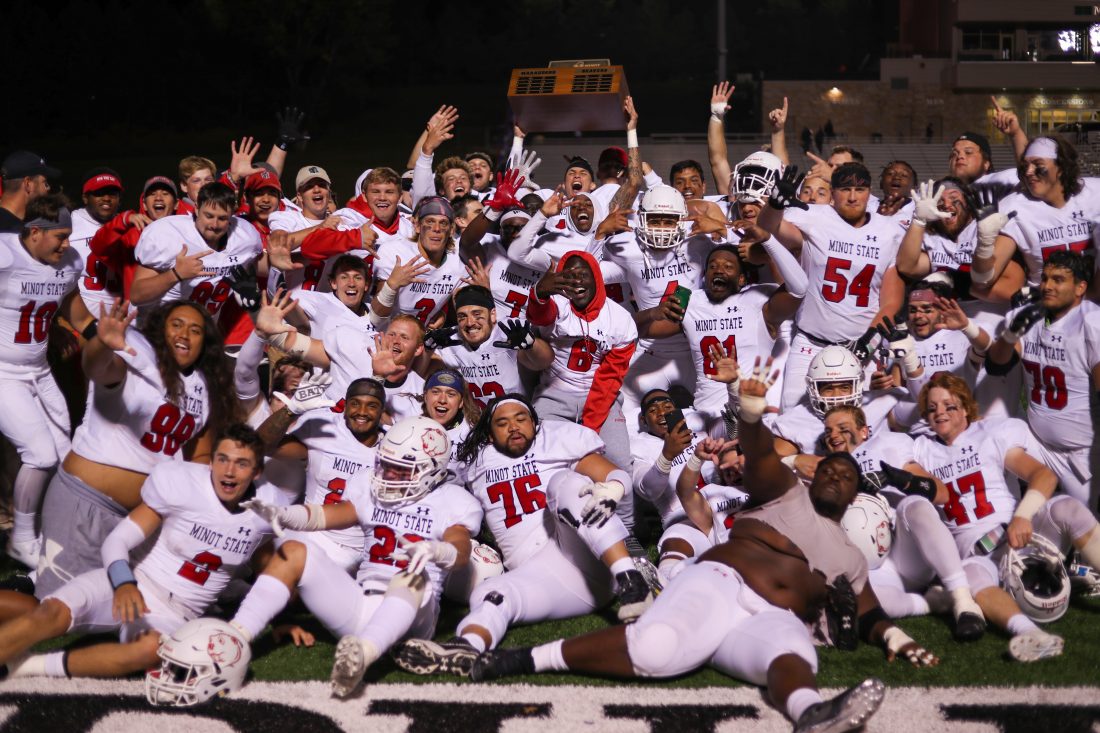 BISMARCK — In a rivalry contest that bizarrely started with a safety, the more consistent team prevailed at the end of the night.

The Minot State football team battled back from a 15-0 deficit on the road Saturday evening against the University of Mary to capture the Battle of the Big Lake trophy for a fifth consecutive season, winning 34-29.

It also marked Minot State’s first win of the season, which snaps a 10-game losing streak that had built up from last season.

U-Mary (0-3) dominated the scoreboard in the first quarter after a suffering a slight setback — MSU safety Justin Coleman picked off U-Mary quarterback Logan Nelson on the goal line.

MSU (1-2) started that next drive on its own three-yard line and backtracked into the end zone for a game-opening safety.

Nelson made matters worse for the Beavers two offensive plays later when he took off for a 55-yard touchdown run.

The Marauders hit another home run play four minutes later when Danny Kittner was left open for a 46-yard touchdown reception. After a failed two-point conversion, U-Mary was still in the driver’s seat up 15-0 at the MDU Resources Community Bowl.

Touchdowns got swapped back-and-forth until U-Mary was holding a 29-14 advantage.

U-Mary responded to both of those scores with rushing touchdowns by Nelson — 62 yards right up the middle and a 15-yard scamper.

Not to be outdone by a quarterback, MSU freshman running back Ali Mohamed sprinted through U-Mary’s defense for a 43-yard touchdown run with 8:49 left in the third quarter. Mohamed racked up 85 yards on 14 carries.

Later in the third quarter, a 37-yard field goal by senior JoseLuis Moreno drew the Beavers within five points at 29-24.

Highlight-reel magnet Cory Carignan gave MSU its first lead of the contest with a dazzling 35-yard touchdown reception that he hauled in despite U-Mary getting called for pass interference.

The Beavers took a 31-29 lead into the fourth quarter.

U-Mary’s offense completely stalled out, and they also lost Nelson late in the game due to an injury.

Meanwhile, the Beavers turned to Moreno twice more to put the victory away.

The reliable kicker/punter was first called upon to drill a 46-yard field goal with 5:18 remaining.

Then, with 2:36 remaining, Moreno was tasked with pinned the Marauders deep with a punt.

Simple, right? Not exactly. The snap sailed over Moreno’s head. Moreno quickly ran back to retrieve the ball and somehow got off his tradition left-legged, rugby-style punt. The ball was downed at U-Mary’s 12-yard line.

MSU’s defense cleaned up the rest, getting off the field on a fourth down and 32.

Two kneel downs, and the celebration was on. For a fifth straight season, bragging rights and a hefty trophy for the Beavers.

U-Mary outgained MSU 490-430, but the Beavers had 10 more minutes of possession.

Bolinske had one of his best passing performances in his Division II career, going 19-for-27 for 245 yards and three touchdowns.

Isaiah Bigby came up with a critical interception in the fourth quarter to help the Beavers wind down the clock. Bigby and Tamrick Ross each came away with sacks as well. Roma’n Grissett tied Bigby with a team-high five tackles.

MSU returns to action next Saturday, Sept. 28, on the road against Minnesota Crookston. 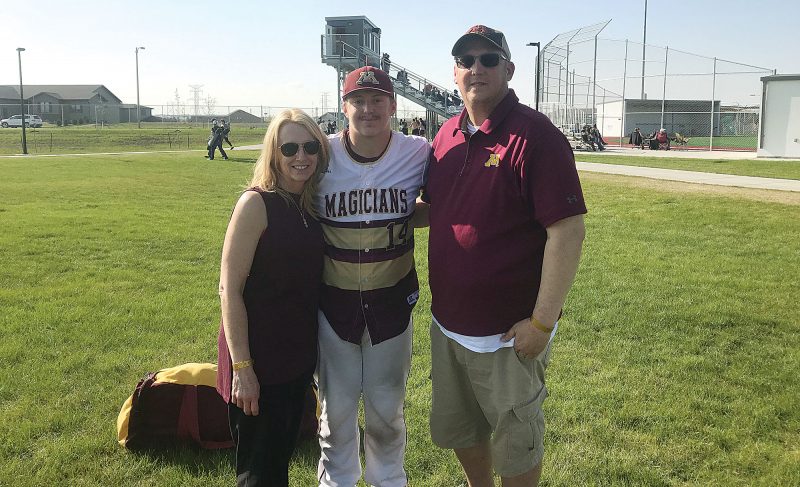 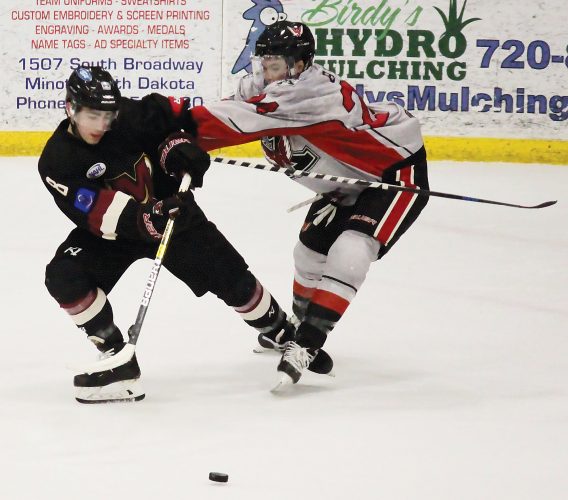 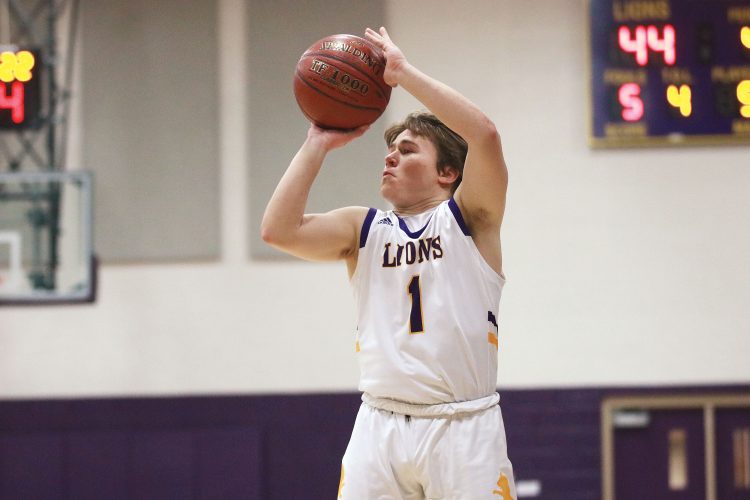 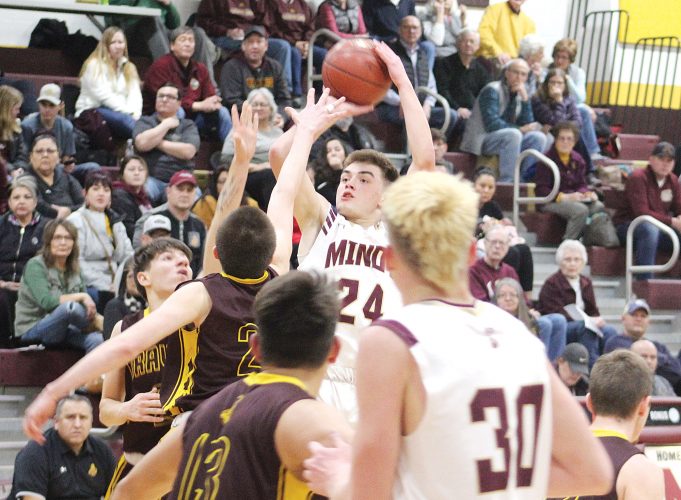