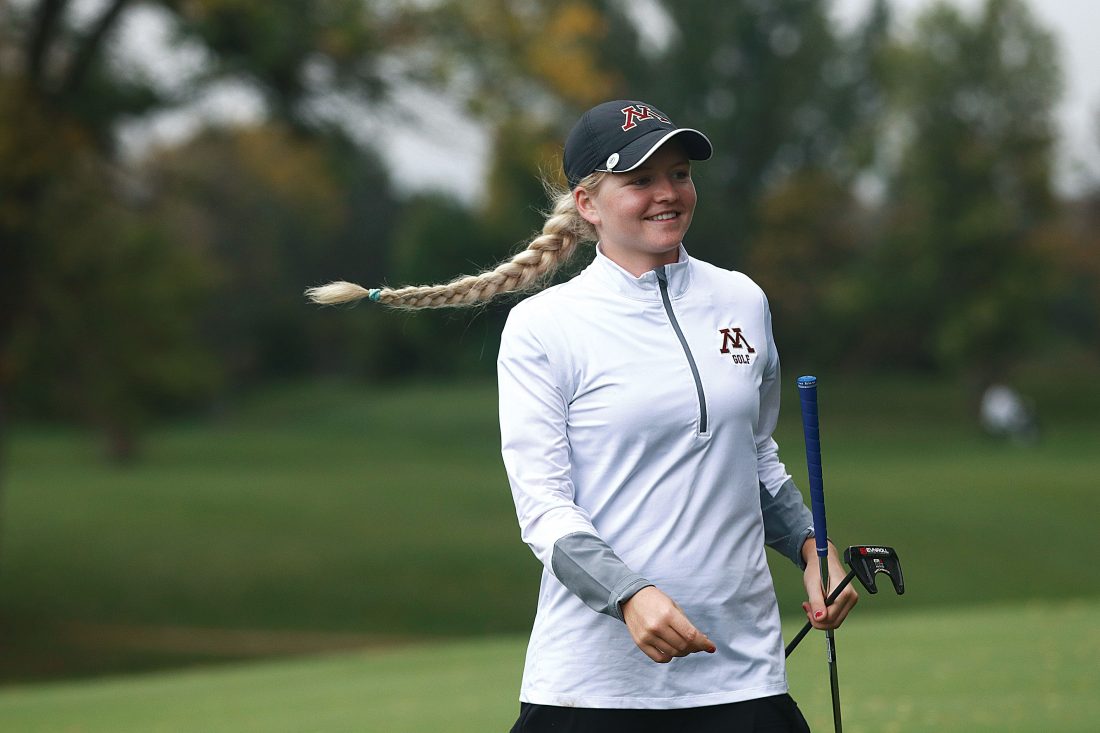 Jimmy Lafakis/MDN Minot High senior Becca Tschetter smiles after finishing her round at the Vardon Golf Club. Tschetter finished with a 76 on the afternoon.

When the storm came, it didn’t roll through quietly.

The Minot High School girls golf team had to brave the elements during its only home meet of the season at Vardon Golf Club on Friday. The Majettes earned a second-place finish, as Bismarck Century claimed the top spot.

The meet was delayed as rain and thunder stormed through the area. Century posted a team score of 311, while Minot tallied a final team score of 325.

“We came close,” Minot High head coach Scott Foltz said. “The weather was beautiful for 17 holes, but we realized we were operating against the clock.”

Seniors Becca Tschetter and Jaci Jones led the way for Minot. Tschetter shot a 76, while Jones posted an 82.

Savannah Brintnell and Bella Dobrinski were close behind, shooting respective scores of 83 and 84. All four golfers qualified for state, as the cutoff was 87.

Sydney Berg and Avery Falcon rounded out the scoring with two 95s apiece.

“We did really well,” Jones said. “If we just keep working on our short games, I think we can be really good at state and regionals this year.”

The Majettes started on the slower side, but finished strong. Each varsity golfer posted a better score on the back nine than the front nine.

“There’s something about flipping that scorecard over and starting fresh on a new nine,” Tschetter said. “To have a new start on your game and knowing, ‘Well, now I need to start erasing those bogeys with birdies.'”

As the Majettes head into postseason play, Foltz said the team is peaking at the right time.

“They faced adversity and bounced back big-time to score for us today,” he said. “I think we are playing our best golf of the season.”

When the sky cleared at Vardon, Foltz called his team together in a huddle outside of the clubhouse. The Majettes discussed their plan of action.

Next up, the Majettes will participate in the regionals meet. The meet is set for 10 a.m. Monday, Sept. 23, at the Links of North Dakota in Williston.