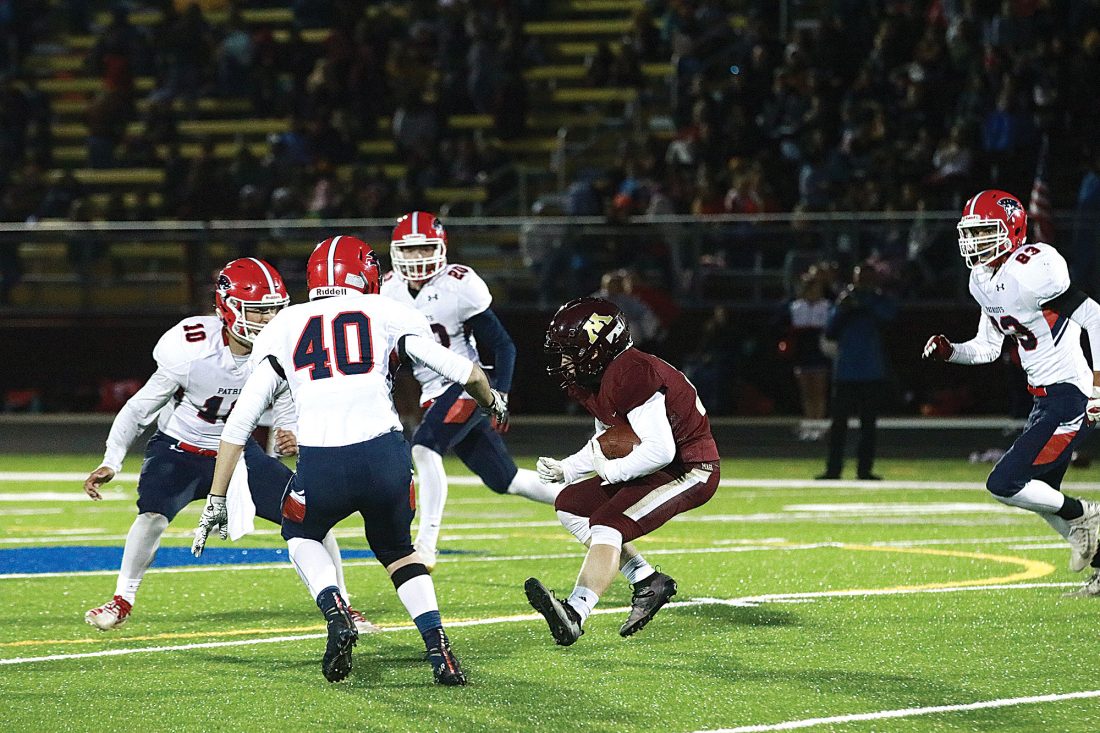 With the Duane Carlson Stadium crowd rocking, the Bismarck Century Patriots proved why they are ranked No. 1 in Class AAA football media poll.

“They’re pretty good, aren’t they?” Minot head coach Barry Holmen said. “They are big and physical. We hung with them.”

Century scored at least once in each quarter, spoiling Minot’s homecoming game. In the first half, the Patriots used their ground game to their advantage.

Senior fullback Jace Anderson and junior running back Cade Garcia found the end zone for a combined three touchdowns. After Anderson’s quick score, Garcia cashed in during each of the first two quarters.

In between those touchdowns, Minot struck. In the Magi’s first successful drive of the day, senior quarterback Jaxon Gunville punched in a one-yard sneak.

The Patriots threatened once again but were limited to a 22-yard field goal from junior kicker Wade James.

“You get knocked down, you get back up,” Holmen said. “You keep working. We’ve got to play football, right? Not much better things to do than that, I’ll tell you.”

Minot stopped the potential touchdown threat, but Century led 23-7 at the half. During the half, Minot senior running back Payton Philion walked on the field with crutches after a leg injury.

Although the injury’s severity is unknown, it proved to be a critical blow to the Magi.

“We lost a good player tonight,” Holmen said. “I don’t know how significantly, how long-term it is. When our tailback went down, we were still okay and we competed. And then, it just got away from us in the third quarter there.”

Those two scores helped the Patriots extend the gap, and Feeney stayed in command of the Century offense.

A smattering of penalties held Minot’s drives back.

“Honestly, I feel like we’re there,” Minot senior offensive/defensive lineman Preston Jones said. “We’re just shooting ourselves in the foot, it seems like. Every game. If we can play a crisp and fundamental football game for four quarters, I feel like we’ll be a pretty good team.”

In the fourth quarter, Gunville found senior wide receiver Johnny Butz for an early strike. It would be Minot’s last score of the game, as Century tacked on a 29-yard touchdown run from senior running back Grant Anderson.

“The plays were there,” Jones said. “We need to start making them. They were a little bit bigger up front, so we have to play a little more physical up front and push back their defensive line. Run the ball a little bit better.”

The evening ended with the Patriots celebrating on the “Magic Carpet” turf.

“We’re challenging our team to come back next week,” Holmen said. “Hungry and ready to go. There are a lot of teams who are going to get beaten by Century. That one, we put aside and we learn from it. We take care of business down the stretch here. Let’s make that last game meaningful.”

Both teams will play on Oct. 4. The Magi will travel to Jamestown for a 7 p.m. matchup, while the Patriots will host Mandan for their homecoming contest at 6:30 p.m.