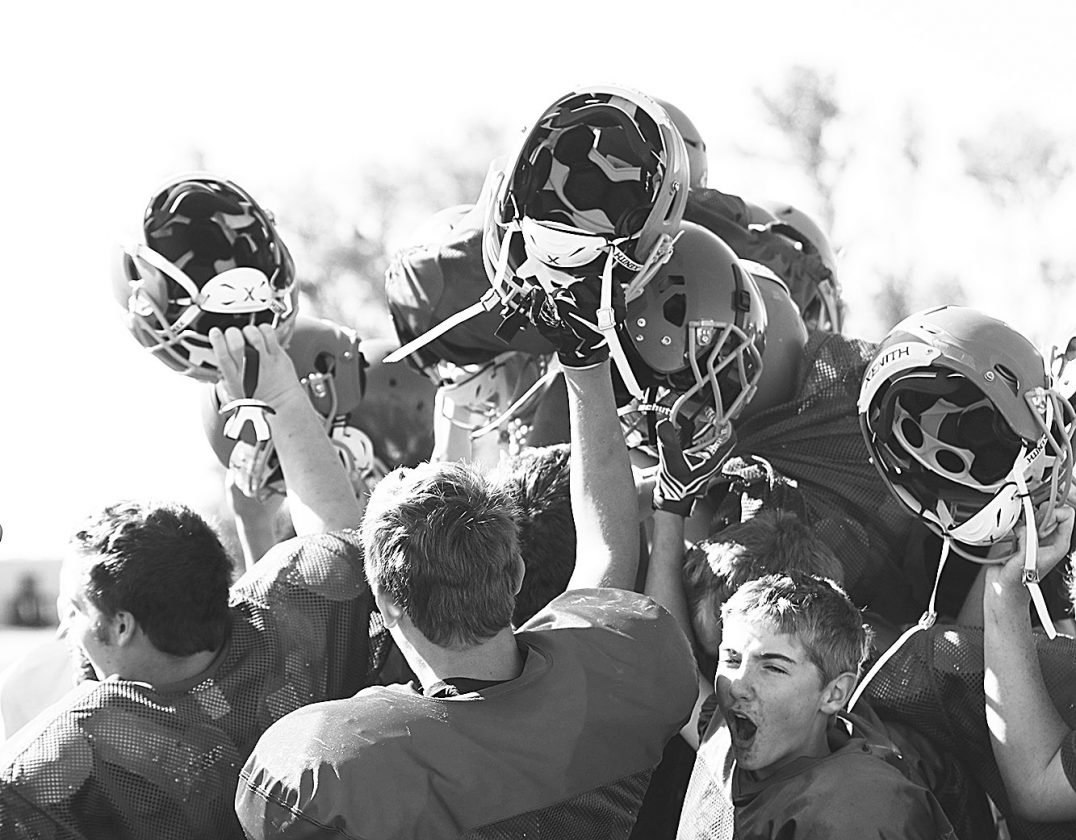 Jimmy Lafakis/MDN The South Prairie football team huddles after a practice. The Royals will play Southern McLean in their first game on Friday.

As Justin Wieseler surveys the field, he finds himself in a unique position. The South Prairie head coach is tasked with leading a varsity football team from the ground up.

The Royals will square off against Southern McLean on Friday night. The matchup will mark the first official varsity game in school history. South Prairie will compete in Class A, Region 3.

“I think they have done a good job coming together so far,” Wieseler said. “I think they really enjoy being out here and playing with each other. We’ve got a lot of good, youthful energy from the kids.”

South Prairie is quite young. Three seniors and four juniors will take the field for the Royals this season. The remaining players are underclassmen and eighth graders.

Gibney, a senior southpaw, said he likes the challenge.

“I know that we are all ready to compete,” he said. “Obviously, in the first year, you have to put a lot of work in. We have to try to make a name for ourselves.”

Three of the four juniors (Cooper Bohl, Gavin Bergstad and Ben Lindbo) serve as both offensive and defensive linemen. The final junior is Braden Anderson, a wide receiver and defensive back.

All the upperclassmen will work together, as the offensive line will have to provide holes for Korslien and Hood to scamper through. Anderson is the oldest receiver, as freshmen Evan Meinekie, Dylan Hawkins and Lane Cooper round out the core.

“We have to be in shape,” Korslien said. “We don’t have as many older kids as we’d like, but we like the kids that we have. I think we will be just fine. We’re going to be quick.”

Wieseler said Gibney and Korslien are two of the team’s main leaders.

“You have to carry the torch to the younger kids,” Gibney said. “I’m just trying to help the little kids out as much as I can. I want to teach these kids so they can have a better high school career. I want to let them learn and try to be a good role model.”

Wednesday marked South Prairie’s first day of school. Korslien’s senior year has officially begun, and the senior sets his example while taking time to reflect on his football career.

“This is my last camp, so it’s getting to me,” he said. “There’s only one year left. Most kids don’t get this opportunity we have out here.”

Although the Royals played at the junior varsity level over the past several seasons, varsity offers unique peaks and valleys. Their first test will come in Washburn against Southern McLean.

“They’ve been excited about being out here and playing,” assistant coach Darwin Routledge said. “You know, it’s football. It’s been a learning curve for some of them because they haven’t played a whole bunch. So they’ve had to get used to the speed and how physical it is.”

Routledge also serves as South Prairie’s principal. He knows these student-athletes well, and acknowledged the gravity of Friday night lights.

“I think there’s going to be excitement,” Routledge said. “There will be a lot of nerves. The nerves go away after you get smacked a little bit. You start to run into people, the nerves go away, and you just start to play.”