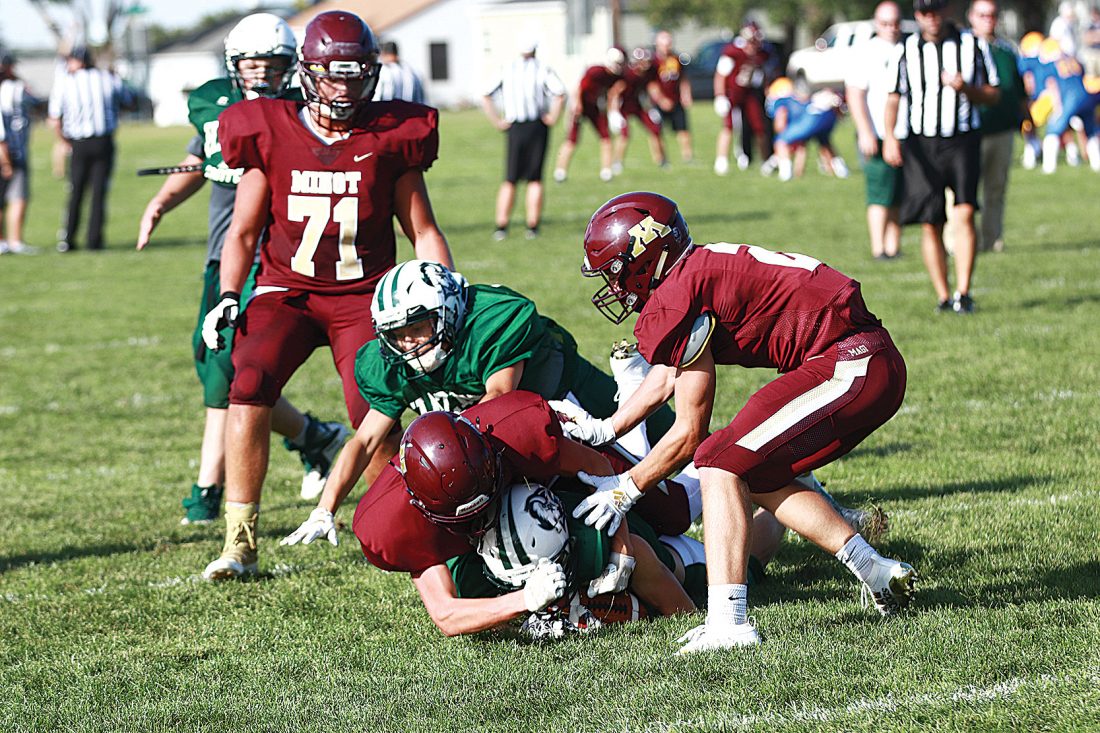 Jimmy Lafakis/MDN Minot High defensive players bring down a Hazen player during a scrimmage at Jim Hill Middle School on Aug. 22. The Magicians will open their season against Grand Forks Red River at 7 p.m. this evening at Herb Parker Stadium.

When Barry Holmen surveys the field during Minot High’s football practices, one particular thought sticks out in the head coach’s mind.

The Magicians have something to prove.

Last year, Minot High finished with a 4-5 record and missed the playoffs for the first time since 1996. Before last season, the Magi had posted consecutive winning campaigns since 1999.

A preseason scrimmage against the Beulah Miners and the Hazen Bison helped the Magi comprehend that necessary work. Last week, the teams each used 15 offensive plays to help work out kinks.

“The best part of the scrimmage is that you get exposed in a lot of places,” Holmen said. “Beulah and Hazen are both great teams and have excellent, physical athletes out there. They tell us real quick what we need to improve on. It’s not hard to convince our kids of that.”

The Magi received votes in the Class AAA Preseason Media Poll and will look to senior quarterback Jaxon Gunville once again this year. In June, Gunville committed to play basketball at Minot State.

Holmen has high hopes for his leader under center.

“He’s fearless,” Holmen said. “He’s the same guy that will shoot the 3-pointer on the basketball court at the end of the game. We like that.”

“Not making the playoffs last year for the first time in a long time drives us to make a deep run,” Gunville said. “It’s our last year. We want to do something special.”

Upperclassmen will also work in the trenches. Olson and senior lineman Dylan Vigested will protect the left side, senior Preston Jones will play center, and junior Isaac Fernandez and senior Riley Lefever will guard the right side.

Because of his college commitment, this season will be Gunville’s last on the gridiron.

“I’ve learned to never take anything for granted,” he said. “Anything could happen at the snap of a finger. An injury or something could pop up. So you take every day, play like it’s your last and have fun with it.”

Minot returns a host of defensive talent from last season, as linebacker Ashton Hillman is the only starting junior. Senior middle linebacker Derry Lentz earned postseason recognition, and the Magi will also bring back three out of four starting defensive backs.

Jacobson and senior Triston Emke will hold down the cornerback positions, while Butz and senior Logan Fisher are slotted in the safety spots.

Lentz and fellow senior linebacker Quaid Frantsvog also split time at the tight end position, but Lentz is counted upon as a defensive anchor.

“I wouldn’t say we have a chip on our shoulder,” Lentz said. “But I would say we’ve got a lot of people to prove wrong. A lot of people that doubted us before. Maybe we’ll change their opinion on us and overcome some difficulties from last year.”

Minot High is the largest high school in North Dakota. Passionate fans will pack the bleachers to watch the Magi perform under the Friday night lights.

Holmen reminds the Magi of how fortunate they are to put on their pads and represent their community.

“There’s people out striping our field,” he said. “We have equipment people, custodians and we have a whole cheer team that works hard. We have administrators and teachers, and we have a million-dollar field coming our way pretty soon. And there’s the band. What a privilege to be a part of this team.”

The Magi will kick off their season at 7 p.m. this evening against Grand Forks Red River. The out-of-region game will be played at Minot State’s Herb Parker Stadium, as the “Magic Carpet” turf at Duane Carlson Stadium is nearing completion.