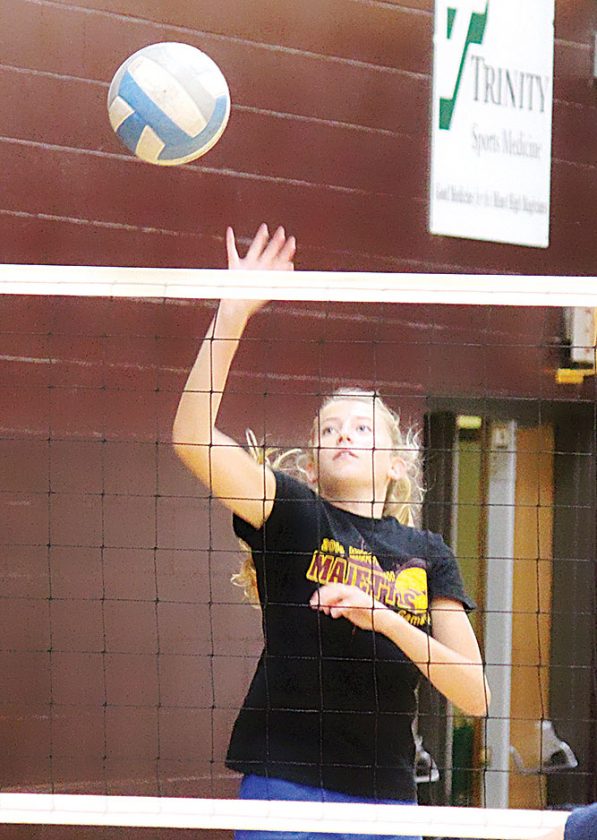 Alex Eisen/MDN Minot High senior Allie Nelson hitting the ball over the net during practice this week in Minot.

Recently at state tournaments, Minot High volleyball coach Sherry Carlson has been left to wander the sidelines — frequently taking statistics while watching the action as a spectator.

Carlson has been biding her time, patiently waiting.

Coaching, not working, at the state tournament remains the goal.

Last year, Carlson didn’t have to travel far. The state tournament was at the Minot State Dome for the first time since 2015.

The Majettes eagerly wanted to represent as the hometown Class A team, but once again couldn’t make it out of the West Region.

Minot High volleyball last made a state tournament appearance in 2011. Carlson was still the head coach at Our Redeemer’s at that time.

“With this group, we are focusing on the process that it’s going to take to get (to the state tournament),” said Carlson, who enters her fourth season at the helm for the Majettes. “If we commit to that process, we should be there.”

“We are really excited to play,” Nelson said. “We graduated a lot of seniors last year, but we have a lot of younger girls who will step up and contribute to the team.”

Senior middle blocker Michaela Nelson has been brought up from the junior varsity team, along with juniors Reese Terrel, Preslie Everson and Jenna Hardy. Setter Cambry Frantsvog is the lone sophomore on the team.

“We have a lot of players that were on the bench last year, but they have earned a position,” Carlson said. “The biggest thing I see with this group of girls is they aren’t afraid to run multiples. That has been difficult for us, as the girls get a little nervous and they won’t run the ones, chutes and quicks. All the multiples outside of just a high, outside set. These girls are willing to do that.”

So, expect a more diverse Majettes’ attack this season, and plenty of optimism to go along with that.

“We just have to play our game and not worry about the outcome,” Wheeler said. “I think this year we will be pretty good. We have been working toward (the state tournament) for a long time. I think this might be the year.”

Defensively, there are always improvements that can be made.

“I feel like defense is never, never done,” Carlson said. “Even when you have a great game of serve-receive, the next game you could struggle. It’s an art that takes a long time to master.”

Defending four-time state champions Bismarck Century are the favorites to repeat. The Patriots were ranked first in the preseason WDA Coaches’ Poll despite losing senior standout Lauren Ware, who tore the ACL in her left knee during a preseason volleyball tournament.

“I know they lost Lauren, but they just have such a strong program,” Carlson said. “They have so much depth.”

Minot High was ranked seventh in the poll, behind the likes of Century, Jamestown, Mandan, Bismarck High, Legacy and St. Mary’s.

“I hope we can challenge them all, as much as we can,” Carlson said.