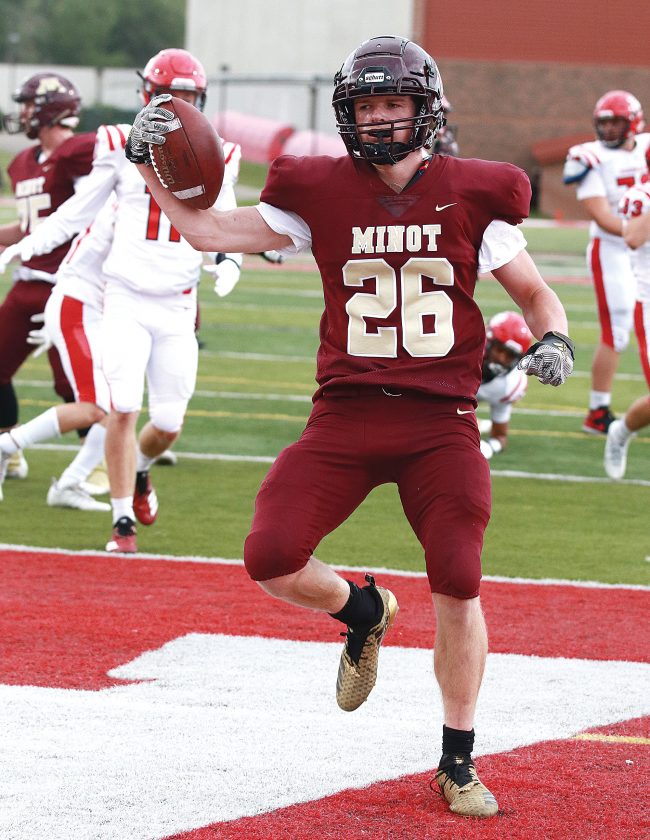 Once Payton Philion got going, he never looked back.

The senior running back scored two touchdowns in Minot High’s 14-12 victory over Grand Forks Red River. The Magicians football team moved to 1-0 with the out-of-region win, while Red River dropped to 0-1.

“Obviously, playing with any of these guys feels awesome,” Philion said. “I don’t know how to even explain it. It just feels so good playing with my brothers. We’re one big team. We live, die and play football. That’s our game.”

The game served as the Magi’s home opener, but it was played at Minot State’s Herb Parker Stadium. The “Magic Carpet” turf at Duane Carlson Stadium will be ready for Minot’s next home game against Mandan on Sept. 13.

Philion struck in the first quarter, punching in a nine-yard run with 3:31 remaining. The Magi defense thwarted multiple Red River fourth down-conversion attempts in the first half. 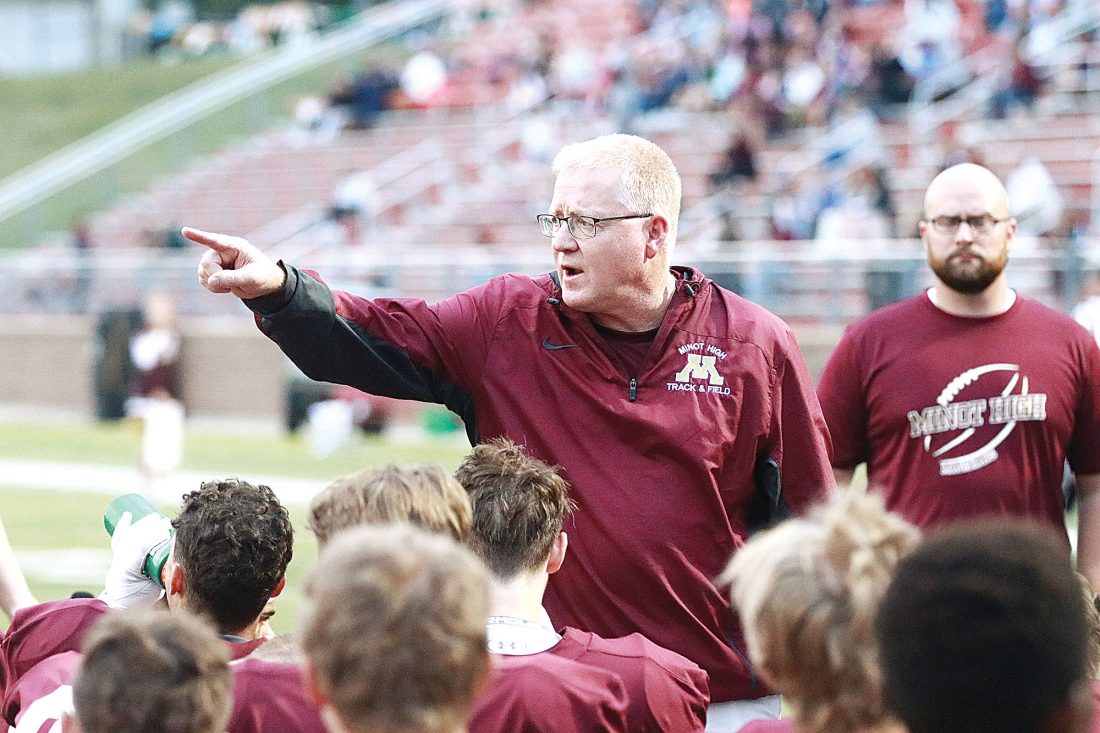 Jimmy Lafakis/MDN Minot High head coach Barry Holmen speaks to the Magicians during halftime at Herb Parker Stadium. Minot moved to 1-0 after its 14-12 victory in its season opener.

The opening stanza was reminiscent of the teams’ last matchup, as Minot earned a 47-28 victory in Grand Forks last season. During that game, Philion rushed for six touchdowns.

The game was sloppy at times, as both teams attempted to shake off early-season rust. Minot senior quarterback Jaxon Gunville threw three interceptions in the first half.

On the sideline, Red River senior linebacker Justin Erickson urged the Roughriders to play with more “fire in the belly.” The upperclassman’s message seemed to strike a chord with the visitors.

The ensuing kick was blocked, and Minot led 7-6 at halftime. Senior defensive back Johnny Butz snagged an interception early in the second half, and Philion scored his second rushing touchdown shortly after.

His second touchdown came from 10 yards out.

“I’m just really impressed with how we all played,” Philion said. “We’ve come a long way. We have worked hard, and I think we deserved it.”

The Roughriders answered with a Monette-Cole Benson connection. After the senior wide receiver scored the nine-yard touchdown, the two-point conversion attempt was thwarted.

That incomplete pass proved to be quite critical.

Both defenses held strong throughout the entire fourth quarter, surrendering no points. Philion punched the ball up the gut several more times late in the game, and Gunville kneeled out the clock to earn the 14-12 win.

“We didn’t have a lot of success throwing tonight,” Holmen said. “But on occasion, we got a couple fourth-down conversions with catching hitches on the sideline and things like that. It was enough. We weren’t well-balanced, but we were enough-balanced to eke it out.”

The Magi will travel to West Fargo Sheyenne next week for their final out-of-region contest, while the Roughriders will host Bismarck High. Both games are set for 7 p.m.

Jimmy Lafakis/MDN Minot High head coach Barry Holmen speaks to the Magicians during halftime at Herb Parker Stadium. Minot moved to 1-0 after its 14-12 victory in its season opener.