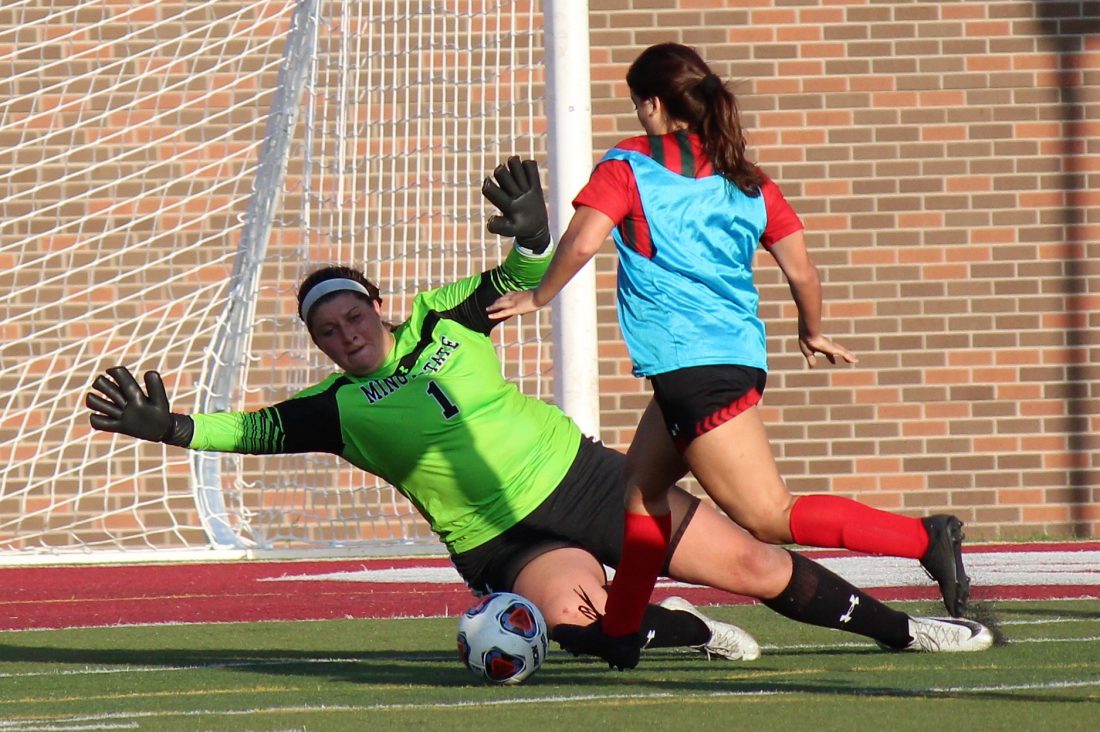 The Red and Green Soccer Preview event ended in a 1-1 draw.

“We got a lot to work on, but it’s Day 1,” MSU first-year head coach Chris Clements said. “There were some good things… We had a couple of freshmen creating a lot of opportunities, so it’s always nice to see that confidence and individual creativity. The attack was pretty good at times.”

The opening goal was scored less than two minutes in, and it was apparent that a change was needed. And no, it had nothing to do with the personnel.

The home and away jerseys for the Beavers were too difficult to distinguish. The red-and-black color schemes clashed together and caused some early confusion.

Looking around the field in the first minute of the game, junior forward Sofia Lewis could be heard talking to herself.

A defensive miscue, possibly due to the similar jerseys, allowed senior forward Daniela Fonseca to slot in a wide-open goal just a minute and a half into the contest.

“We are still figuring out what we have,” said Fonseca, who scored one goal in nine appearances last season. “It’s exciting because we are kind of stepping into uncharted territory that we haven’t really dealt with in a while. It will be a good challenge for us.”

The team that conceded the goal ran over to the bench and started dispersing light blue scrimmage jerseys.

Problem solved. They didn’t give up another goal.

MSU senior goalkeeper Erin Rafferty made a handful of difficult saves in the first 30-minute half for the team that was leading before being replaced in the second half.

Lewis, who led MSU with 16 goals last season, found the equalizer with 13 minutes left in the second half. She dribbled past one defender and hammered home a low-driven shot to the far post.

“So far, we are looking pretty good considering half of the team is new,” Lewis said. “We don’t really know how each other plays yet after just the first day. But, I have high hopes.”

The Beavers head to Colorado this weekend to face Metro State on Friday and the University of Colorado at Colorado Springs on Sunday.

The home opener is Sept. 13 against No. 12-ranked Ferris State (Michigan) with a 7 p.m. kickoff from Herb Parker Stadium.