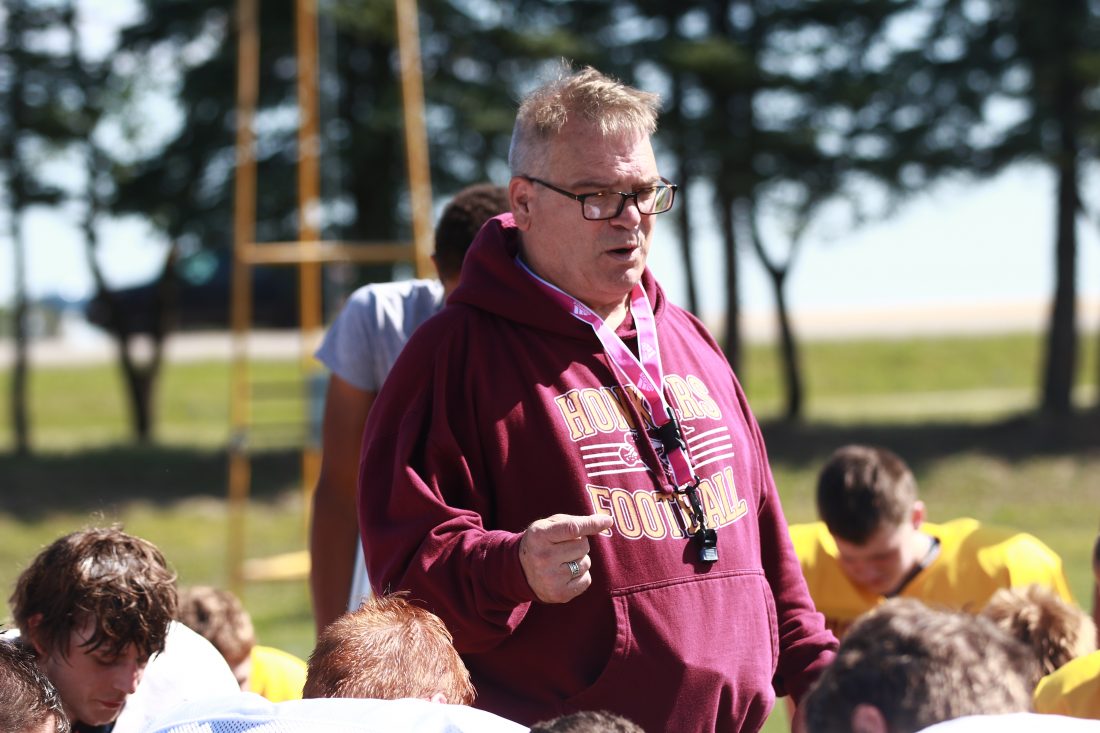 Jimmy Lafakis/MDN Head coach Rick Lindblad speaks in a huddle at the end of a practice. The Honkers will host Westhope/Newburg/Glenburn on Aug. 30.

KENMARE — When Rick Lindblad served as New Town’s principal, he attended football games to support the student-athletes. One particular team stuck out in his mind — the Kenmare Honkers. He wondered what the heck a Honker was.

Now, he’s in his first year as Kenmare’s football head coach. Lindblad now knows that the nickname comes from the wild geese honored every year in the town’s annual GooseFest.

Players from Bowbells and Burke Central join Kenmare. Lindblad, who was an assistant coach last year, serves as both the principal and superintendent at Burke Central.

“The community is hard-working,” he said. “I don’t see the (Kenmare players) during the school day, but during practice, they work hard. They’re just really smart. We’ve given them a lot of different stuff, and they’ve picked it up really quickly.”

The Honkers emphasized two-a-day practices during their first week. They ran 87 plays during their practice on Monday, essentially simulating a full game.

Kenmare/Bowbells/Burke Central parents often gather to greet their children after practices. That’s not the only time they see their Honkers during the scorching summer workouts, however.

Lindblad also holds what he calls an “open-door-policy,” as he welcomes parents to watch practices.

“It’s not like you’re coaching in a gym,” he said. “What are you going to do? You don’t want barriers placed. You want parents to feel comfortable.”

Earlier in the summer, players at all levels bonded through summer conditioning. They wanted to put in extra work, something that wasn’t so prevalent over the past few seasons.

“During lunch breaks in here, you don’t see guys separated,” assistant coach Joey Rodin said. “You see them all sitting together and hanging out. That’s something you didn’t see over the past couple of years. It’s been a really nice change.”

The offensive linemen must shoulder the load in the trenches and set examples for the younger players.

“I’ve enjoyed it because it’s fast and it goes by quicker than you would think,” Stroklund said. “As a sophomore, I thought I had plenty of time left. Now, as a senior, I have eight games guaranteed. It’s amazing to me.”

When Feldman was a seventh grader, he looked up to all the older leaders. Now, young players seek advice from him.

“I have to step up to the plate a lot more this year,” Feldman said. “The other day, I helped a couple of guys out with offensive line drills. We just worked on their steps and made sure everything was perfect.”

Stroklund, Lautenschlager, Witt, McNeiley and Thingvold earned all-conference honors last season. While those accolades stand out, Lindblad said he doesn’t use any mottos or mantras to hype up his team.

He lets the Honkers’ play do the talking.

“I’ve learned patience and fundamentals win,” Lindblad said. “You can’t cut corners. If you cut a corner in practice, it will show in the games. Talk is cheap.”

Westhope/Newburg/Glenburn will travel to Kenmare for both teams’ first game on Friday. Last year, Kenmare earned a 20-12 victory over the Sioux.

As the Honkers prepared for their home opener, Feldman offered some final words of encouragement to his teammates.