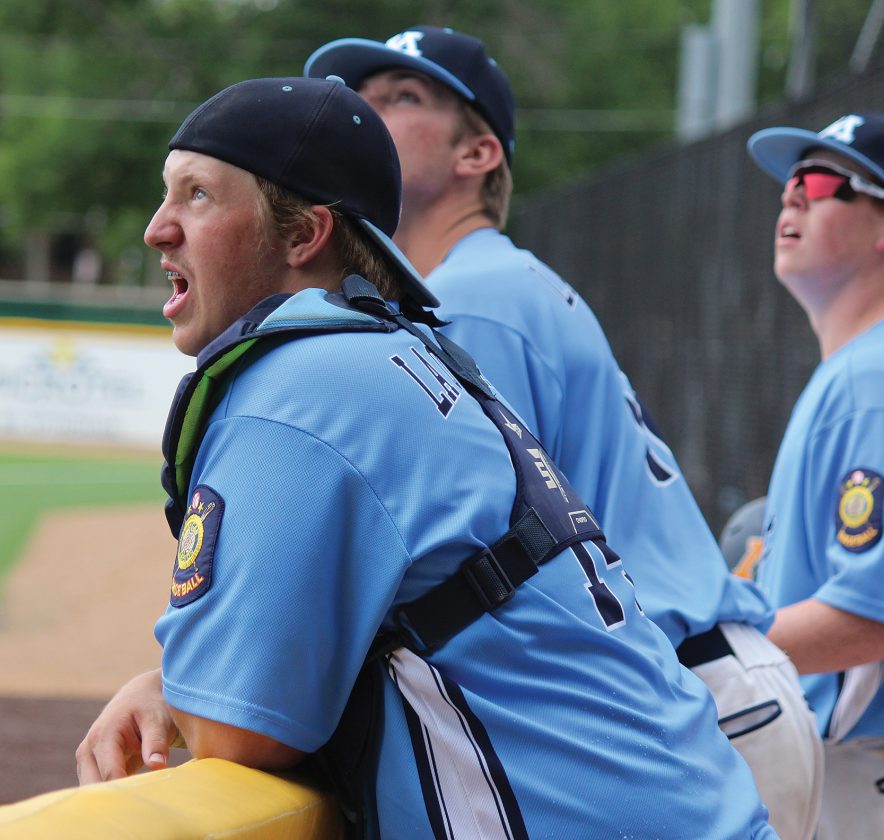 Straddling a statue of a blue moose in East Grand Forks, Minnesota, Dylan “Viggy” Vigested rattled off a personal review of his pre-game meal — the P.B.E.B, a unique burger smothered with peanut butter that’s topped with bacon and a fried egg.

“It was delicious,” Vigested said while the rest of his Minot Vistas teammates behind the camera tried to contain their laughter. “I had to sit away from Aydan (Almy) because he is allergic to it. The service was great. Mountain Dew was good, obviously. The honey mustard, very smackin’. Today, I’m going to have to give it a double with an RBI. That’s the deets on Viggy’s Big Eats.”

The fifth installment of Vigested’s culinary critique faded to black. The quest for a home run meal continues.

Vigested, an up-and-coming viral food critic and holder of a big bat in the middle of Minot’s lineup, is using the Vistas’ Twitter platform (@MinotVistas) this season to post short video clips of him reviewing food stops while the team is on the road.

“I’m a big guy with food, as you can tell,” Vigested said while patting down his stomach. “As a team, we kind of just laugh and giggle about it… It’s something to have fun with.”

Taking inspiration from the Chicago Cubs, the mastermind behind the creation of “Viggy’s Big Eats” was actually Vistas head coach Pat Arntson with some initial support and guidance from the team’s veteran shortstop Alex Schimke.

“I was texting Schimke about some stuff we could do on the road because we have a pretty reserved roster with not a lot of outgoing personalities,” Arntson said. “Vigested is one of our more vocal guys that likes to have some fun and get rowdy. So, I hit up Schimke to get his thoughts on doing something when we travel.”

Arntson’s first suggestion — previously implemented by the Chicago Cubs — was having the team dress differently for road trips, whether that was funny outfits or something more serious.

“I asked Schimke about that and he said, ‘I don’t know. The guys might think that’s funny, but I could see them not liking it,'” said Arntson with the realization that he had to go back to the drawing board.

Channel surfing in his mind, Arntson uncovered what he was looking for.

“Honestly, I watch ‘Diners, Drive-Ins and Dives’ with Guy Fieri,” he said. “So, I texted Schimke and then Viggy, ‘What do you think about doing a review on any gas stations or restaurants on the road that we stop and eat at? You just tell us what you think.'”

Vigested was all aboard, despite having no prior experience or credibility as a food critic.

The first episode was posted June 13 on Twitter outside the Petro Shopping Centers in Fargo. The video has since accumulated nearly 2,000 views in three weeks.

“He came out of the gates pretty good,” Arntson said. “But, now he is getting more comfortable about where the reviews are going. The first one I was like, ‘That’s pretty good, but you just gave it your score.’ He has been using baseball terms to score things. And I was like, ‘You can’t just be done.’ He said what he gave it and that was it. End of video. You got to have a sign off or something.”

And that’s how the tagline “that’s the deets on Viggy’s Big Eats” was forged. Meanwhile, the rating system hasn’t changed.

Spoiler alert: Through the first five episodes, Vigested hasn’t given out a home run meal. He did come close in episode four with a bases-clearing triple at Chick-fil-A.

“That’s just because he likes Chick-fil-A,” Arntson said. “We were like, ‘Viggy, that was pretty weak. Not entertaining at all and pretty docile. We got to pick it up, you got a following now.’ So, the next one he jumped on that moose. The problem is he started so well that he can’t mail it in now. People are expecting something.”

As his fan base grows, Vigested has embraced the pressure that comes with producing original content.

“Wherever we go, I try to be creative with it,” Vigested said. “Jump on a moose or something. Just have fun with it.”

At the end of the day, or in this case a long road trip, having fun is what American Legion summer baseball – and sports in general – should be about.

“Everyone talks about baseball as the game that’s behind everyone in terms of entertainment, enjoyment and having fun,” Arntson said. “So, we are just trying to add some of that and it gets some eyes on our guys. We have gained so many new followers on Twitter because of it.

“Now, we have more people paying attention to summer baseball. As long as we work hard and play hard, we will do fun stuff like this to show people it’s not so scary to come work hard on baseball.”

What Vigested will do next remains to be seen as the Minot Vistas travel to Pierre, South Dakota, this weekend.

Rumor has it, though, there is one restaurant in particular that could possibly produce the elusive home run review.

“I’ve been saying it, but I think it has to be Red Lobster,” Vigested said in confirming the rumors. “But, they got to take me there.”