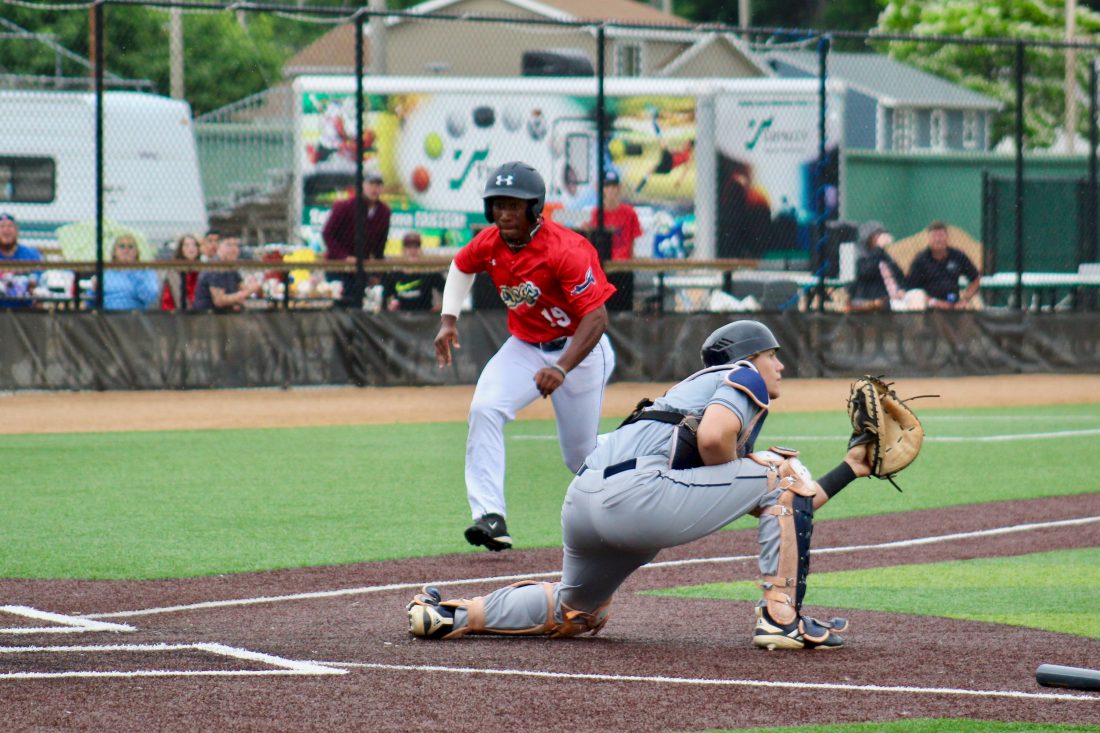 Ashton Gerard/MDN Souris Valley's Phillip Childs (19) sprints home in an attempt to beat a passed ball during the first inning of an Expedition League game against the Wheat City Whiskey Jacks Thursday at Corbett Field.

The Souris Valley Sabre Dogs got their tenth win in a row with an 8-0 win against the Wheat City Whiskey Jacks. This marks their second-largest winning streak in franchise history. They are just three games away from tying their 13-game win streak last year.

It was a perfect Independence Day for the Sabre Dogs as they were able to get the better of the league’s only team from Canada. They were able to sweep them in a doubleheader in Brandon, Manitoba on Canada Day. The Sabre Dogs stayed hot and beat them again on America’s birthday.

Solid hitting has been consistently complimenting the team’s improved starting pitching which has solidified an identity for itself half-way through the season.

George Loxtercamp got his second complete-game of the season, and his first complete-game shutout. He became just the fifth pitcher in the Expedition League to throw multiple complete games this season. This was also the league’s 20th complete game this year. “The Red Lobster” allowed three walks and three hits with three strikeouts.

The offense was able to produce ten hits with their eight runs. Crews Taylor was just a triple shy of the cycle with a solo home run in the bottom of the seventh. He is now tied atop the league with the most homers (7). Phillip Childs stayed hot and went 2-for-3 with a run, an RBI, and two stolen bases. He is now 6-for-7 in his last two games.

The Sabre Dogs will go for the sweep tonight at 7:05 p.m. before a five-game road trip in Casper, Wyo. and Aberdeen, S.D.