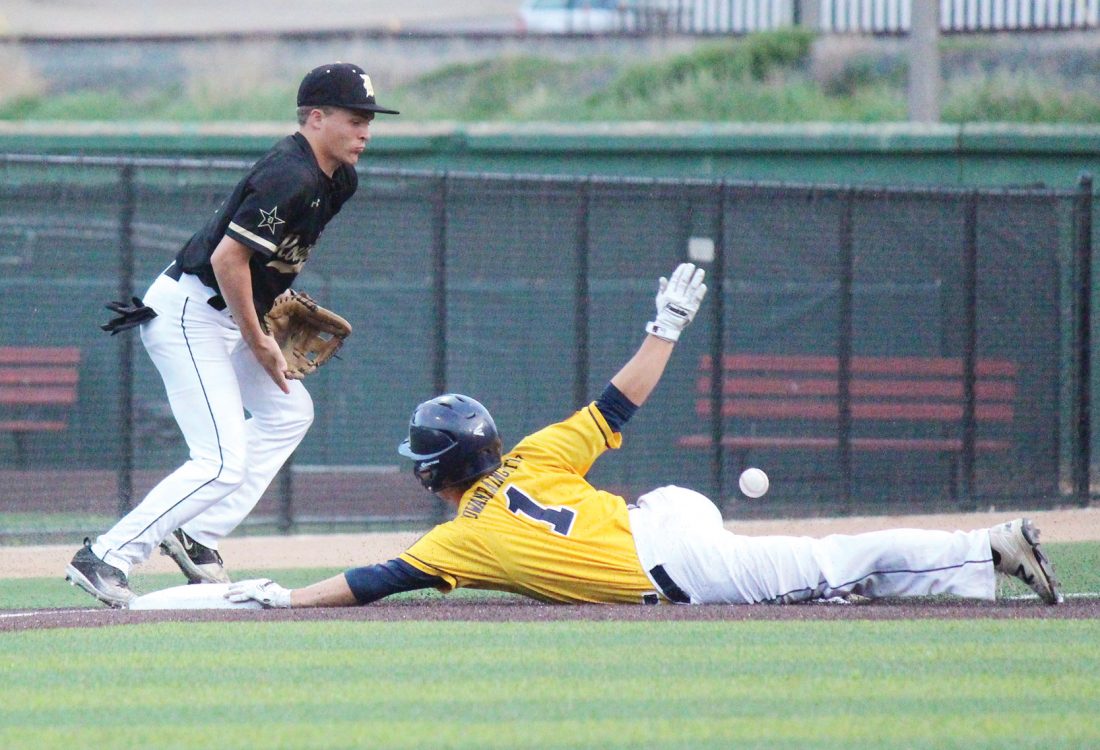 A 12-run inning, an untimely downpour and an extra inning walk-off winner.

Tuesday’s doubleheader at Corbett Field was bizarre, to say the least. An early season lesson in expecting the unexpected.

After leading 11-0 in the first game, the Minot Vistas (4-2) lost the opener 15-12 against the Dickinson Roughriders. The nightcap that followed went well into the night. In the eighth inning, after surviving a brief rain shower, Minot’s Brock Nesheim delivered a game-winning RBI single to lift the Vistas to a 3-2 victory.

“Baseball is an interesting sport because stuff like that happens all the time,” Nesheim said. “It can go from 90 degrees and very humid outside to 60 degrees and raining at any time. We have to stay focussed no matter what happens. And that 11-run lead we gave up that first game is not acceptable.”

The Vistas didn’t take getting plunked by three separate pitches in the first inning very lightly. Minot made Dickinson starting pitcher Cody Maier pay with a pair of RBI singles by Derek Nygaard and Dylan Vigested, scored one run on a bases loaded HBP and Calvin Watkins cleared the bases with a three-run triple. 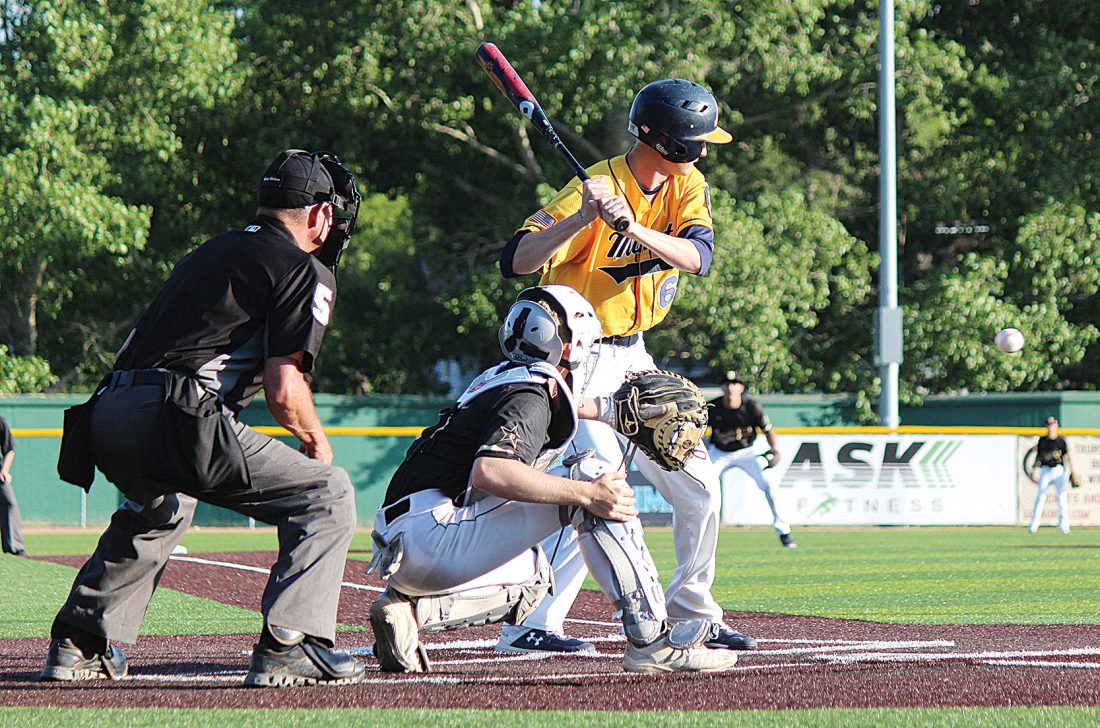 All six runs were scored while facing two outs.

Maier had more than enough distance to get two runs back for himself in the third inning, but the deep shot hooked foul.

After dodging that bullet, the Vistas racked up five more runs in the bottom half with only one hit. Runs crossed home plate on a pair of passed balls, a hit by pitch, a walk and Alex Schimke grounded out for an RBI.

Vistas starting pitcher Dylan Buchanan, who played the hero on Monday with a walk-off home run, surrendered his first run on Tuesday in the fourth inning off an RBI single by Landon Aman.

Maier, holding off the mercy run-rule, picked up an RBI single in the fifth. Shortly after, Troy Berg and Kobe Krenz added RBI sacrifice flies.

Coming off the bench, pinch hitter Jaren Hugelen continued the improbable rally with a two-run single back up the middle, 11-6.

Buchanan was replaced on the mound by Kyler Stenberg.

The Vistas were nearly out of the inning with a two-out strikeout, but a dropped third strike brought in another run and kept the inning alive.

Batting around, Maier stepped back up to the plate with the bases loaded. Making up for the 11 runs given up on the mound, the slugging pitcher straightened out a bomb to left center.

Nathaniel Jilek put the finishing touches on the staggering 12-run inning, and gave Dickinson its first lead, with a two-run triple.

“We are just pushing the wrong buttons and it’s snowballing for us,” Vistas head coach Pat Arntson said. “We can’t stop it once it gets moving. And sometimes we just hang out and wait to see what happens, instead of forcing the issue.”

Berg replaced Maier on the mound after two Vistas reached base in the bottom of the fifth inning. He gave up an RBI single to Jack Plemel, but kept the lead intact as the Vistas left the bases loaded.

The Roughriders plated two more runs in the sixth, including an RBI triple by Maier. His sixth RBI of the game.

Three bang-bang plays at first base halted Minot from making a comeback in the seventh inning, and ended the contest at 15-12.

Both offenses cooled off in the second game of the doubleheader. After two hitless innings, the Vistas opened the scoring in the third inning with a pair of RBI singles by Stenberg and Plemel.

Dickinson answered in the fifth. Maier, still swinging a hot bat, smacked an RBI triple over the head of center fielder Chase Burke and Berg brought him home with an RBI sacrifice fly, 2-2.

Burke got his revenge the following inning. With two outs and runners on second and third base, a bullet to the gap in left center ended up in the glove of a diving Burke to keep the game tied.

Going to the seventh inning, the skies opened up and a heavy rain storm rolled through Corbett Field. The game went on. A winner needed to be decided.

“I was surprised by how little of an effect it really had,” Arntson said. “It didn’t seem to play a role. Guys were catching fly balls. Pitchers were throwing strikes. There were a couple of ground balls that were picked up and thrown across the infield.”

Two more defensive gems — a diving stop by shortstop Merck and a catch up against the fence in foul territory by Plemel — allowed the Vistas to bat in the bottom of the eighth still tied at 2-2.

When the rain subsided, Minot ended the game.

Relief pitcher Nesheim, who replaced Schimke after a solid outing, stepped to the plate and found the hole between the shortstop and third baseman to score the game-winning run.

“I just saw an opportunity I had to take advantage of,” Nesheim said. “I went out and put up a zero and then drove in the winning run. It felt nice.”

Next up, the Minot Vistas head down to South Dakota to compete in the Dakota Classic tournament being held June 14-16.