Tumbling into a win 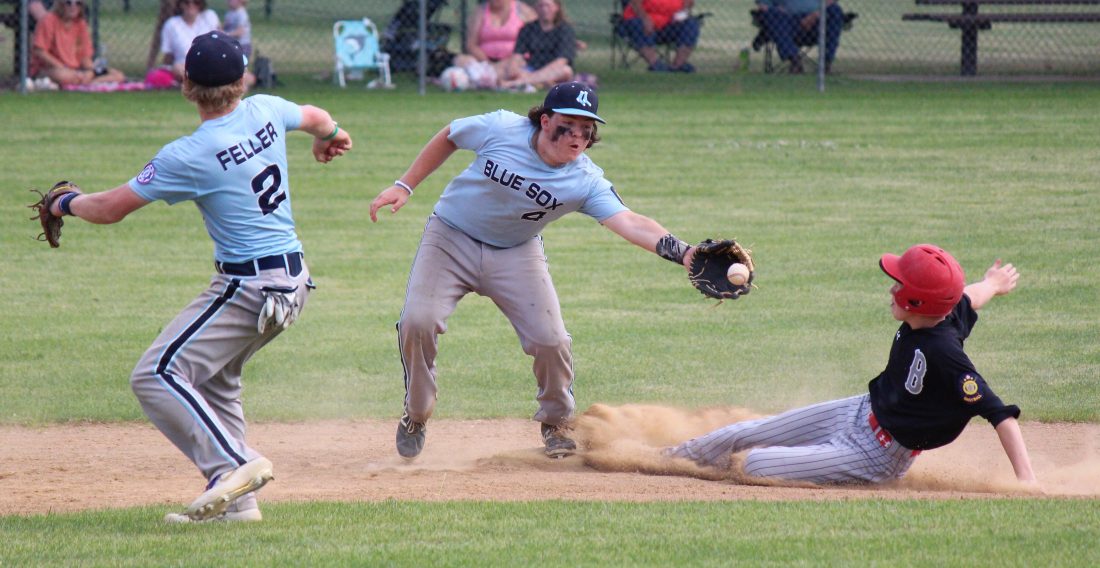 Alex Eisen/MDN Surrey’s Collin Headrick (center) reaches to bring in the ball while a Burlington runner slides into second base Friday evening at the Burlington Sports Complex.

BURLINGTON — The most talked about play in Friday’s American Legion Class B doubleheader between the Burlington Bulldogs and Surrey Blue Sox unfortunately didn’t even score a run.

Surrey’s Dalton Anderson unintentionally showed off some acrobatics that left everyone in attendance at the Burlington Sports Complex both confused and concerned.

Eventually, the humor of the whole situation surfaced too.

“My teammates were yelling slide and I knew the ball was behind me,” Anderson recalled. “So, I was like, ‘OK, I have to slide.’ But, then I saw the catcher go way off from the plate. So, I was like, ‘I guess I don’t have to slide.’ I got caught in a sequence where I just stopped, my leg straightened out and I did a somersault over home plate.”

The throw home wasn’t even close, but Anderson was still tagged out as he laid on his back after completely missing the plate.

Surrey overcame the bizarre tumble and a late seventh-inning rally to top the Bulldogs, 8-6, in a regional counter game Friday evening in Burlington. The final score of the second game, which didn’t count in the regional standings, was more lopsided. Surrey won 15-1.

“The bats were better today,” Surrey head coach Kelly Wetzel said after the first game. “Our defense wasn’t quite where I want it to be, but overall it was a good game.”

A scoreless pitching duel between Burlington’s Arron Grandy and Surrey’s Collin Headrick last for two and a half inning.

Burlington got on the board first with an RBI sacrifice fly in the third, as the runner on third base tagged up and scored before the Blue Sox managed to get another out on the play for a double play.

Surrey was a couple feet away from tying the game in the fourth inning on what should have been an RBI single, but that’s when Anderson tumbled into his awkward front flip somersault.

“I was scared he broke his ankle,” Wetzel said. “If I wasn’t scared that he was hurt, it was pretty funny. I hope he is OK. He has a sore ankle, so we (eventually) did take him out of the game… But, yeah, I have never seen anything like that.”

Despite the untimely mishap, the Blue Sox still scored three times in the inning to grab a 3-1 lead.

But, that didn’t mean Anderson’s teammates were going to let him off the hook for what had just happened.

Anderson reached base with an infield single in his next at-bat.

“Do a flip,” someone from the Surrey bench hollered.

Anderson stole second base, and later slid in to steal third as well.

“Nice slide” and “he had to make sure he still knew how to slide” could be heard from a sarcastic Surrey dugout.

“Yeah, they really liked that,” Anderson said about his teammates having a laugh at his own expense.

Due to precautionary health concerns, Anderson was pulled out of the lineup shortly after.

“It hurt a little bit,” Anderson said after the game with dirt stains on the front and back of his jersey. “I tweaked my ankle and knee running after that. I could tell with my ankle and then sitting in the dugout my knee was getting a little sore.”

Clutch two-out hitting from Ryan Albertson, a two-run single in the bottom of the fifth, tied the score at 3-3.

The Blue Sox regained the lead in the sixth with a five-run inning that was highlighted by RBI hits by Jayden Wetzel and Mitchell Seopa.

Burlington battled back with its final at-bats in the seventh. Grandy smacked a two-run double and William Mayo came through with an RBI single to cut the deficit to 8-6.

The Bulldogs, however, left the bases loaded to harshly end the valiant comeback attempt.

“Burlington is coming around,” Kelly Wetzel said. “They got a young team, but they’re solid and a well-coached team. They got better from the last time we played them, for sure.”