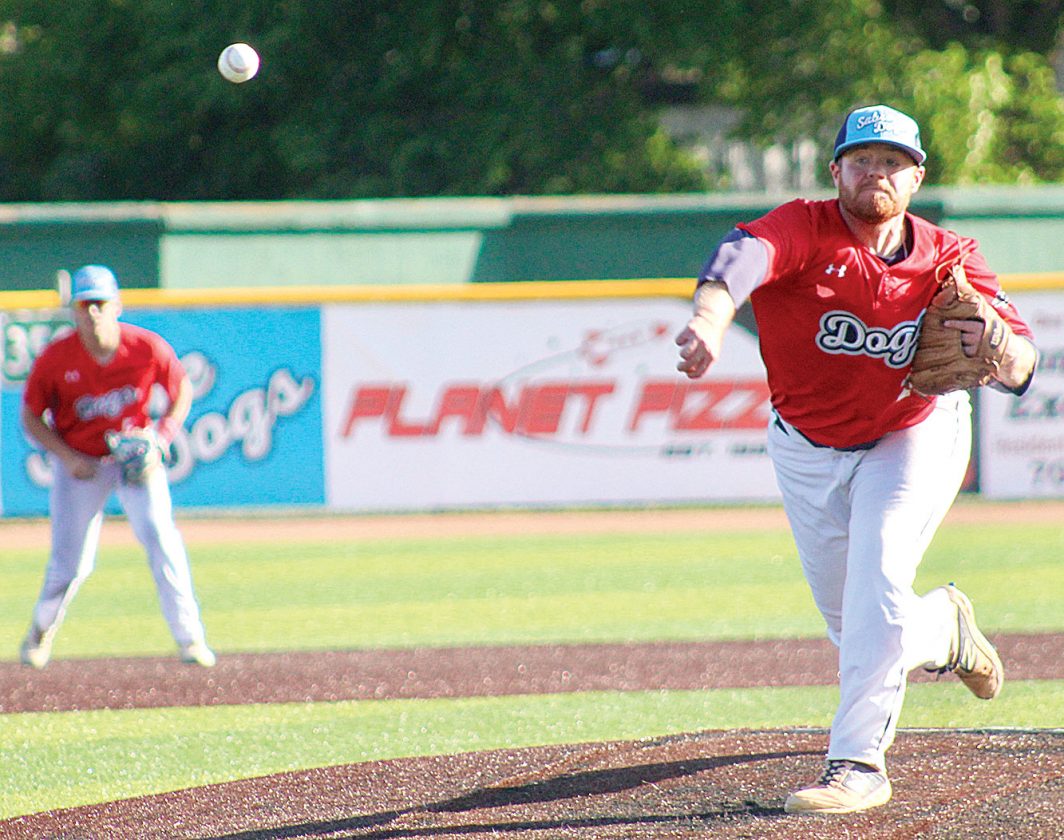 Justin Martinez/MDN Souris Valley pitcher Cody Waters sends a throw toward the plate during the Sabre Dogs’ home game against the Badlands Big Sticks on Wednesday at Corbett Field.

The odds were stacked against Cody Waters, but he was up for the challenge.

The Souris Valley pitcher normally enjoys the role of the reliever for the Sabre Dogs, but a shortage of throwers suddenly presented him with the task of making his first start for the team on Wednesday. His opponent: The division-leading Badlands Big Sticks.

Sam Powers gave the Sabre Dogs a 1-0 lead in the second inning with an RBI groundout, and Waters did the rest. The reliever-turned-starter made every hit a struggle in the early going. With a killer trio of curveballs, fastballs and sliders, Waters led his group to a one-run stalemate through four innings.

“I was throwing all my pitches for strikes,” Waters said. “My curveball was a little rusty out the start, but I found it. My slider kept me in counts, and I was spotting up my fastball pretty well. It was fun. I hope I can get another start.”

But, little did Waters and company know, a storm was coming in the fifth inning.

The Big Sticks finally cracked the code against the Sabre Dogs’ seemingly impenetrable defense and erupted for four runs to take a commanding 5-1 lead. The home squad never recovered, and Badlands secured the 5-1 victory.

The first run for the Big Sticks in the fifth inning came free of charge when a wild pitch by Waters smacked the wall behind the catcher and allowed a runner to come home.

The next run came courtesy of Garrett Dupuis, who sent a towering shot into right field for a sacrifice fly.

Then, even more misfortune struck the Sabre Dogs when Brayden Olson hit a blooper to left field. Souris Valley’s Tyler Rice misjudged the bounce and watched in horror as it sailed over him, took another bounce and cleared the fence for a ground rule double to push the Big Sticks’ lead to 4-1.

Finally, Ben Thoma delivered the knockout. With a swift swing of the bat, the catcher connected on a pitch from Waters and sent it to left center field for an RBI single to give his team a 5-1 edge.

“We made some mental errors that (fifth) inning,” Souris Valley head coach Corey Thompson said. “It wasn’t necessarily just (Badlands) hitting us…We let that one slip away, for sure.”

Badlands’ defense kept the Sabre Dogs off the board the rest of the way en route to a 5-1 win despite the home team having runners in scoring position three different times.

Souris Valley won’t have to wait long for its chance to exact revenge, though, as it has a date with the Big Sticks tonight at Corbett Field. The Sabre Dogs will try to find their offensive groove with the season still very much young. First pitch is set for 7:05 p.m.

“It’s still early in the season,” Waters said. ‘The bats will come around, and we have more pitchers coming. I think we’re going to be fine.”