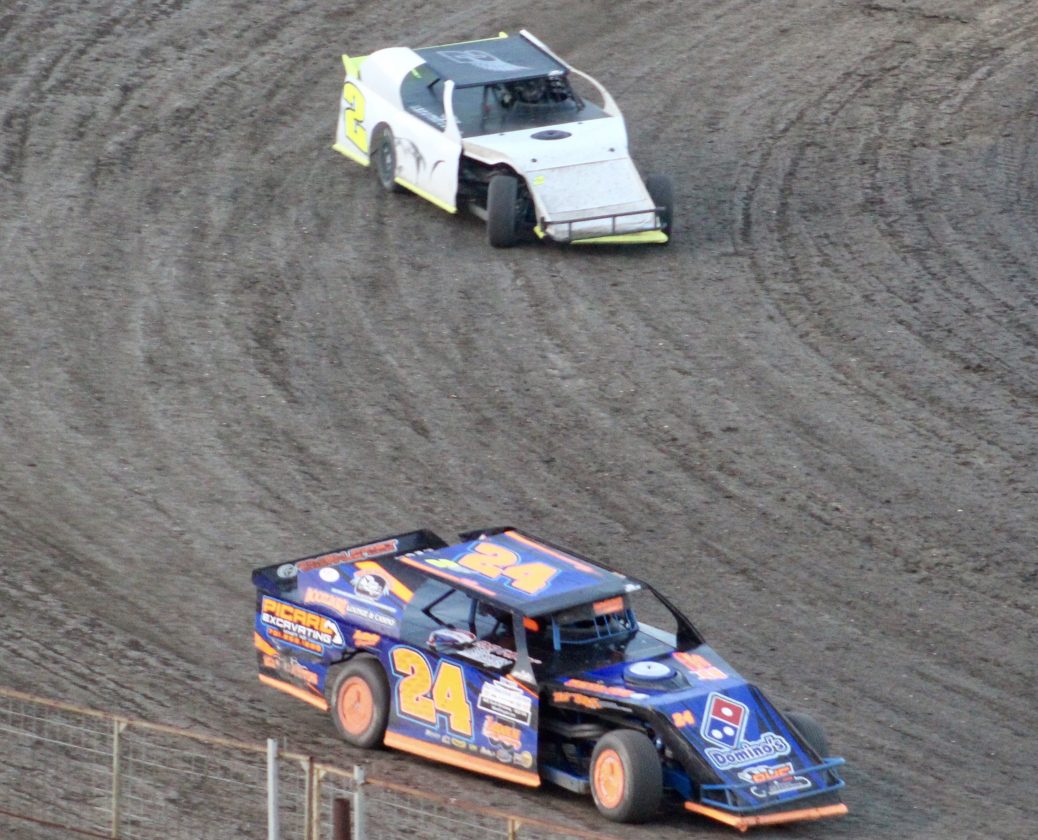 Andrew Bertsch had one thing on his mind: Survive.

Slowly but surely, racers got picked off on Sunday in the main feature of the Hobby Stock class at Nodak Speedway. Some begrudgingly made their way to the pits due to car problems. Others drifted off the track in a cloud of dirt. The less fortunate were towed away after a collision with a fellow racer.

Nobody was safe. Nobody, that is, except for Bertsch.

“Luckily all the cautions were behind me, so I didn’t have to deal with a lot of that,” Bertsch said. “It is scary, but I just tried to keep my head in it until it was over.”

When it was all said and done, just 15 of the original 23 racers were left with two laps to go. In the front of the now-depleted pack was Bertsch.

The final yellow flag cleared up, and the mad dash to the finish line ensued. The Minot native quickly separated himself from the cluster of cars and stayed there, building a significant lead as his No. 146 car raced down the home stretch.

“It was a pretty great battle for the lead there,” Bertsch said. “But it was fun. It was a different track than I’ve had all year, but I liked it.”

Caution flags continued to plague the track on Sunday as three other racers joined Bertsch in the winner’s circle in the latest installment of the Magic City Dirt Series.

Next to claim top honors was Kelly Henderson, who rose above an equally-chaotic Sport Mods main feature.

After being halted by what seemed to be a yellow flag every other lap, Henderson and the remaining racers finally got the green flag for the last three trips around the track. In a blur of navy blue and neon orange, the Minot native’s No. 24 car crossed the finish line to claim first place.

The win marks the red-hot racer’s third victory this weekend.

“There were a lot of cautions and fast guys behind me, but I just tried not to mess up,” Henderson said. “Erik Laudenschalger, the No. 49 car, actually helped me change something on the car before last weekend. Ever since then, we’ve just been getting the car better and better. It’s just really fast right now.”

Greg Zenz proved to be the third winner of the day in what was the most undisturbed race of the night in the Sport Compacts main feature. The Max native prevented Corey Helgeson from becoming the third straight Minot native to win on Sunday and forced him to settle for second place.

Finally, Tom Berry, Jr. ended the day with a first-place finish in the Modifieds main feature. Robert Hellebust finished right behind him to secure second-place honors.

The Magic City Dirt Series continues next Sunday at Nodak Speedway. The action is set to begin at 7 p.m.