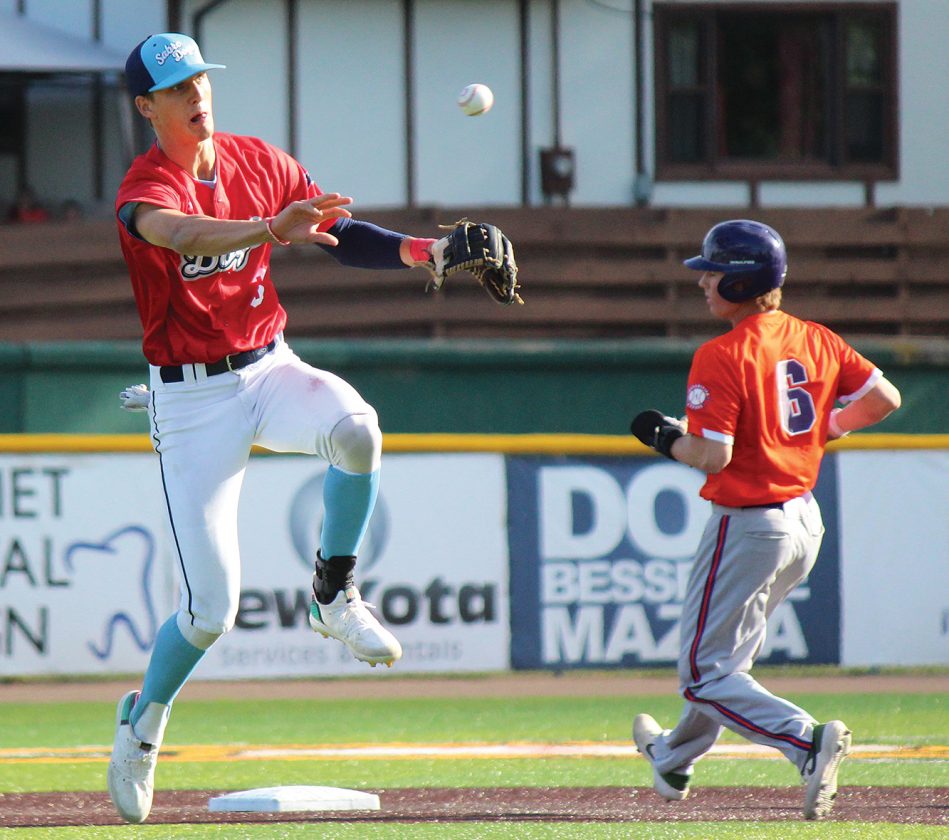 With dark ominous clouds roaming in the distance, the Souris Valley Sabre Dogs were determined to get Sunday’s game in and end their seven-game home stand on a positive note.

The Sabre Dogs (7-8) brushed off the threat of rain, with sunshine peeking through the clouds a majority of the time, and held off the Fremont Moo (6-9) for a 5-3 victory Sunday evening at Corbett Field in Minot.

“We started (the home stand) with a win and to cap it off the same way was big for us, throughout all the struggles (in between),” Sabre Dogs head coach Corey Thompson said. “We pitched pretty well today, so hats off to the pitching staff.”

First-pitch swinging Mason Dinesen opened the scoring with a solo home run to left field in the bottom of the first inning. Later in the inning, the Sabre Dogs picked up another run when Drew Pollum grounded out with the bases loaded.

“That was big for (Dinesen),” Thompson said. “He hasn’t been playing much — coming off an ankle injury — so, for him to get a good piece of it there, it’s like a breath of fresh air for him and me.”

The bottom of the Sabre Dogs’ lineup kept the runs coming. No. 9 hitter Wilson Roubion hit an RBI single in the second and No. 8 hitter Austin Rayno chipped in with a two-run single in the third to give Souris Valley a 5-1 lead.

Houlihan gave up one unearned run in the third inning off an error and then went right back into cruise control mode. Houlihan held the Moo to just two hits through the first six innings.

“Today, I felt pretty good and was running through all of my pitches,” Houlihan said. “I had control over all of my stuff.”

After three scoreless innings, Fremont finally got back on the board with RBI singles by Jacob Wageman and Tyler Push in the seventh, 5-3.

The bigger concern in the inning, however, was when Sabre Dogs second baseman Rayno dove head first into the fence trying to catch a foul ball. The nasty collision saw the training staff race over immediately. But, Rayno got back to his feet, waved off the medical attention and stayed in the game.

“Tough kid. They make them tough in Kentucky,” Thompson said. “His hand is a little banged up, but he will be fine.”

Jace Mapston relieved Houlihan in the eighth and shut the door on the Moo with two scoreless frames, allowing one hit, to lock down the 5-3 victory.

“I think this is really big, considering we have been having iffy pitching outings and a little less offense than we should have,” Houlihan said. “So, it was good to see a big home run at the beginning and our momentum pick up from there.”

After getting a rare day off today, the Sabre Dogs will face the Hub City Hotshots from Aberdeen, South Dakota, in six straight games from June 11-16. The first three games will be played on the road with three home games to follow at Corbett Field.