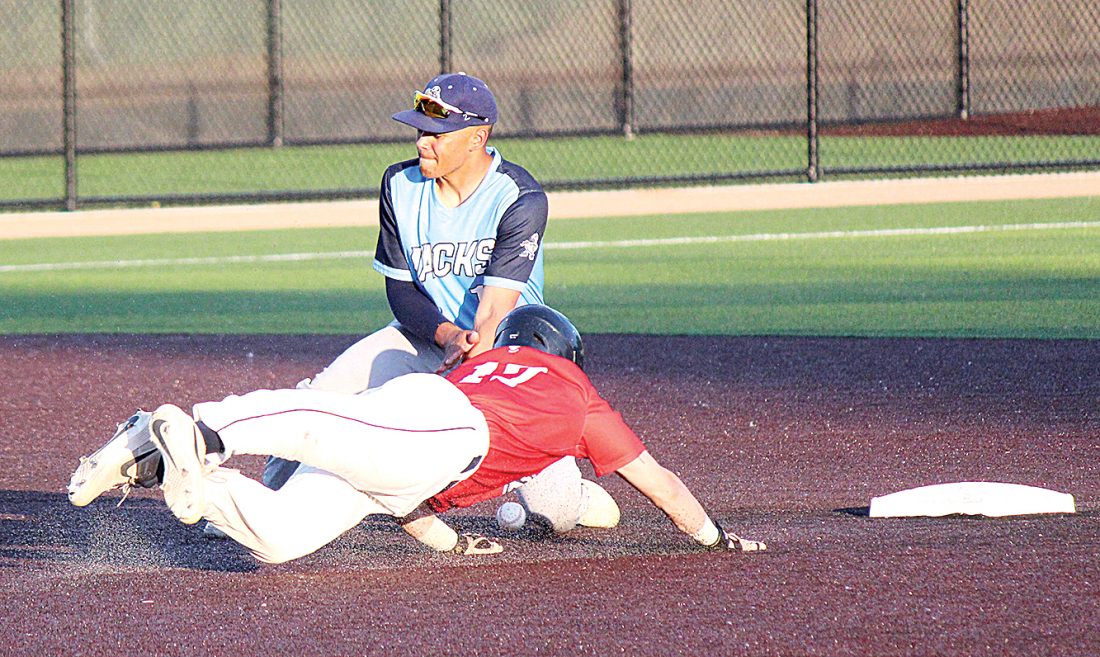 Energetic 5-foot-9 speedster Phillip Childs retreated back to first base for a fourth time. The crowd at Corbett Field let out a collective groan. This cat-and-mouse game was getting excessive.

Wheat City Whiskey Jacks pitcher Christian Arias finally gave in and threw a pitch toward home plate, and Childs fled for second base right on queue.

Safe. Another stolen base.

“It doesn’t make me antsy because I know he has to go home,” Childs said about the situation. “When he does, I’m taking that bag. After I take that bag, he is going to go home and I’m going to take the next bag. They are not going to pick me off.”

The Souris Valley Sabre Dogs (15-14) were at their best when they were stealing bases Wednesday evening against the Whiskey Jacks (6-22). The running Sabre Dogs racked up 10 stolen bases en route to a 5-3 Expedition League victory.

“That’s what we did last year (stealing bases), and tonight we kind of showed it,” Sabre Dogs head coach Corey Thompson said. “We just made stuff happen. Guys are getting more comfortable with that and are starting to learn that I won’t get mad at them if they get thrown out.”

Bases loaded in the bottom of the first inning, Alex Hay opened the scoring for the Sabre Dogs with an infield RBI single that got tangled up in the feet of Whiskey Jacks starting pitcher Colton Charnholm.

Zeros flooded the scoreboard after that with an abundance of scoreless innings.

The gridlock was lifted in the fifth inning. The Sabre Dogs ran wild with six stolen bases in the frame, which helped bring in three runs.

Childs, after stealing second and third base, came home on a passed ball, Bo McClintock lifted an RBI sacrifice fly and Crews Taylor scampered in off a throwing error after he stole third base.

“Corey (Thompson) told us before the game that we needed to steal some bags,” said Childs, who finished with four steals. “Obviously, that’s why I’m at the top of the lineup to get on and steal. I really try to implement that into my game and will hopefully take that back to school ball with me.”

Souris Valley scored all of these runs off relief pitcher Arias, who had a tendency to radically change his wind-up style and pitching tempo in an attempt to throw off the Sabre Dogs’ timing.

“I think it just pissed us off more than anything,” Thompson said. “But, we got some runs off him. He threw really well. Some people have to do that, and that’s fine. We will figure out a way to beat him.”

Wheat City cut the four-run deficit in half in the sixth inning. Reagan Doss drilled a two-run triple to dead center field where outfielder Childs nearly made a spectacular diving catch.

That was one of five hits Sabre Dogs starting pitcher Zavian Caldwell gave up in six solid innings of work. He was replaced by Nate Brenzer-Mendoza in the seventh inning with Souris Valley still leading 4-2.

Childs, continuing to do a little bit of everything, tacked on an insurance run in the eighth inning with a bloop RBI single into shallow right center field.

Closer Bradley Spooner had a little trouble wrapping things up in the ninth inning, allowing one run and a handful of base runners. But, he eventually got the final three outs to seal the 5-3 win.

“Spooner has been lights out for us all year,” Thompson said. “Probably one of the best arms in the league, but some nights you don’t have it. Glad we had more than a one-run lead.”

The Sabre Dogs conclude their current three-game home series against the Whiskey Jacks at 7:05 p.m. this evening.